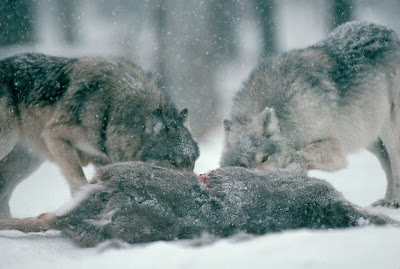 "The preferred diet of the wolf is not cooked backstrap from the pride of the herd, but raw flesh ripped from the diseased rectum of a downer cow."

I am always a bit surprised at how many people have strong opinions about dog food, and how few of these opinions are actually supported by common sense.

For example, most dog food dogmatics are focused on dog food quality rather than quantity.

And yet, quality hardly matters as most dogs in this country (even most working dogs!) can easily have their nutritional needs met by grocery store kibble or carefully selected table scraps.

Which is not to say that everything is fine in the world of dog food.

Most dogs in this country are overfed.

Fat dogs are not only losing years off of their lives, but they are also costing their owners (and this nation) billions of dollars in unnecessary veterinary bills.

Most of the problem, of course, is that people are over-feeding their dogs out of guilt for spending too little time with them.

Another factor, however, is that many modern dog foods are packed with calories which means "just a little more" may end up putting on real pounds.

Add in the chronic lack of exercise that most dogs receive, and you have the same prescription for fat pooches as for obese humans.

It's not just too many calories, of course. Modern dog food is also loaded up with vitamins and calcium, and this triple combination means many large-breed dogs are growing up faster than God intended, and as a result they are suffering from increasing amounts of nutrition-related dysplasia.

Are canine web sites and list-servs abuzz about the need to feed dogs less in order to keep them in proper weight?

They are not. Up to 40 percent of the dogs in this country are over-weight, and obesity is the number one killer of dogs and people in this country, but that conversation tends to strike a little too close to home.

Put three people in a room and talk about obesity as a health issue, and at least one of those people is going to cop an attitude: Are you talking about me??!

Which circles back to the issue of dog food. What should you feed your dogs?

My standard answer has never varied: Whatever you want!

When people ask me when I feed my own dogs, I tell them grocery store kibble. What brand? I feed Purina at the moment, but what brand does not really matter so long as it's the house brand of a major manufacturer like Purina or Pedigree which work hard to control their supply chain.

Almost none of the "boutique" dog food companies make their own foods; they contract out with a nameless, faceless companies like Menu Foods or American Nutrition, Inc.,. which have no brand or history to protect, and are entirely mercenary when it comes to production.

Purina and Pedigree, by comparison, have their own manufacturing facilities, important historical brands to protect, and a decades-long track record with most suppliers.

Why do I feed my dogs kibble? Simple: Kibble has been treated with fire.

While cooking does not cure all ills, it cures most, and that is especially important with meat. The more you know about meat -- any kind of meat -- the more likely you are to order your steaks "well cooked."

Whatever brand of big-name kibble you choose to use, one thing is almost guaranteed: your dog will end up eating better than you do.

Not only is most grocery store dog food balanced for proteins, fats, and carbohydrates, but it has probably been tested under longitudinal trials involving thousands of dogs over many years.

Can most dog owners say that about the food they eat? I think not!

As for dog food being full of snouts, lungs, udders, and shin meat, it most certainly is. It also has chicken feet ground up in it, as well as bones and beaks, and pieces of tail, testicles and cow privates.

All of this is excellent food, and most of it was "human quality" until very recently.

Of course, we Americans now turn up our nose at such stuff. We demand that all meat be the very choicest cut served on a white napkin placed on top of a foam plate. The meat must be dyed the right color to make it pleasing to the eye, and the whole thing must be shrink-wrapped, dated, bar-coded and placed in a cold packing crate near the pass-through aisle in the super market.

Only then will we buy it.

Blood and guts? Testicles and snout? Entrails and feet? Most Americans shudder at the parts of a pig or cow that nurtured our grandparents not so long ago.

Go overseas into the markets of Europe, Latin America, Africa and Asia, however, and people are still eating everything, including the squeal.

Ox Tail soup? Bones for Ossobuco? Udders for sausage? Stomachs and lungs for Haggis? Testicles for breakfast? All good food.

What is laugh-track funny are the folks who pop up in every dog food debate to talk about the diet of wolves.

Now a wolf is not a dog -- a point I have made in several posts before -- but let's let that go. Let's talk about what wolves do eat, instead.

You see, whether wolves are chasing caribou in the Arctic, pulling down elk in the Yellowstone, or stalking buffalo in Kansas, they are all doing the same thing: they are looking for the young, the sick, and the infirm.

A downer cow? To a wolf that's the dinner bell ringing.

Yes, that's right: The preferred diet of the wolf is not cooked backstrap from the pride of the herd, but raw flesh ripped from the diseased rectum of a downer cow.

Funny how that fact never makes it into all these conversations about "natural" dog foods.

Nor is it ever mentioned that wolves eat a lot of rabbit, deer and rats riddled with round worms and other parasites. Disease? A wolf likes nothing better than a diseased animal; they are so much easier to catch.

Unlike your kibble-fed dog, wolves are not eating nice bits of flesh from healthy animals that have been given vaccines, regular vet checks, dosed with antibiotics, and given unlimited amounts of high-quality feed and clean water.

But that's what our dog food is made out of.

And then, to make it even better, we stir in corn, rice, and wheat in order to increase fiber and add carbohydrates. We also add in vitamins and micronutrients, as well as preservatives to keep the whole thing fresh. Then we grind it all fine, cook it, extrude it, fire it hard into bite-sized nuggets, and put it in hermetically-sealed stay-fresh bags.

Poor dogs! If only they had quality foods!

On the other side of the forest, far from freeway and factory, the wolf is gobbling down the worm-filled intestines of his downer cow elk. He will eventually eat nearly everything -- ears, eyes, genitals, anus, snout -- but right now he is focusing on the nice soft bits in the stomach cavity.

After his first meal, the carcass will be dragged under a bush to hide it from scavengers. Later, the wolf and his kin will return to gnaw on the rotting flesh that is now flyblown with maggots.

This is the "natural whole foods" of the wolf, and it is the ideal that the food romantics trot out on almost every occasion.

No doubt these folks are also Rousseau-romantics who think the Indians and the aborigines lived pristine lives without war and "at one with nature." Never mind the evidence to the contrary!

As for dogs, if they are not overfed, and are regularly exercised, they are probably fine with any store-bought food or carefully-selected set of table scraps.

Dried chicken mixed with rendered chicken fat is probably no worse than any other kinds of meat protein. Never mind that asian jungle fowl is not a natural diet for any canid -- it will do just as well as beef, lamb, deer, fish, horse, kangaroo or beaver.

As for millet or barley or pumpkin or potatoes, they are probably no worse (and no better) than corn, soy, rice or wheat.

If spending more on exotic-recipe dog foods makes you feel better about your dog and yourself, go ahead and do it. It will probably do the dog no harm.

That cannot be said if you feed your dog too much, however.

Remember it's generally not food quality that kills a dog, it's food quantity.

Too much food and too little excercise kills more dogs -- and more humans -- than anything else in this country.

And that's not about the FDA or the dog food companies; that's about us. 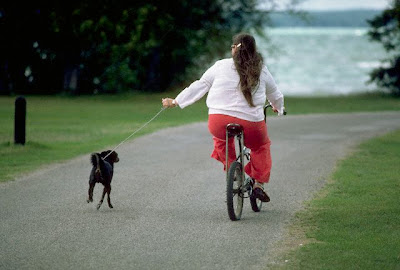 Excerpts from the Abstract

Wolves in YNP feed primarily on elk, despite the presence of other ungulate species.

Wolves select elk based on their vulnerability as a result of age, sex, and season and therefore kill primarily calves, old cows, and bulls that have been weakened by winter. Summer scat analysis reveals an increased variety in diet compared with observed winter diets, including other ungulate species, rodents, and vegetation. Wolves in YNP hunt in packs and, upon a successful kill, share in the evisceration and consumption of highly nutritious organs first, followed by major muscle tissue, and eventually bone and hide. Wolves are adapted to a feast-or-famine foraging pattern, and YNP packs typically kill and consume an elk every 2–3 d. However, wolves in YNP have gone without fresh meat for several weeks by scavenging off old carcasses that consist mostly of bone and hide.

also
rodents
vegetation
carcasses which are mostly bone and hide

These include many things that pet food review "experts" say should be avoided:
vegetation (i.e. grains)
organs (by product)
bone and hide (by product)
carcasses mostly bone and hide (unnamed meat by product)
weak and infirmed animals (animals that would go to the rendering plant)

It would be very wasteful (in my opinion) to discard everything but the meat of slaughtered animals. Since we can use the by-products in dog food, it makes sense to do that. The dogs don't care.

An elk every 2-3 days...wow! Another reason why even singular wolves are just not sustainable over here. Hopefully will be in the far away future.

No facts here other than my 2 dogs: fed raw sheep at a few occasions some years ago (all byproducts though, not "human grade") -ended up with a huge parasite infestation that was surprisingly hard to get rid of even months after the last raw meal. I believe it did quite a bit of damage to my first dog -especially since it took us so long to figure this out and get it diagnosed in order to get the prescription for a single dose of dewormer. By the time I searched out of country online sources for dewormer it might have been a little too late. We'll never know.
Besides, raw feeding allways worries me: what if the freezer dies? What if the electricity goes? Kibble is just so much more safe, wont get bad, easy to store and keep in stock, convenient to transport in the car/on the bike and out for hikes (lightweight and not leaking)...

Except for meat trims of my own lunch there will be no more raw for my dogs.