Terrier Training That Works in the Field 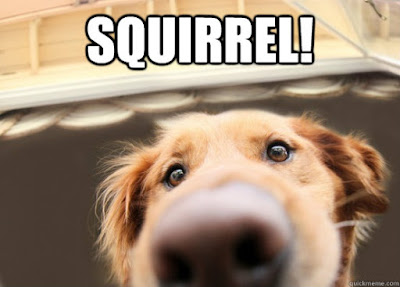 I've gotten a few inquiries about my post that referenced Karen Pryor.

Does she actually use an Invisible Fence on her own dogs?

She does.  As she notes in Don't Shoot the Dog:

"The same principle is at work in the Invisible Fence systems for keeping a dog on your property. A radio wire is strung around the area in which you want to confine the dog. The dog wears a collar with a receiver in it. If the dog gets too near the line, the collar shocks it. However, a few feet before that point, the collar gives a warning buzz. The warning buzzer is a discriminative stimulus for "Don't go any further." If the setup is properly installed, a trained dog can be effectively confined and will never receive an actual shock. I used such a fence when my terrier and I lived in a house in the woods. An actual fence would have been a perpetual invitation to try to dig under it or escape through an open gate; the conditioned warning signal and the Invisible Fence were far more secure."


And what about my note that she could not train her border terrier not to chase squirrels?  That can be found on her own web site:

"Going from that collie to terriers in the woods is just a shaping staircase; if you want to do it, it can be done, but it involves a lot of steps. For me, that's too much like work. My practical solution is a mix of training and management. The backyard is fenced, and there the dogs can bark and chase squirrels all they want. Outside the front door, on the sidewalk, we enjoy a shaped behavior of stalking squirrels, with an occasional brief 'chase' reinforcer. In the woods, my poodle, whose lust for squirrels is mitigated by his general timidity, can be off-leash, because he was quite easily shaped to come when called, even from squirrels. My 17-year-old border terrier, however, stays on-leash in the woods. From her standpoint, it's a lot better than no woods at all."


Bottom line: Reliance on clicker training alone is a reliance on a system that too often fails to meet real-world needs in the real world.

Have you noticed that Skinner, the Brelands, and Karen Pryor mostly focus on training animals in cages, tanks, and boxes?

This is where they learned animal training -- in an environment without distractions, where nothing comes in or out.

And did you notice that their fame was not gained training dogs?

Here's a hint: They all tried to train dogs outside of cages, boxes, tanks, and closed rooms.  That's where the money is.  But guess what?  They were not very good at it.

One reason they were not good at it, is that their core experience was training non-predators (chickens and pigeons, pigs and raccoons), or animals with relatively weak prey drives.  When given line-bred predators like a working terrier or a Malinois, rewards-only theory fell apart pretty quickly. Sure, you could get a very hungry animal to perform behaviors with food. Always. But could you get them to reliably perform behaviors in an open forest and field situation when they were not very hungry, and any and every kind of distraction could pop up at every turn?

And what about stopping self-rewarding behaviors? Could you get a terrier to not chase a squirrel?

Karen Pryor couldn't, and she had 17 years to try.

Please do not misunderstand the point being made here. Food reward and marker (clicker) training is core stuff.  Rewards-based marker or clicker training is a big part of getting a dog to understand what he is supposed to do -- exactly what you are asking at that moment.  But so too is the use of aversive markers to show what you don't want to be done, at that moment, whether that is a leash pop (hard to do from 12 feet), or a thrown chain or heavy rope (hard to do from 30 feet), which is why a modern e-collar is such a game changer (a panoply of reliable and instant signals sent from as far as a mile away).

For those who wonder what the difference is between an Invisible Fence, a modern e-collar, and an old-fashioned "buster" caller, see this post: 10 Quick Notes for the E-Collar Curious.

While I do agree with you I am getting a feeling of deja vu. These are facts Patrick, and nobody cares about them anymore. I am also starting to wonder how many of the 'no aversives' lot actually owns a dog. Some probably do, and like millions of people who cannot handle their dog but are in deep denial, aversives sounds 'you are a failure as a dog owner'. I presume they have 'furbabies' so any failure is even more of an issue. The reasonable thing would be to separate the gullible, the morons and the feeble minded and put them on an icefloat, where they cannot do harm. Sadly we cannot, so how do we redeem them? Talking dogs and clickers and stuff won't do. How do we get in their thick vapid heads is no trivial matter, but pointing out the facts is clearly not working.

I am a firm believer that if you set your standards low enough, everything is a success. In fact, some people think I live my entire life under that motto!


In all seriousness, you are 100 percent right.

People look at the world through lenses they grind for themselves. They want to look in the mirror and see themselves as compassionate and "nice to animals" and never mind if they have cruelly set their dog up for a lifetime of confusion, instability, and endless disobedience.

I may write more on that. I have astounding examples, as most people with dogs do.

The clicker is merely an instument which tells the dog it has done something right and that it will get a reward. Timing is of the essence.
If your terrier is on a trail or in a den or digging to something, a beef tartar on a silver tray will not entice them. At least that has been my experience.The dog will come back or out...eventually. Patience!

Couldn't agree more. Here living in oh-so-kind Switzerland e-collars and anything probably unpleasant are banned, most dogs walk on drag leash and are wearing stupid harnesses ... and when not on leash, well, they usually do not really obey anything, (just telling that the DOG is able to tell the difference between leash/no-leash perfectly well)... yet, we have Schutzhund/Mondioring/Obedience etc. people and I know first hand that they liberally use e-collars. Albeit illegally -but no one knows. They work behind closed doors. I am certain that their deprived dogs would never be controllable in the competition field, with people and dogs everywhere, if not for the heavy handed use of e-collars.(along with other aversives, of course) Especially not in international levels where your dog must be even more focused to get even close to the ranks. The rest of the world uses e-collars and those who know what they want use them here too .... hmm, should I mention that police-dog-trainers have an exception to this law? And that most of the top service dogs are finished outside of this country... guess why.