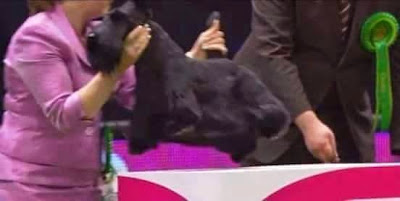 It seems some folks are all a-twitter because some of the terriers at Crufts were manhandled like tea pots, as seen in the picture, above.

Much ado about nothing.

That said, a terrier is not a Labrador Retriever or even a Whippet.

Terriers are light dogs that are supposed to have tough tails which are, in fact, part of their working form.

I routinely tail my own dogs out of holes, and I have even tailed them out of a hole with their teeth firmly sunk into the quarry on the other end!

Yes, the handling you see above is aesthetically bad, and unnecessary in this circumstance, but it does no harm to the dog. It is not a matter of ethics or disrespect, even in a "pretender" breed like the Scottie.

Does it seem to present the dogs as a commodity -- as a tea pot?

That is the objection of the folks who run Crufts, and why they have asked terrier people to handle the dogs differently.

But the folks who run Crufts are focused on aesthetics, and never mind the ethics of breeding dogs in a closed registry, of awarding championships to dogs that do not work, have bad temperaments, and which could not pass a health check. Changing the rules there looks too much like work!  And so, in lieu of actually tackling the real ethical issues, the have turned to aesthetics.  It's a bit like painting over rotten wood -- sure to fool the know-nothings and a dirt-cheap "fix" that fixes nothing.

If folks are focusing on how terriers are handled, then they are missing the forest for the trees in the world of show ring dogs.

The real ethical issue with Scotties is that they have a 45% cancer rate.

Let's talk about that -- and the fact that "well bred" show Scotties have worse health outcomes than those cranked out by backyard breeders and puppy mills.

I love man-handling terriers- they're made for it! I have reverse snobbery- when I'm at the park or walking my two maniac JRTs and I see a purebred 20 pound purebred terrier I snicker inside- I think "real thing here with me on the leashes- fake fru-fru pretty poseur over there"!

I think the real objectification of these dogs comes not in their handling, but in their coat. Just look at those Scotties: curtain-like fringes of hair on the sides that make it look like a hovercraft when it walks, and long fringes for a mustache, beard, and eyebrows. That is not what a terrier is supposed to look like. No terrier dressed like that is going down any holes, or doing combat with any badgers or foxes. It's not even going to have an easy time running. No, these are canine Barbie dolls; living beings dressed up like objects, and that's what bothers me.

The same could be said for any number of other breeds. Rough collies, with their long locks and supermodel snout (and teeny eyes) don't look much like their Scotch collie ancestors anymore. Show-bred Afghans have long coats, too, even though their landrace brethren in Afghanistan right now are a lot more rugged-looking and functional.

And the list goes on. These dogs are not being beaten or starved, but they are obviously being objectified by people who'd rather primp and fuss over them than just let dogs be dogs.

They may not be getting beaten or starved, (however, there have been any number of "show breeders" ratted out by concerned neighbors, whose dogs were found to be in deplorable condition/surroundings - sometimes with dead dogs in the runs)

In any case, breeding dogs that can't walk, whether form congenital defects - defects that were selected for - or too much hair is cruelty, plain and simple.