A Scottish terrier named Knopa was crowned the winner of Crufts' best in show award.

This is a pretender breed -- a terrier so poorly constructed -- with a massive chest and too short a back -- that it can never get down a fox hole.


A terrier that cannot get down a fox hole?

All that and more was at Crufts. Such is the state of Kennel Club dogs.

As a breed, the Scottie is a health care basket case.


As Great Scots Magazine notes on its blog:

What is killing us and our dogs are ‘typy’ good looks that hide recessive genes and late-onset diseases. However, the contamination of our Scottish Terrier gene pool can only worsen until we grasp this elemental truth of population genetics: kinship-increasing breeding practices, sustained over time, in a small breed population, lead inexorably to what population geneticists call “inbreeding depression.” Classic signs of inbreeding depression abound in Scottish Terriers today: (1) shorter lifespans (2) weakened immunology (3) smaller litters (4) increased whelping problems (5) spread of genetic diseases. Take one example: Scottie longevity. In 1995 the STCA did a small health survey limited to their registered breeders and pegged the average Scottie lifespan at 11.2 years. In 2005, a decade later, Great Scots Magazine sponsored a comprehensive Scottie health survey, encompassing over 1600 case studies comprising both show bred and pet Scottish Terriers, and found the average lifespan is 10.15 years. Assuming the STCA numbers from 1995 were accurate (those are the only longevity numbers the national club ever produced in their 95-year history to that date)—assuming their numbers are accurate, it shows our breed’s lifespan dropped by 10% in a single decade! That’s equivalent to humans losing perhaps eight years or more off our life-expectancy.

The tragedy here is simply this: a purebreed system lacking the perspective of biological conservation and driven rigidly by the aesthetics of ‘type’ is a system obsessed with a small portion of the genetic picture and functionally blind to larger gene pool dynamics. Despite manifest signs of a troubled gene pool, we persist in our bargain with the devil for ‘typy’ good looks blind to the fact that handsome, ‘typy’ Scotties that have high coefficients of inbreeding can only deepen our inbreeding depression.

Worse still, our kinship-raising/diversity-reducing breeding practices now are normalized and ensconced as responsible practice setting in motion the irony of breed guardians who believe they are saving the gene pool by holding for rigid showring ‘type’ when in fact they are adding to the ravages of depleted genetic diversity in our best dogs.

The Scottie gene pool, it turns out, is poisoned most by our own contaminated values, traditions, and rituals and our proud breed has most to lose at the hands of its staunchest friends. The mind-set and the ‘typy’-motivated line-breeding traditions which have brought our dogs to this predicament will continue to justify patch work band-aid fixes until the stark reality of our dogs’ jeopardy is driven home to the public. Until it informs us and frightens us and angers us it won’t motivate us to change the way we breed and buy Scottish Terriers.


Read the whole thing here. Subscribe to the magazine here.

Of course the Scottish terrier that won, was not bred by the owner, nor was she even walked around the ring by the owner -- a professional "handler" was paid to do that.

And of course, there was no mention of work.

Dig on the dog? You must be kidding. Neither dog nor handler were in any shape to do that!

Just to add a final spritz to the clown car of ego, disease and deformity that is Cruft, Knopa's brief moment in the limelight was interrupted by a protester from PeTA carrying a small sign that read "Mutts Against Crufts". 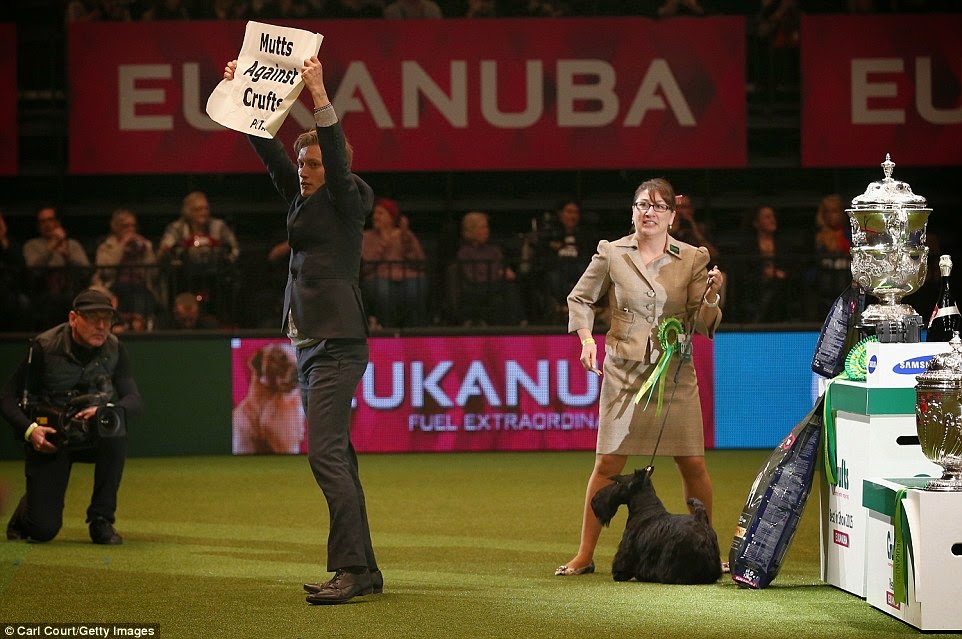 And why not have PeTA at this circus? They too are all about ego, and have nothing to do with dogs.

In fact, why not remove the dog from the picture entirely and have professional dog handler Rebecca Cross and PeTA President Ingrid Newkirk battle to the death?

I would pay cash money to see that, and I bet you would too!

The first link in this post does not work. When I follow it, it takes me to a blank page.

Purebred dogs are like bad art- or modern art for that matter- the people involved chase an aesthetic which has to do with lines and angles and abstract shapes. Bad bad art. And in real life the real beauty is in watching real dogs working- there is a spectacular video of Kazakh hounds (they look like scruffy Afghan hounds) chasing and killing a wolf or real lurchers and terriers working or best a real sheepdog or cattle dog doing its thing.