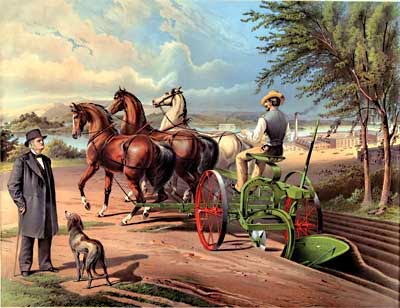 Plowing with mules and horses is so hard, expensive, and inefficient that when the first motorized vehicles came along. America's farmers leaped at the chance to boost production and ease their work load. 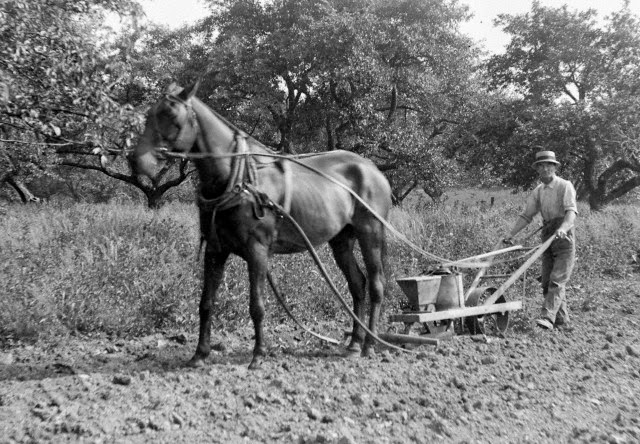 Even the smallest tractor from the 1890s outperformed a mule, and unlike a mule, tractors got bigger and better every year, with new attachments made to drive threshers, log-splitters, saws, and conveyor belts.  Electric light could even be added! 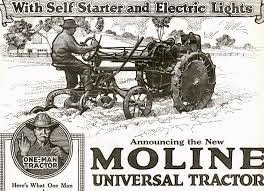 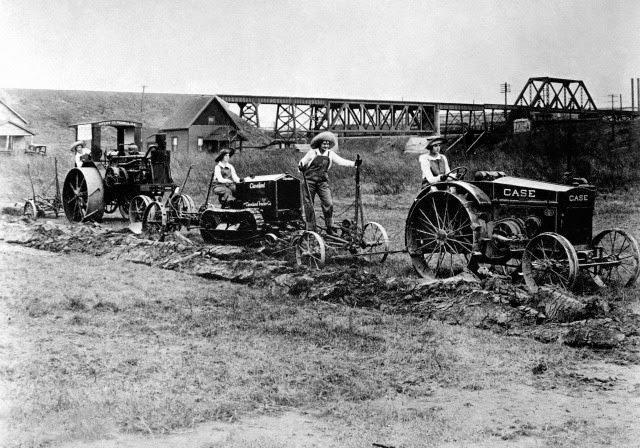 With an explosion of farm tractors and trucks in the 1930s, 40s, and 50s, a glut of old farm horses and mules appeared on the market.  The horse and the mule, once an essential means of production, was now a nearly-useless vestige of another area consuming too much pasture, money, and time. 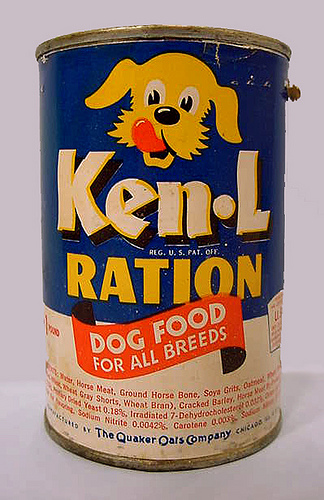 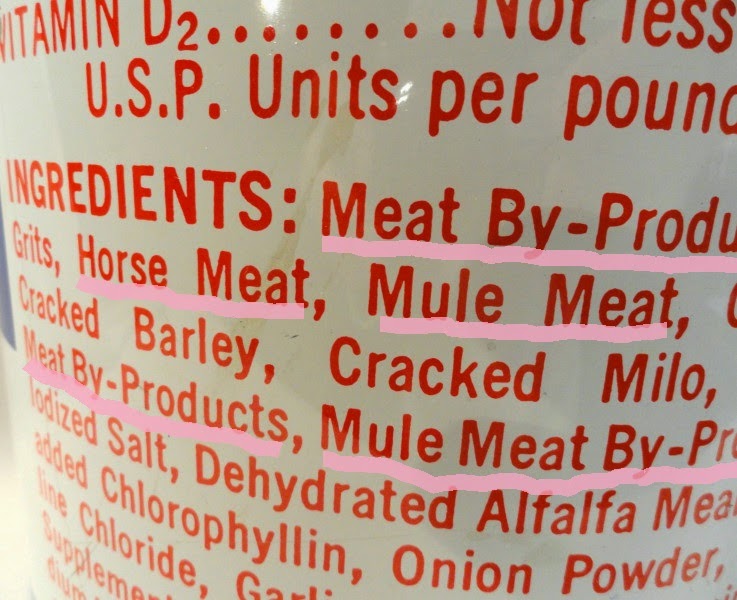 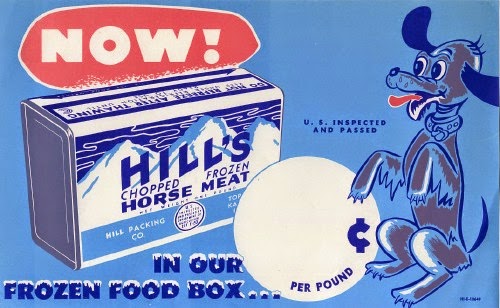 Canned dog food was heavily promoted in newspapers and magazines, and the television sets now cropping up in upper-middle class living rooms.

Horse and mule meat was touted as a pure and obviously good food or dogs -- real meat for real dogs.  If people were now eating everything out of cans, surely dogs should too?

Meanwhile, tractors got bigger and too did American farms.

Young adults who had left for war and war production factories never returned to the farm. What might have been a critical shortage of farm labor was in-filled with mechanical labor.  Where it used to take one man to work 20 acres, it now took only one man to work 200 acres or more. 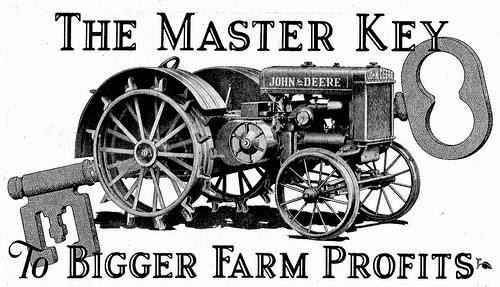 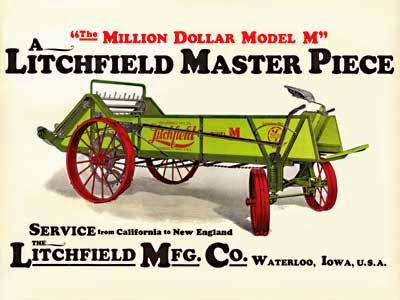 Tractors not only spurred an increase in the size of American farms, it also increased our agricultural muscle and made the U.S. an essential trade partner the world over. When Russian wheat harvests failed, America stepped in. When Europe went to war, it was the American farmer on his American tractor that not only fed American troops, but much of the populations of Britain and France. 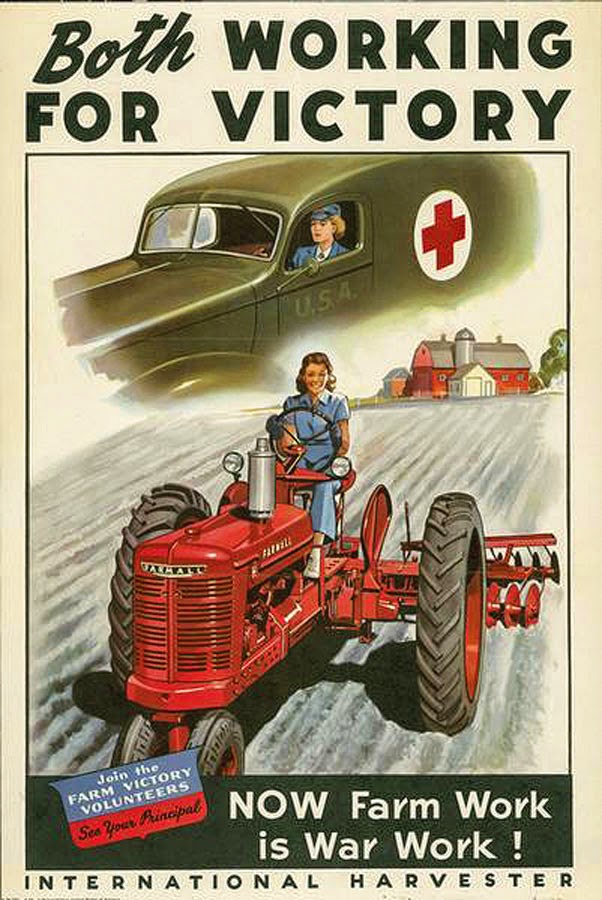 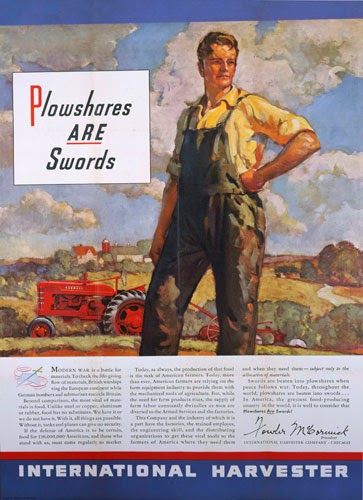 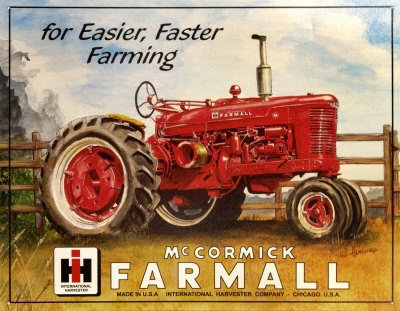 Today, the transition from mule to machine is complete and there are no longer vast herds of redundant horses and mules waiting to be sold for dog food. Sure, there are scores of thousands of wild horses out west that the U.S. government does not know what to do with and which are degrading public lands, but their numbers are not enough to drive a return to canned dog food, even if slaughtering those horses for that purpose were allowed.

Instead, the protein and fat needs of America's dogs are mostly met with grains, vegetables, chicken, and a wide variety of other scrap meat trimmings left over from beef, hog, and other human food production.

And for a bit of a cross-over story comes this >>

"Global retail giant Wal-Mart has recalled a donkey meat product from some Chinese stores after tests found it contained the DNA of other animals including fox.

"The world's largest retailer will reimburse customers who bought the 'Five Spice Donkey Meat' 50 yuan (around £5), a spokeswoman for the U.S. company said.

"The company said it would independently DNA test all of its 'high-risk' meats in China, a procedure which is not required by retailers under Chinese food laws, the spokeswoman said."

I have wondered over the years how it came to be that horse/mule fell off the acceptable menu for dogs. Most cite a ban dating back to the 70s but little info as to why or who the big players were in the decision.

If you wonder why Chinese fox some of the most horrific videos on the internet are of Chinese fox farm methods. Literally skinned alive and put in large piles of writhing skinless carcasses. I guess even these aren't wasted...

Many moons ago, I had a chance to try my hand at plowing a field for corn with a single blade and horse, while staying with friends in their village in Michoacan, Mexico. I will testify that it's hard to plow a straight line! I was the source of some amusement as I weaved my way across the field and back. For their sake, I hope they've graduated to using a tractor, but given the state of things down there, I doubt it.

I could not refrain from commenting. Exceptionally well written! Funny

Dear Patrick,
The switch from horse/mule agriculture happened for many reasons - the promise of easier living and the fact of credit (the tractor dealer offered it, the horse dealer took cash), technophilia and PR from landgrant colleges. Horses one could breed and feed on the farm, who required rest periods and thus for their partners were replaced by non-local machines using non local fuel.

Some effects were a sharp reduction in family farms, increased production,erosion.monoculture and mistreatment of chickens, turkeys and hogs.

The Amish are a stable, happy, healthy, horsedrawn people.

For the most part, the Amish bought their land a long time ago, so their debt is low or non-existent, which means they can afford to put pasture and corn into production for horses and stock that never leave the farm.

The Amish also have large families, which helps with labor.

Lots of things drove the adoption of mechanization on the farm, from slave liberation (which propelled the quick acceptance of the cotton gin) to immigration restrictions, and from the rise of the Dust Bowl (party created by the collapse of the Russian wheat crop due to the Russian revolution a world away) to the subsequent collpase of US birth rates, to the need for increased agricultural production to help Europe in WWII.

Social Security meant rural America no longer had to have large families to take care of aged parents (the Amish are exempt from paying Social Security), and because families now had a small but steady income for aged parents, these families could now afford to send more kids to college and trade schools (the GI Bill helped a huge amount as well).

Urbanization was so rapid from 1900-1920 that Census reapportionment did not occur in 1921 as the rural districts knew they would lose political power.

Dear Patrick,
The Amish are expanding, buying new land for their sons. If you drive through Holmes County Ohio, you'll notice that the rural shacks attended by dead vehicles on blocks have electric lines to them. The prosperous farms don't. Donald

Yes, just looked it up. Apparently after 1990, the Amish have broken out of their old communities to buy land in the west (Ohio is big but even farther west in some instances). Just did a post on all of it that will load tomorrow morning. Amazing fertility rate!