Faking It With the Turtleman 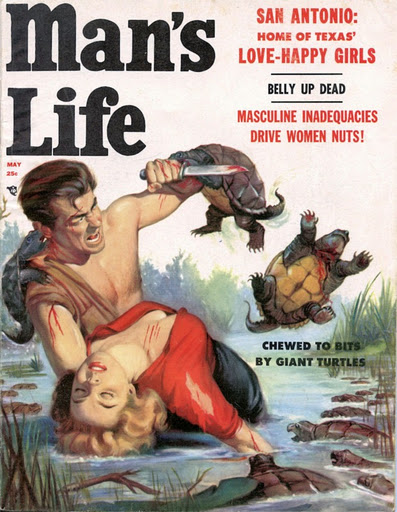 Over on FlyRod+Reel Online, Chris Palmer notes that a recent David Attenborough special (Frozen Planet) filmed polar bears in a zoo while leading viewers to believe the animals were filmed in the Arctic wilderness.

This is not the first time nature films have faked nature.  As I noted in a previous post, there is no evidence that Honey Badgers have ever been guided to a hive by Honey Guide Birds -- the film showing that is entirely faked.

And what about all those photos and film you see of wild mountain lions?  They are almost certainly shot in large filmed enclosures with entirely tame animals.

Remember all that film from Marty Stouffer's Wild America, and Marlin Perkins' Wild Kingdom, to say nothing of Walt Disney?  Yes, a great deal of that footage was faked too.

Modern examples of fakery and outright lies include the ridiculous "Bear" Grylls television show which is replete with faked scenes, as well as the even more ridiculous "wolfman" show featuring Shaun Ellis.

Also faked are many of the hunting shows we see on TV today, where farm-raised animals are baited for weeks at specific locations before a film crew and a hunter fly in to shoot a few bullets and a little film on a very tight schedule.

You want to know how difficult it is to show a real hunt for real wild animals in real wilderness?   My suggestion is to read "The Luck of the Draw" by Lee Wulff in which he recounts the making of a bow hunting film he participated in, and which involving spotter airplanes and several weeks in the field in order to get a few seconds worth of usable film (after which the stalk-up to the animal was then faked recreated).

[I]t's hard for a guide to realize how accurately placed both archer and cameraman must be and how swift and sure each must perform in filming a kill. The cameraman must always have the sun at his back, regardless of wind direction. He must be far enough away to show both hunter and his game in his lens, yet close enough for the images to be sharp and clear. He must move quietly, start his camera before the action starts, and not stop the camera before the action is complete. However great the difficulties may be for a solo hunter, for a camera-hunter team they're increased a hundredfold.

Right.  And that's why so many of these television hunting shows are so often centered around canned or "high fence" hunts with semi-wild animals drawn to bait stations by "outfitters."

I bring all this up because fakery continues apace, even with the simplest of wildlife shots using the smallest of small game -- rats.

I was forwarded a link to this clip of the "Turtleman" who is now featured on the "Call of the Wildman" show being shown on the Discovery network. I have no doubt that Ernie Brown, Jr. (aka the Turtleman) has excellent wildlife hand-grabbing skills, but television wants drama and it seems that fakery is more than OK in the name of entertainment.


Those who know much about rats and home construction will spot the fakery pretty quickly.

For starters, look at the ceiling board that is about to be opened up here -- it's been patched. That's a little odd, but only a caution. What is not a caution is that once a hole is bashed into the ceiling, rats instantly come piling out of the hole as if they were being fed down a hopper placed directly above -- which do doubt they were.

You see, floor and ceiling joists are built on 16" or 24" centers with long parallel stretches running 10-30 feet or more, depending on the size of the floor. Punch a hole the size of your fist in a drywall ceiling, as shown here, and any rats running between the joists will simply stand back to avoid the commotion, or else bolt from the area altogether using the other hole that they used to get into the space to begin with.

This is not to say the rats will not swarm out of a ground hole if smoked. They will, and I have been there manning the smoker when they did it, but even here the numbers that explode from an ancient rat warren are not as large a number as seen here. This is ridiculous, and speaks to fakery and staging from a producer who did not know too much about rats.

Want another clue? Look at those rats going to the food. Yes, LOOK at those rats -- they are out in broad daylight, and they are not in the least bit nervous. Wild rats simply do not come out in broad daylight like this unless they are dazed from warfarin poison, or are running from one location to another. When they do come out, they do not enter the middle of an open floor to feed with humans moving around just a few feet away -- they run along the edges of walls.

Another clue to the fakery is that this basement does not seem to have much detritus or food lying around. Rats need food and water, and for a rat colony of this size to have developed over time, they would need access to a lot of very steady food -- bags of spilled grain or a full-scale garbage dump. Unless the home-owner here is a real hoarder with old pizza boxes strewn all over (and the cleanliness of this basement suggests they are not), then this bit of drama is staged from top to bottom.
.
.

Email ThisBlogThis!Share to TwitterShare to FacebookShare to Pinterest
Labels: rats

Rube the Rube Goldberg would have done better with a brace of terriers.
('Specially since they were nice clean, tame rats.)
Who watches this stuff anyway?

Obviously, the truth cannot be told enough! Despite having plenty of "rat experience" at our old farm (albeit pushing 30 years ago now), I bought into the cascade of rats raining down upon "The Turtleman". I've also read most of your blog entries about faked wildlife programs, etc., and yet my reaction was not "What a fake!", but rather, "A couple of good dogs would have solved that problem in a nanosecond." But, that would have shown the vermin being killed and not merely "bagged" (what happened to the rats after that?), and Animal Planet probably wants us to laugh at hillbillies and not see what a dog might do to a rat. So, "Ewwwwww....", and faked human comedy trumps truth again. Thanks for the reminder!

I want to know more about my hometown's (San Antonio) "love happy girls!" I hope they're not faking that.