A Brief History of Terriers: Part 2 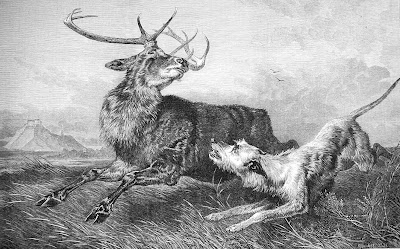 The origins of the first terrier are shrouded in mystery, but probably originate with the Romans who brought rabbits to Great Britain around the year 1000. Excavations near Hadrian’s wall have uncovered two types of dogs, one resembling a greyhound, and the other with a long and low body similar to that of a dachshund.

The first detailed record of earth work, as we know it today, was recounted in 1560 by a Frenchman by the name of Count Jacques du Fouilloux. Fouilloux wrote a fairly detailed book entitled La Vernarie (The Art of Hunting), in which he describes hunting fox and badger with tools remarkably similar to those used by terriermen today.

Fouilloux describes the dogs as being "bassets," and indeed the illustrations do show dogs that look like small long-bodied hounds — possible antecedents to today’s dachshund which, in German, means "badger dog".

George Turberville, an Englishman, translated Fouilloux’s book and put it out as his own work, replacing "basset" with the word "terrier," even though Fouilloux’s pictures (also copied) bore not the slightest resemblance to the terriers we know today.

In fact, the terriers of Turberville’s time may have looked more like dachshunds than our modern dogs. There is no question that the oldest terrier breed in the U.K. — the Dandie Dinmont — clearly resembles a dachshund in appearance.

At this point mounted hunts for deer and fox did not yet exist in Britain. Instead Medieval Britons engaged in driven hunts inside deer parks edged by massive earthwork moats and mounds topped by wooden fences. Deer were driven by dogs into funnel-shaped wattle fences constructed within the parks, and deer (and the occasional fox or feral dog) were then shot by archers perched on tree platforms as they exited the funnel narrows.

Fourteenth Century England had over 3,000 deer parks occupying more than 650,000 acres of land, but these deer parks fell into disrepair during the late Medieval times as the feudal system collapsed under the mortality and economic disruption caused by the Black Plague.

Formal deer parks were eventually replaced by a new type of hunting imported from France — coursing with horse and hound — and some of the vernacular of today’s mounted hunts betray the French origins of the sport. "Tally Ho," for example, derives from the French "Il est haute" ("it is up there").

Coursing was initially limited to stag, but by the beginning of the 1600s, fox hunting had begun.

The first formal mounted fox hunt in the U.K. was probably the Bilsdale in the Yorkshire Dales, started in the early 1600s. Over the course of the next 150 years fox hunting slowly gained in popularity, but stag hunting still dominated right through to the start of the 19th Century.