You Be the Judge in this Dog Story 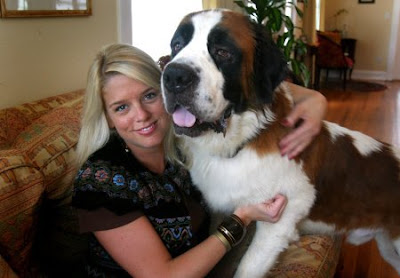 "Crazy with hot sauce, and a dog story too."

That was the subject line in the email I got, and when I clicked on the link, I got  a little video view of Pam Bondi, the new Attorney General of Florida.  I assume she is the hot sauce?

So what's the dog story? That was a little farther down in the Wikipedia article where we learn:


For the record, the St. Bernard Parish family that owned this dog did not want to leave it.  When they themselves were rescued by boat, the human rescuers threw the dog out of the boat and handcuffed the owners for trying to dive back in and get it.  Last they saw the dog, it was swimming after the boat.

The owners, undeterred, sent a cousin out to leave food and water for the dogs, which he did.  On September 18th, the dogs were picked up by pet rescuers and taken to a Humane Society shelter set up for Katrina dogs.  The dog was then transferred from Louisiana to another Humane Society shelter in Pinellas County, Florida where, despite clear records indicating that the dog was owned by a responsible owner, it was put up for adoption.  Bondi adopted the dog on October 15th.

In the interim, of course, the owners were trying to find their dog.  They eventually tracked it over several states and located it, but Bondi fought returning the dog for 16 months, first arguing that it was a case of canine mistaken identity, and then arguing that she would be a better owner for the dog.

Only after losing in court, did Bondi relinquish the dog.  Now she's the new Attorney General of Florida.

Just because you're a lawyer, it does not make you smart.

I nearly had a stroke watching the "Mine" documentary. I couldn't believe the utter GALL those people had to not give those dogs back. Listening to their arguments as to why the New Orleans residents weren't good enough to own dogs was just the cherry on top.

That plus all the rescues spay/neutering the dogs WITHOUT owners consent, claiming the dogs were abandoned, and whatnot...ohhhhh if I were ever in that situation, I would blow a gasket.

As frustrated as I was that JJ and Precious didn't get home, I was at least happy to see Bandit, Murphy and the Jack Russell reunited with their owners.

I adopted my dog 15 months ago and if someone showed up claiming to be the former owner - even with a legitimate reason - I'm not so sure I would just give up my dog. It would be a very difficult decision.

Typical Florida story. Reading any local paper in Florida will make you want to set your hair on fire. I've spent far more time in Pinellas County than I'd ever have willingly. At one time in its recent history Pinellas County had the distinction of having the worst performing public school system in the U.S. I'm not in the least surprised it would be a hot bed for the "Tea Party", as water seeks its own level.