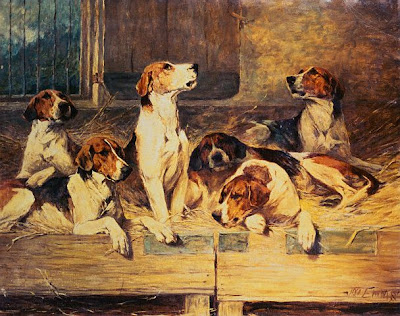 I went to a series of lectures at the National Sporting Library and got a chance to say thanks to Harriet Ritvo for writing her great books and also to meet and talk a bit to James Serpell who was on the same Nightline segment as I was, and who was also quoted in the HSUS cover story on pedigree dog health.

A odd lecture was given by a woman who started off saying that she could not bear to see her own dogs kill anything, so she engaged her own sighthounds in lure coursing. Now, to be clear, I fully realize that coursing, shooting, digging, and hunting are not everyone's cup of tea, and I never tell folks they have to hunt in order to have happy, health dogs. But really, who starts a lecture off at the National Sporting Library, whose reason for existence is fox hounds, by telling the audience they recoil at hunting? A bit odd.  The lecture fell a bit father down the stairs when the presenter did not seem to know the difference between herding and livestock-guarding breeds, and slipped a bit farther when she suggested an ancient Greek carving showing an adult dog play-bowing before a puppy was two dog fightings. The basement grade was reached when she put up a list of sighthounds that included the Basenji (sighthounds in the Congo forest?), the Rhodesian Ridgeback (a pariah dog crossed with a Fox Hound), and the Inca Orchid Dog (a dog created as bed warmer). A small suggestion for the National Sporting Library: Maybe a lecture on sighthounds should be done by someone who actually hunts their dogs, and not by an AKC theorist?

Ah well, the other lectures were great!

Serpell detailed the origin of dogs (he noted that all the tales told were little more than "Just So" stories), and he stuck to science and common sense which was a breath of fresh air.

Emma Griffin gave a pretty good lecture on "Hunting With Hounds and the Pursuit of Status in Early Modern England." I enjoyed this lecture, but Ms. Griffin's research seems to have largely focused on the Medieval period, and to stop at the start of the early Victorian era. She never mentioned the Enclosure Movement at all, and seems to think trapping and poisoning fox is the same as "hunting."  Even when I asked a gentle question about vulpicide, she failed to return the volley in any meaningful way, continuing to confuse trapping and poisoning with hunting, and signaling that she did not fully understand the scope of the Enclosure Movement or its role in shaping hunting conflicts and the lands that were being hunted over in rural England.  For that part of the story, I have pasted up chapter one of American Working Terriers. Ms. Griffin's own book on the history of hunting in England is entitled Blood Sport: Hunting in Britain since 1066 .   I am waiting for that book to show up in the used market ($50 is a bit rich for me to shell out for a history book), but I cannot help noting that it carries an unnecessarily loaded title.  "Blood Sports" is the term universally used by the anti-hunting set.

Harriet Ritvo's lecture was quite good and she noted, in particular, the decline of the Bulldog from healthy and nimble animal to wheezing mutant under the fashionable tenure of the Kennel Club. I tossed out a question about the future of the Bulldog.   She had heard that the UK Kennel Club had changed its standards, but she had not yet assimilated the fact that those standards have only barely changed, and that they have not (yet) resulted in any meaningful change in either breeding or ribbon-giving at Kennel Club shows. As for the AKC's embrace of Bulldogs and their promotion to the #10 slot within the AKC, there was no mention at all.   No worries; you cannot present the entire history of the dog in 30 minutes, and her excellent lecture was supposed to be centered on the Victorian period, not current developments.  Full score here!

Only at the end of the day did I realize that the only lecturer who seemed to actually hunt with his or her dogs was Benjamin Hardaway (the last lecturer of the day), who detailed the various strains and types of American foxhounds, as well as his own foxhound breeding program, which started in the 1950s. This man is clearly a font of knowledge, and someone really should do an oral history of how the rise in the U.S. deer population plagued the sport of fox hunting in the southern states. Interesting stuff!

Special thanks to Sarah B. for driving me out to Middleburg, and a hat tip to the hard-hunting Teddy Moritz who I was delighted to see again.  Also a nod to perhaps the most interesting person I have met in the last six months -- Dr. Anita H. who is a black, female, horse-riding, civil-war-history-loving reenactor.   A fun lady!  I look forward to attending her lecture in D.C. on November 26th!
.
.

It's a pity that Coppinger gets most of the press on dog origins. I think that Serpell is more interesting, better schooled on the subject and a much nicer guy to boot.

Prof. Serpell is certainly a nice guy, and he sticks to a few simple and obvious points: 1) we have various types of DNA evidence, and so we do have some upper and lower bounds on speculation, and; 2) primitive people all over the world routinely take in wild animals as pets, and why not wolves (or coyotes and goden jackals too, I might add) since humans are STILL doing that?! Do we need to write a long "just so story to fill up the chapter??

Thanks for the review, Patrick. Such symposia are what I miss from the DC/N VA area.

Only someone who has never hunted or coursed with sighthounds would make the mistake of calling Basenjis, Ridgebacks and other pariah dogs sighthounds. They are NOT sighthounds, but unfortunately they have deluded themselves and everyone else into thinking they are sighthounds by virtue of the fact that they are allowed to lure course.

I wonder if the term "blood sport" has either changed, or means something else in some circles. As a horse person, "blood sport" has (to me) always meant hunting with fox hounds, shooting animals, etc. I mean, it's not sport as in basketball, it's hunting.

"Field Sports" is the prefered term of those who hunt, course, ferret, hawk, dig, or ride to hounds.

"Blood sport" is the term used by the antis to try to confound those who hunt with those who bear bait or engage in cockfighting or bull fighting.

I would really like to know - not having attended the symposium (It's a long way from Wales!) what the consensus was as to how long we as humans had been relying on dogs for our daily meat. I find it fascinating that all these anti-hunt people appear to believe that it is immoral to hunt with dogs when we have been doing just that - to the benefit of both species - for £x million years.
As to the term "blood sports" having possibly changed its meaning, that would be news to me. If you shopping to Wallmart for meat is that "Blood shopping"? I think not.

The DNA drift evidence suggests that wolves may have been domesticated as some form of proto-dog as long as 30,000 years ago, while the tomb evidence (proto-dogs burried with humans, shortened proto-wolf-dog skulls with dental crowding) suggests that 13,000 years ago we were living closely with proto-dogs of some sort. Some of the very broad dog types that exist today were around 4,000 years ago (sighthounds, heelers, guard dogs, lpa dogs), but most of the breeds that we know today were created after 1860, with fancy fake histories cocked up to suggest an ancient lineage.

Beside the point, I know, but a question:

I went to public school, which means that, like Shakespeare, I know a lot of ways to spell things:

One of those is probably right for what comes out of a hen!

It's a Baptismal Font, but it's a fountain that delivered water to you in grade school.

Bottom line: they both work and there's no "right" way. Ditto for a lot of words actually...

Someone, just recently, asked me if Ben Hardaway was still alive. I told them I was pretty sure he was, but thanks for confirming! Up until around 2002 he used to travel to NM to run his dogs in Dutch Salmon's Pack Hunt.. he brought a trailer full of horses and hounds.

But my fondest memory was that he bought *everyones* dinner at La Posta in Old Mesilla ;)