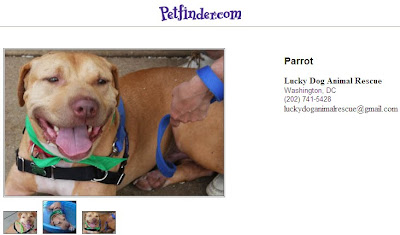 Right after it bites someone.

An example can be found just up the street from where I work, and it's as current as this morning's newspaper.

It seems two dogs attacked each other in the middle of a street fair.

The larger dog in question was thrown down a stairwell by local law enforcement and then shot. The owner of this dog told The Washington Post his dog was a Sharpei mix.

In fact, the dog is still listed on PetFinder as a Pit Bull-American Staffordshire Terrier mix.

And the owner clearly knew that.

Do I think this dog needed to be shot by the local police?

In my opinion, this officer should be fired for his actions, which includes drawing his service revolver in a crowded urban setting when no human life was actually at risk.

But do I think this dog deserved to be placed in better hands?

And do I think Pit Bull adoption should involve more owner education (and more screening) than seems to be going on at the Lucky Dog Rescue?

Which is not to say the Pit Bulls are evil.

It is to say, as Katherine Houpt, director of the Animal Behavior Clinic at Cornell has noted:

"Different breeds have genetic predispositions to certain kinds of behavior, though that can be influenced by how they are raised. The pit bull is an innately aggressive breed, often owned by someone who wants an aggressive dog, so they're going to encourage it."

Pit Bulls are not evil. But they are also not "just like every other dog."

And, like it or not, they are way over-subscribed when it comes to serious canine violence in this country and around much of the world.

Breed-blind Pit Bull enthusiasts routinely claim that newspapers label any dog that bites a human or another dog a Pit Bull, and I have no doubt that a certain amount of this actually happens. But I also suspect that a lot less of this happens than some folks would have the world believe.

So once again, I issue a standing challenge: Here's the list of fatal dog attacks in the U.S. for the last five years, by year and alleged breed or type.

I challenge anyone go through the data, year by year, for any two-year period and prove (with pictures or veterinary records) that Pit Bulls are actually mis-identified to the point that the bottom-line conclusion changes.

A final note about Rottweilers. You will see they show up a lot too.

In my opinion, this is the "exception that proves the rule." You see, Rottweilers are simply another type of butcher's dog, and their history is very similar to the true history of Pit Bulls, Boxers and other molosser breeds.

There is a code inside these types of dogs, as Katherine Houpt suggests, and though it is not an unmanageable code (most Pit Bulls end up as terrific pets), we are ill-advised to deny or ignore it.
.

I am reading "Evil Genes" by Barbara Oakley, about mutated genes in humans which cause anti-social behavior. Hot subject!

She says that a mutated gene that causes part of the brain to shrink during puberty also causes some type of schizophrenia.

The interesting part is that she quotes studies where genes are being matched up with PET scans of people's brains.

Since purebred dog breeds are so behaviorally different from each other, it would be very interesting to see PET scans of various breeds of dogs.

And she has an answer, learned from brain scans, which tells why people have trouble accepting the truth when they already believe something else.

And what do you think the police officer should have done? Offered the attacking dog a cookie?

Say, while you were at work, one of your family members was walking your little dog on a leash when a pit bull started killing it.

Should the police officer tell your fammily, "Hey they are just dogs, why shoot the pit bull to save your jack russel?" and then walk away?

Do you think that the police office should risk his limbs to try to save a pit bull, who clearly is not adoptable, and is likely going to be put down if the police office does nothing and the pit bull kills the smaller dog?

Time is very important when a pit bull attacks a small dog, in the time it takes for one head shake, the little dog can go from scared to dying.

What do you think the police officer should have done? And would that have saved both the pit bull AND the little dog who was on a leash beside it's owner?

Let me mention what I saw today. A woman with a big bully breed walking it with no leash and no collar.

If her dog attacked a person, she would have had nothing to pull her dog away with.

And 2 days ago, I saw another dog with owner, no leash, no collar - and guess what it was? A different woman and she was walking a different pit bull.

And another woman, whose pit bull growls at me, has had him loose, no leash, no collar.

But the people with the Chihuahuas, the Golden Retrievers, the GSPs, the Poodles, they all seem to kept their dogs on a leash.

Okay, in the attack near you, the guy maybe had the pit bull on a leash - but if he had control over his dog, then why was it able to/ allowed to attack the little dog, and why didn't he pry his dog off BEFORE THE POLICEMAN GOT THERE?

When toy poodles start killing pit bulls, then I will agree that breed doesn't matter, but until then, people who own pit bulls, Rottweilers, and other bully breeds need to respect what their dog is, and keep it safely on a leash.

Saw that in The Washington Post and figured you'd see it without my prompting. When I saw the photo all I could do was shake my head.

My family adopted a puppy from the local humane society when my son was a preschooler. She was listed by the shelter as a "hound mix". The shelter worker pointed out to my wife and son that the puppy was always sniffing aroung "thats the hound in her"

When I came home and took a look at the dog, it was perfectly clear that it was a pit bull. While she was a sweet puppy, I knew that if it ever bit a child at any of the inevitable elementary-school kid events, I could never forgive myself.

I took the puppy back to the shelter and the workers were furious. I said they had given my family misleading information about the dog. The amazing thing was their response. They said, "yes, but if we list her as a pit bull she will never be adopted"!

I have no idea how common this is, but it would only contribute to the problem if shelters foist these dogs on people who do expect to have that type of dog.

Pit Bulls are not evil. But they are also not "just like every other dog."

There is a code inside these types of dogs, as Katherine Houpt suggests, and though it is not an unmanageable code (most Pit Bulls end up as terrific pets), we are ill-advised to deny or ignore it.

Anyone who tells me that they LOVE pit bulls better be willing to admit that culling the aggressive ones is the ONLY ethical thing to do to fix their reputation.

And I hear one more idiot say, "All they need is love," I will shove my boot up his a$$. They need training, and structure, and they need to be leashed in public NOT because trained ones need the leash, but because they are targets when seen without them. Pitbull owners need to be more thick-skinned, and willing to "take one for the team."

Some of the most people-social, big-hearted dogs I have known in my many professional years are pits and pit mixes. It's a shame that people have really screwed them over.

Doubtful Guest, I tried that argument (culling aggressive dogs) on someone once, except it was regarding that German Shepherd that was shot 6 times and was sent to a sanctuary because he was too aggressive to adopt out.

The case of Oreo ("Oreo's Law" anyone?) was paraded in front of me and I was deemed as someone who didn't really seem to have the best interests of the dog in mind if I was willing to euthanize a dog that /might/ be fixable.

There are VERY few trainers out there who would take on a case with that kind of liability, time/financial investment, and still might end up with the dog for the rest of its life because no suitable home could be found. I like the hard cases, but I like the ones that have homes that are willing to help fix the problem, and there's a difference between that and finding an adoptive home that is willing to keep up the training necessary to prevent any future attacks.

I do wonder, though, if this is a sign of the times. But for the things like bad training techniques or no training, dogs as "furry children," the positive-psycholog movement, and the huge lack of responsibility that seems to have perpetuated the last few decades, would the pit bull breed (or any other "dangerous breed") be in any better of a situation if this was, say, another era?

About three weeks ago a 69 year old man in my county (calaveras, CA)was attacked and killed by two pitbulls that lived on his property with their owner who was his tenant. The dogs knew him but when they got out and ran together they went on a rampage. When the mans son went looking for the dad, he was attacked by the dogs and shot at them not knowing that his father was just yards away dead from the same dogs. The dogs were killed and the owner is in jail awaiting trial.