The Glory of British Dogs 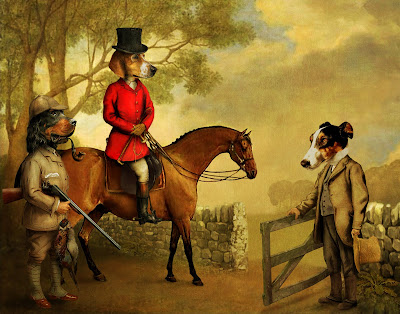 From the August issue of Dogs Today.

The Enclosure Movement made
British dogs, and its political legacy
may determine their future.

Have you ever wondered why so many dog breeds originated in the U.K., or came to prominence here?

Whether terriers or herding dogs, fox hounds or bird dogs, the United Kingdom has produced more than its fair share of great breeds.

The answer lies in the history of the land, and especially the advent of the Enclosure Movement.

The War on the Poor

The Enclosure Movement began in the 12th Century with the enclosure of royal lands for deer parks, but did not roar into prominence until the late 18th and early 19th centuries when much of rural England was swept clean of subsistence agriculture and human settlement.

It was during this period that most large woods were cut down and the land was repopulated with sheep hemmed in by stone walls and thick hedges.

To say the Enclosure Movement was a shock to the economic and social system of the U.K. does not do it justice. In England alone, some 6 million acres, or one-quarter of the cultivated acreage, was enclosed by direct act of Parliament. Another 4 to 7 million acres is estimated to have been enclosed privately by the wealthy. Every part of the United Kingdom was effected by this "rich man's land grab" which pushed millions of poor tenant farmers and squatters off the land into squalid cities and towns.


The Rise of the Mounted Hunts

The Enclosure Movement was a crushing misery for people, but it was a boon to dogs, especially fox hounds, collies, and terriers.

Prior to the Enclosure Movement, squatters and inholders living on common land made fox hunting with hounds difficult. Once people had been moved off the land and replaced with sheep and cattle, however, the number of free-ranging mounted hunts expanded rapidly.

It is not an accident that the first substantive mention of fox hunting and terrier work in English literature occurs in Sir Walter Scott's Guy Mannering, written in 1815 and set in the 1760s. This period of time coincides perfectly with the great expansion of the Enclosure Movement.


The Origin of Breeds

The Enclosure Movement did not just clear the land for sheep and mounted hunts. It also made possible the rapid improvement of farm stock.

In the 18th Century, livestock was still breeding at random, but beginning in the late 1700s, a farmer by the name of Robert Bakewell realized that by separating males from females — made easy by the rising number of enclosed fields — a farmer could select sires and, by so doing, rapidly improve the quality of his animals.

Bakewell’s experiments with sheep quickly spilled over into other farm stock, such as cattle, pigs and chickens, and eventually into the world of dogs.


The Boom and Bust of a Sheep Economy

The sheep economy, however, proved less stable than hoped. Busts in the wool business followed cheap imports of cotton and wool from Australia, America, and Europe.

In a collapsing wool economy, many marginal ventures found they needed other sources of income. One that presented itself was the stocking of pheasant, grouse and partridge for the new sport of bird shooting.

The blunderbuss, which had appeared on the scene in the middle of the late 18th Century, made way for the shotgun by 1850. The great age of Victorian shooting had now begun in earnest, with a new-found appreciation for retrievers, setters and pointers.

In 1859, the first formal dog show was held at Newcastle upon Tyne, sponsored by two shotgun makers, and featuring only Pointers and Setters. John Henry Walsh, the editor of The Field magazine, was one of the judges. He later went on to found the Kennel Club.

With the start of dog shows, the creation of breeds exploded.

In 1800, there were only 15 designated breeds of dogs, but by 1865 that number had grown to more than 50, and it exploded to triple digits soon after the Kennel Club was founded in 1873.

In the Kennel Club, broad types of dogs were no longer allowed. Setters, pointers, hounds, terriers, and collies had to be sorted, segmented, catalogued, and segregated.

Dog shows became social scenes, with middle class climbers purchasing "purebred" puppies to insinuate themselves up the social register. As one Victorian periodical noted, "nobody now who is anybody can afford to be followed about by a mongrel dog."

The rapid differentiation between show dogs and working dogs became more pronounced as time went on. Increasing numbers of people bought dogs, bred dogs, wrote standards, or changed them. Points were given for the set of a dog’s tail, colorful markings on coats, the color of the eye, and even a dog’s "expression."

By the turn of the 20th Century Kennel Club terriers were no longer expected to go to ground or even chase a rat. Most Kennel Club retrievers fetched nothing bigger than a ball, while owning a Kennel Club pointer or setter was more likely a fashion statement than the mark of a sportsman.

The world of dogs was changing, and not for the better!

Around 1900, the Kennel Club began to close breed registries, and inbreeding to the point of defect began in earnest.

By 1950, most Kennel Club breeds no longer worked, and rapidly rising rates of inherited defect were being observed.


Into the Modern Era

One would think that by now the pentimento of the Enclosure Movement would no longer be discernable in the world of dogs, but you would be wrong.

In September of 2002, the Countryside Alliance marched in London with 500,000 persons taking to the streets in support of hunting with dogs. This was the largest political demonstration in British history up to that time.

In November of 2004, Tony Blair used the Parliament Act to ram home a ban on fox and hare hunting with dogs, despite clear opposition in the House of Lords.

Now, more than five years later, the new Government of David Cameron has pledged to allow some type of vote to repeal the ban.

Whatever one thinks of the posturing on either side of this debate, one thing is certain: it has nothing to do with fox or hare, and only a little to do with dogs.

This is the confused legacy of the Enclosure Movement, still making history in the world of dogs – an Upstairs, Downstairs battle carried out in field, forest and fen.

The political and economic forces that began to differentiate British dogs 200 years ago, are still very much in play, and it’s anyone's guess who will hold the winning hand in the end.

The RSPCA will need a new cause, and no doubt their direct mail campaign is already outlined. Is the demise of working retrievers, setters and pointers just around the corner?

Only time will tell.
.

Thank you for another interesting commentary on dogs, past present and future. It's always thought-provoking.

great read. do you write for dogs today regularly?

Thank you both! Yes, I write a monthly.

I really like the depth and breadth you bring to these essays. Excellent reading!

Folk have been breeding for desired traits in Dogs and Horses long before that.
Combat Bulldogs/Celtic Greyhounds, Heelers/Vermin killers wee all here when the Romans arrived.
Among other types.

Common sense is breed like to like, type to type and best at job to best at job.
Its not a recent idea.

By the way.
I dont think in terms of breed.
Just type.