Here's what you need to know: 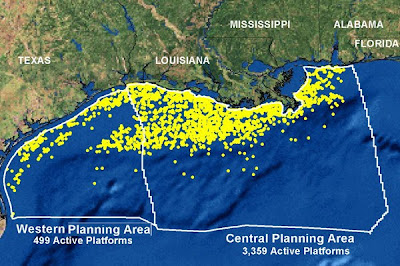 So, here's the plot: there's this drilling platform in the Gulf of Mexico. Looks like it's gonna be one of the best drills ever. Everything is going smoothly till **WHAM!** there is an explosion and disaster.
At first, the oil company says there is minimal leakage, environmental teams are sent down from Washington, Baton Rouge and Mobile. News crews are are everywhere.
But something goes wrong the leak gets bigger and bigger, oil company execs start blaming the other guy, politicians hold news conferences saying that big oil is responsible and they will pay, news crews with live feeds are everywhere, they interview the local shrimpers and fishermen whose lives affected by the incoming crude pulsing through their waters, polluting the Gulf and washing onshore. Environmentalists go out to save the birds and animals covered in crude, while their bosses try to get some spin on this for more donations to their coffers.
Attempts are made to cap the well but nothing is working, there is no real solution in sight. Who can stop this leak, this disaster? Who can save us?
Now let me ask you is this the blockbuster movie of the year? the decade? or What?
**If Hollywood can't stop this leak, who can?**

Angelina Jolie and Liv Tyler in skin tight wet suits would be my bet!

And, of course, the President would be played by Morgan Freeman.

I've been thinking the plot needs some good guys, and the hero(es) of this blockbuster:
a) Nerdy petroleum science geek with the idea to place a bomb well head,
b) Navy seals in a minisub planting a bomb to implode the well, and
c) Investigative news reporter (female role here) who gets the goods on oil execs and gov't officials (so many to choose).

As bad as this event is for the environment and wildlife, I had to laugh when they were talking about "top kill" and piling cement/junk on top of the pipe.

If the concept is at all similar (it is in my mind, don't know if this is true for oil wells), I learned a long time ago that putting my thumb on the end of the hose to stop the water flow pretty much didn't work...it had to either be turned off at the source or have some sort of special spigot that would allow the water to be turned off and on at will.

Well, they have their director now! James Cameron has been called in to consult. For real. Hey, I understand he's a brilliant guy, which BTSO the BP Bozos whining about wanting to "get back to their lives" and their South of France vacation homes.

BP CEO Tony Hayward whined that he
"wanted to get his life back" after all the negative publicity.

Keith Jones had another thouught:

"My son died aboard the Transocean Deepwater Horizon. That's whose life Tony Hayward ought to want back," Jones wrote in signing a petition calling for the executive's dismissal.

This video feed is far better than what is being shown on TV. The counter is depressing as hell, though.

Dag, Patrick, judging by our respective posting times, we BOTH need to get more sleep, lol. My problem is life is just too damned interesting, and I want to read, see and DO everything. If only I were a trust fund baby...just not funded by BP!