Underneath every bird's feathers lies the quickening heart of a velociraptor.

And sometimes it shows. As the Associated Press reports:


As more states move to ban restrictive livestock cages, the campaign to free egg-laying hens from cramped cages and shift them to pens animal rights advocates call more humane could be poised to unintentionally boost deaths among those birds.

Researchers say decades of breeding to make the white leghorn hens that lay most of the nation's eggs more productive have also boosted the birds' territorial instincts, making them prone to pecking attacks so fierce they're often called "cannibalism."

Scientists and egg producers warn that deadly skirmishes that start with feather-plucking and turn into bloody frenzies when a bird's pecking breaks a flockmate's skin will increase if those same aggressive hens are moved from small cages with five to 10 birds to open pens that can hold dozens.

Animal rights groups want those pens to replace the small "battery cages" they call cruel because hens are so confined they can't even spread their wings.

The fact that chickens are vicious little bastards is not exactly news.

Cock fights are predicated on the idea, and yes they still occur the world over, whether in a ring and watched by betting men, or unseen in the gloaming light of the chicken coop. 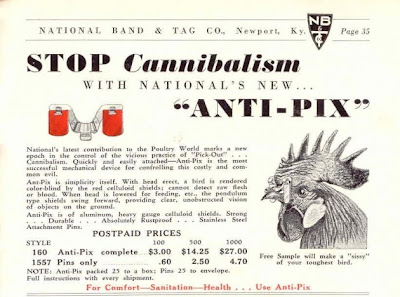 And, of course, chicken cannibalism has always been with us.

The above ad is from 1939, and is trying to cure the problem by fitting chickens with little spectacles to block their vision when they raise their heads. The glasses were held in place by pushing a metal pin through the chicken's beak.

Of course these spectacles were rejected, as was the idea of keeping massive numbers of egg layers in "free range" houses where cannibalism was highest and where eggs were soiled, spoiled and smashed.

Instead, we went to individual cages, with a small number of birds in each cage, not because this was cheap or in a desire to be cruel, but because when raising 200,000 egg-layers, an investment in cages prevents chickens from being cruel to each other.

Of course, all of this massive chicken-and-egg production is predicated by a simple fact: We no longer live in the age of schooners and candles.

While backyard chickens may work for some, they do not work for most and never will.

Here's a fact: 70 percent of all Americans -- 210 million people out of America's population of 300 million -- actually live in urban areas which comprise just 2% of America's land mass, and 60 million Americans live in our core central cities.

And guess what? Backyard chickens are generally prohibited in those areas and not without reason. People don't pick up after their dogs; you think they are going to pick up after their chickens? You think chicken shit, chicken feed and chicks don't attract rats by the barrel? I assure you they do. So, yes, backyard chickens can work for some (generally folks who treat their birds as pets and who never actually take one to the pot for food), but they will never work for most Americans.

Meanwhile, out in forest and field, far from farm theory, it is the cruel season, as fox predate turkey chicks, goose nests are decimated by flood, fox kits are buried under the plow, rabbit scrapes are torn apart by bushhogs, and hawks pluck small birds while still alive to feed to their always-hungry chicks.

In Asia, where the wild chicken, called the jungle fowl, still roams, more than 65% die before they reach the age of three months.

Life is short and harsh, and rarely idyllic outside of the parameters of a farm yard.

Of course this is as it has always been. Chickens lay a lot of eggs for a reason -- they are supposed to die by the trainload, and yes most of those short lives are supposed to be miserable (i.e. death at an early age from disease, flood, weather, and predation).

This is not a matter of opinion, but of fact. Food chains exist for a reason, and so too do rates of reproduction, which are the response to the Call of the Wild.

If you know the fertility rate of an animal, you also know a lot about its mortality, and the relative "value" that Mother Nature places on any one of its lives. A whale or an elephant then, is more important than a human (and generally has a less miserable life), and so it goes down the chain to cow, chicken, and stink bug.

The job of a chicken, then, is not to be happy, but to be a self-sustaining food source for other animals. That is the purpose of the chicken and why it was put on earth.

Is there any animal in America that is more common than the chicken?

From a purely Darwinian point of view, they have been a great success. Not only have they taught man to house, feed and water them, but they have taught man to police their coops to mitigate chicken-on-chicken violence.

And when death does come (and it must), the death is as swift and as pain-free as possible.

Only a human would consider this failure. A chicken, I suspect, does not.

But don't take my word for it -- go to a commercial chicken house and open the door, and see how many chickens rush outside. Not a one, I will bet.

Email ThisBlogThis!Share to TwitterShare to FacebookShare to Pinterest
Labels: farm

These people remind me of well meaning fools, they see an alleged injury, they know and care very little of the actual conditions and their demands to correct the injury lead to worse conditions and/or situations.

You don't know much about commercial egg production. For starters, egg laying hens are not kept in individual cages. They are kept in cages with 4 or 5 other hens. They prevent cannibalism by debeaking the birds. That is where the egg of the beak is seared off.

Hens can fight sometimes, yes. But as someone that grew up raising chickens, with adequate space they are fine.

I am pretty comfortable with what I know about chickens, "Heather4animals".

I see you are a Vegan PeTA-pusher. Excellent. I like diversity in the world.

I also see that you had an ad up on the Los Angeles Craiglist under "women seeking women". Let me see if I can help you out. Your ad ran: "Sweet and cute wants to IM and see where it goes. I'm on AIM as heather4animals if anyone wants to chat. Here is my pic. Of course it goes with out saying, but ladies only...."

Nice. Help the girl out girls.

If you knew very much about chickens (which you probably do not since you are in Los Angeles), you would know this.

The good news is that you can go to Wikipedia at http://en.wikipedia.org/wiki/Debeaking and find:

"Mortalities mainly due to cannibalism can be up to 15% in egg laying flocks housed in aviaries, straw yards, and free-range systems. Because egg laying strains of chickens can be kept in smaller group sizes in caged systems, cannibalism is reduced leading to a lowered trend in mortality as compared to non-cage systems."

Also, might I recommend reading this little aricle ( http://www.statemaster.com/encyclopedia/Debeaking ) which notes:

As for cages, the CAGES are individual, not the birds. Birds are housed in small clusters of any number (not just four or five), and cage sizes vary with anywhere from 3-12 birds in a cage.

Google is just as deadly as an angry chicken isn't it. We drove back with 3 of these things in a nice big comfortable crate this past weekend. Plenty of room to spread their wings. Only 1 alive when we got home.

I also 'grew up with chickens', in the form of an early kind of free range -slash- battery. In essence, it was a large area where the chickens roamed free.

Let me tell you, there weren't a lot of happy chickens sitting around and singing Kumbaya while making each other friendship bracelets.

Instead, what those free roaming chickens seemed to really, really like doing was finding one weak chicken, and pecking it to death.

Feeding them was *tons* of fun, as they also liked to rush your ankles and peck at you, given a chance.

And don't even get me started about the rats - where there are large groups of free range chickens, there tend to be rats. Lots and lots of rats.

Nothing says 'nostalgia' like the memory of one of them running down your arm while you tried to fill a feed bucket from the grain sluice.

Not surprising, genetics plays a role in cannibalism in free-range laying hens

We have raised chickens for meat and eggs on a small-scale commercial level and the viciousness in leghorns is very very real. There's something about seeing a chicken disembowelled and consumed, still squawking by its barn mates that chills the soul. We made our peace with debeaking pretty quickly! We did sometimes get escapees, but not a lot -- they're definitely happier inside.

We made our peace with rat poison pretty quickly too, once we found a version with low toxicity to secondary species, much to the disgust of our dogs. Thankfully, our dogs didn't touch dead ones.

You haven't mentioned the other thing with chickens. If you don't dispose of the dregs of chicken feed rigorously, you also get wild birds, which sounds good until you realise they're vectors of many diseases, including bird flu. You will, at the minimum, lose your flock and at the worst, compromise your own health.

A few chickens scratching around a garden is fun, but if they need to pay the bills, your management style quickly has to change.