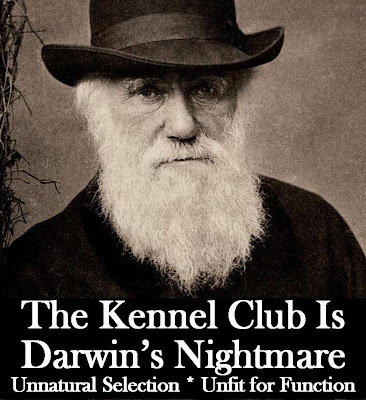 Patrick Bateson's much-anticipated report on the future of Pedigree Dogs in the U.K. will be coming out tomorrow.

This report was commissioned by the Kennel Club itself, and early reports are that it will be a barnburner. As K-9 Magazine notes:

The report comes hot on the heels of two other recent studies in to dog health, namely the APGAW report and the RSPCA funded study. Both previous studies drew similar conclusions and endorsed the message broadcast by the BBC documentary, Pedigree Dogs Exposed.

Prior to Pedigree Dogs Exposed, this blog framed the history of the Kennel Club's "Inbred Thinking" -- a post that appeared as an article in the May 2008 issue of K-9 Magazine.

To read that article and understand some of the issues that may be framed in tomorrow's report, click here.

For those interested in getting a jump on what might be in the Bateson report, I append some links to pre-release news stories starting to leak out.

Note that these article are not necessarily correct about what is in the Bateson report. With that caveat, they make for interesting reading....

Want to be the first on your block to read the report when it comes out? Excellent! Come back tomorrow and I will post post a link and highlights.

Another shoe is about to drop.