From Pearl Harbor to a Robot Economy 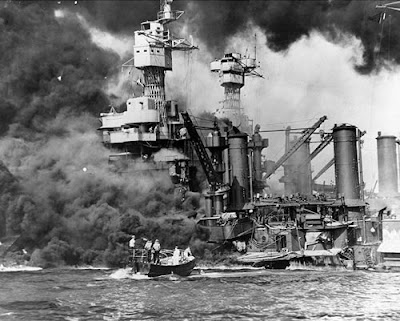 Today is Pearl Harbor Day, but if you ask a dozen people why Japan bombed Pearl Harbor back in 1941, not one will give you a complete answer.

Here's the short story: Too many people.

The entire War in the Pacific was initiated by overpopulation.

There is no "beginning" to this story, but suffice it to say that Japan was a very isolated country up until the late 19th Century. With the arrival of western influence, Japan began to change and demand for "western" goods such as steel and oil, skyrocketed.

So too did population.

In 1870, Japan's population was estimated to be 33 million. By 1900 it was about 45 million, and by 1930 it was over 64 million. An island nation, Japan's economy and social systems were beginning to show real stress by the second decade of the 20th Century. A key issue was lack of farm land.

Looking across a short stretch of ocean, the Japanese saw a vast amount of farm land and raw resources in northern China. In 1931 Japan invaded that region -- Manchuria -- in order to satisfy their "shortage" of resources which, in reality, was a "longage" of human population.

World War II is a long story, but the short version is that we won.  Japan had to give up its land grabs in Manchuria, Korea, the Philippines, and elsewhere.

After the defeat of Japan, Gen. Douglas MacArthur encouraged the development of new laws in Japan, including laws to allow women to vote and to hold elective office. In addition, he encouraged the amendment of Japan's pre-World War II pro-natalist law so that it now legalized abortion (which remained illegal in the U.S. until 1973).

Why did MacArthur and the Occupation Forces turn Japan's old "pro-natalist" law into a "pro-choice" law?

Basically, because they understood the causal origins of World War II in the Pacific.

Japan's overpopulation (or over-shoot of its resource base) was seen as a core issue of geo-political consequence. Slowing Japan's rapid population growth rate was, therefore, at the top of both the national and the global agenda. As one Japanese web site (written in semi-fractured English) notes: "How to popularize family planning became the No.1 policy in health care of postwar Japan ..."

With the end of WWII Japan switched from being a pro-natalist country to being a country that was interested in slowing population growth.

After the death and carnage of World War II, no one in Japan needed too much encouragement to consider voluntary family planning as an alternative worthy of consideration and support.

How did fertility fall so quickly in Japan? The mechanics were simple and effective, if not particularly modern or enlightened: Condoms and abortion. To this day, these are the primary birth control options available to Japanese women. Though Japan is on the cutting edge of electronics, they are in the Dark Ages when it comes to contraception. Low-dose oral contraceptives, medicated IUDs, injectables and implants were still not legal in Japan as of 2004, and the diaphragm is no longer produced there due to lack of demand. High-dosage pills and the copper IUD were only approved in Japan in 1999.

Despite the lack of contraceptive options, the Japanese saw rapid and amazing reductions in fertility after 1945. While the rest of the world experienced a Baby Boom, Japan saws its total fertility rate (TFR) fall from over four to two in the space of just 15 years -- a phenomenal rate of reduction even by today's standards.

One factor driving fertility reduction was later age at marriage. Another factor -- too often overlooked -- was crippling poverty after the War. Japan in the late 1940s and 1950s was a miserable place, and few people could afford to have the large families they did prior to World War II.

The real driver of fertility reduction in Japan, however, was a desire for peace and prosperity. While prior to WWII large families had been seen as a source of prestige and economic growth, afterwards they were seen as destructive to the long-term peace and economic self-sufficiency of the nation.

Japan's new small-family ethic was fueled by both central government and local Government commitment to the goal of slowing pre-war rates of human population growth. A system of midwives, nurses, family planning clinics and doctors was put in place and it took root with assistance from the Family Planning Federation of Japan (FPFJ) and the Japan Family Planning Association (JFPA).

While very wide, Japan's family planning program was not very deep. Despite a post-war interest in reducing the number of births, Japan has never really subscribed to what we in the U.S. think of as a "comprehensive" family planning program. Sex education in schools was (and still is) poor, and access to a full range of modern contraceptive choices was (and still is) very limited. In the 1950s, 60s, 70s, 80s, and 90s, the only "modern" contraceptive option was the condom. Though effective most of the time, the condom is not a perfect contraceptive vehicle. To be precise, condoms have a per-use failure rate of about 3%, which means even with "perfect use" the contraceptive device fails about 3 times a year on average (yep, 100 times a year is "average" according to the people that count these things).

In actuality, of course, we do not live in a perfect world with perfect and consistent humans. Due to inconsistent product usage (i.e. situational nonuse) the "real world" pregnancy rate for couples using only condoms is somewhere between 10 to 15 percent (numbers vary depending on the study).

Bottom line: There were (and are) quite a lot of abortions in Japan.

In 1996 the pre-World War II law was further amended and it is now called the "Mother's Body Protection Law" and remains the principle family planning law of Japan.

Today, Japan's total fertility rate is 1.4, one of the lowest in the world.

The good news is that Japan's population has very nearly topped out. The bad news is that it took 45 years AFTER it hit replacement level fertility (and then went far below it) to achieve this goal. And this is in a country with essentially zero immigration.

Today, across the world, the effect of Japan's post-World War II population growth is felt in the form of massive factory-like fishing fleets that prowl the world's oceans to feed that nation.

In the Southern U.S., massive chip mills pulp our forests to supply pulp for Japanese paper and wood-strand mills.

Forests in Burma, Indonesia, and Vietnam are being chainsawed to supply plywood. Around the world chainsaws and oil derricks crank out product going to a nation that had already "overshot" its resource base by 1931 -- and whose population has doubled since then.

While Japanese fertility declines have yet to translate into a smaller population size (I doubt Japan will ever return to a population small enough that it can actually live within the "carrying capacity" of the nation itself) a great deal of "Global Good" has come out of its lower fertility rates.

One bit of "good news" for Japan and the world was a tightening of labor markets that began to occur in Japan in the late 1970s as the low-fertility rates of the early 1950s moved their way up the population pyramid. As wages of entry-level workers began to rise in Japan due to labor market constraints, Japanese businesses began to export capital overseas in order to take advantage of lower-wage labor pools in developing countries (much as many U.S. businesses are doing today). Much of the "miracle" economic growth of South Korea was, in fact, abetted by Japanese money going overseas due to fertility declines in Japan that had begun 20 and 30 years earlier.

Japanese investment in Korea's economy, in turn, helped improve the status of women there and helped speed urbanization, which in turn helped to reduce fertility rates in that nation.

The same labor market constraints that drove some Japanese businesses to export capital in order to find cheaper labor drove other Japanese companies to automate. Today, Japanese industry has more robots and complex automation systems in place than any other country in the world -- one reason that both Japanese productivity and quality remain quite high.

Are there lessons here for the rest of the world? I think so.

Though far less pronounced than Japan's labor market contractions (due to a very long Baby Boom, higher domestic fertility, and high rates of international immigration here in the U.S.), U.S. capital movements to Mexico and other nations seem to be doing for these nations what Japan's money did for Korea (albeit at a slower rate due to increased diffusion of our capital over a larger area).

At the same time, the very same labor market forces that worked to push automation in Japan are doing the same here at home where timber, steel, and manufacturing plants are producing more products with less labor (and at higher quality) than ever before. Though we may not think factory automation has an environmental component, it most certainly does -- automated plants, as a rule, waste far less than their non-automated counterparts.

For a country like the U.S., where the total base numbers are already very large, this is a very sobering thought.

In terms of absolute population size, the U.S. is already the third largest country in the world.

In terms of population growth rates we are not yet where Japan was in 1955 thanks to a combination of massive immigration and the highest fertility rates of any country in the industrialized world.

According to the U.S. Census Bureau's middle-series projections, the U.S will add more people to its population in the next 50 years as currently live West of the Mississippi River -- and this is the middle-series (most likely) projection.

Our population growth will not end there, of course.

Once the Population Juggernaut starts to roll, it tends to roll a heck of a long way before it comes to a stop. This has been true for Japan (which had rapid and sustained fertility decline and no immigration) and it will be even truer for the U.S. (which has non-sustained fertility decline and high immigration). It will be even more true for countries in Africa, Asia and Latin America that are still some distance away from achieving replacement levels of fertility.
.

Another great post! The connection between population and World War II (or any other wars, for that matter) is too rarely pointed out.
I don't suppose you know the Japanese word for "Lebensraum"?
John McConnaughy

In Japanese propaganda the invasion of China was described as a "holy war" (seisen), and the first step towards "Hakkō ichiu" -- putting eight corners of the world under one roof.

Over-population is implicated in the Rwandan genocide too: as a small, highly agricultural country with high birth rates, farm sizes are some of the smallest in the world and something had to give. It's one of the reasons the Rwanda government has invested heavily in technology: they're desperate to get people *off* the land and into higher productivity work where smaller family sizes will come with it. http://www.bbc.co.uk/news/world-africa-36285889

The problem isn't just population growth. What accelerates our push beyond sustainable limits is population growth coupled with expectations of higher material wealth per capita. One thing both sides seem to agree on in every election is the need for faster growth and more consumption. China used draconian measures to slow population growth. But rising standards of living lead to horrendous problems of pollution and depletion of natural resources.