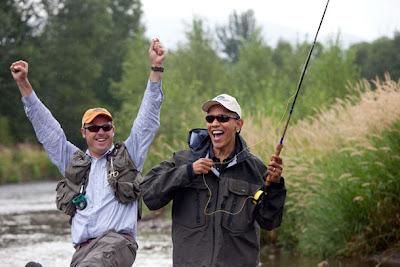 Barack Obama isssued a proclamation today, that Saturday, September 26, will be National Hunting and Fishing Day.

I will be celebrating it one day late, hopefully in the field with Camera Trap Codger who is down this way to visit his relations.

So what does the Proclamation say? Here goes:

BY THE PRESIDENT OF THE UNITED STATES OF AMERICA

From atop Pikes Peak to the shores of the James River, Americans celebrate the great abundance and utility of our natural resources. Since our Nation's founding, hunters and anglers have cherished these unparalleled natural gifts and marveled at their untamed beauty. National Hunting and Fishing Day recognizes the contributions of millions of Americans who continue to engage in these ageless pursuits.

Following in the centuries-old footsteps of the pioneers who walked before them, hunters and anglers have played a key role in the conservation and restoration of numerous species and their natural habitats. They not only understand their pivotal role as stewards of the land, but also seek to pass on this honored tradition to future generations.

As our citizens continue to enjoy our Nation's natural resources, we must remember that this privilege brings great responsibility. Not long ago, hunting threatened the extinction of the American Bison, an enduring symbol of the American West. Today, their population has recovered because of the cooperative efforts of conservationists and hunters. Many species, however, still require our protection. We can no longer look to our wilderness, as some once did, as land full of unlimited bounty and surplus. Recognizing the need for conservation, our hunters and anglers have worked hard to manage local ecosystems where wildlife remain, as well as to protect those areas where they are slowly re-establishing viable populations.

Our national character, always evolving, finds its foundation in those timeless American ideals of freedom, fairness, and self-sustainability. Today's hunters and anglers bring this spirit to life in the forests and streams they visit. If not for America's great hunters and anglers, like President Theodore Roosevelt and Aldo Leopold, our Nation would not enjoy sound game management; a system of ethical, science-based game laws; and an extensive public lands estate on which to pursue the sports. On National Hunting and Fishing Day, we celebrate their contributions to our natural environment and our national heritage.

IN WITNESS WHEREOF, I have hereunto set my hand this twenty-second day of September, in the year of our Lord two thousand nine, and of the Independence of the United States of America the two hundred and thirty-fourth. 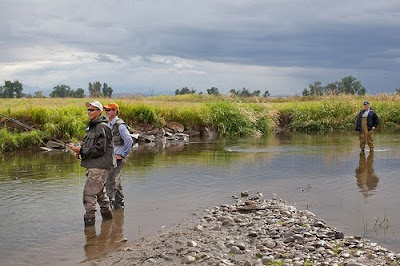 Drill here? Drill now? How about we fish trout instead?

But I thought Obama hated guns and hunters and wanted to throw all of hunters into FEMA gulags?

I guess I gotta stop listening to Glenn Beck!

Dude! Beware! It's a trick. He's lulling you with proclamations while he gets his socialist dream team into place and then takes all the gunz.

C'mon, Patrick. You know you can't trust the man. He's muslin! Not good ole 'Merican cotton -- muslin, I tell you! And he hates white people, even his mom and grandma!

But he LOVES white polar bears. That's why after the Death Panels condemn Grandma and Pop-Pop they will be shipped to Alaska ("We can see Russia from here!") and dropped onto ice floes for polar bear lunches. Reduce, reuse, recycle!

This is great, I hope that Africa can learn from the journey that America has made and harness our hunters and conservationists here to work together to conserve the environment and build the economy at the same time.
Jonathan CT