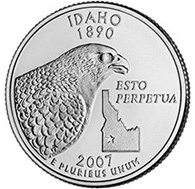 Over at The Peregrine Fund, they quote Hank Paulson who spoke briefly, a while back, about the fact that a Peregrine Falcon now graces the back of the Idaho quarter:

"Today we celebrate a distinctive state quarter and the recovery of the Peregrine Falcon. Millions of Americans will have the chance to collect the Idaho quarter and learn more about this spectacular bird."

Not said: Paulson is a hard-core birder himself, and a former Chairman of both the Peregrine Fund and the Nature Conservancy.

Though obviously doing other things at the moment, Paulson said, back in 2007 that he hoped to attend "a number of the hawk watches" soon.

"Sometime in the fall of 2009 I'll be back to banding again, but for a while I'm trying to band asset-backed paper" 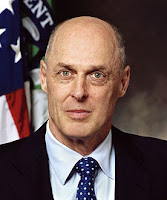 Paulson is, for the record, an avid nature lover who, as Chairman of the Board of The Nature Conservancy worked with former Chinese President Jiang Zemin to preserve the Tiger Leaping Gorge in Yunnan province.

As Chairman of Goldman Sachs, Paulson also oversaw the donation of 680,000 acres (more than 1,000 square miles of forest) on the Chilean side of Tierra del Fuego.

Has anyone ever mentioned any of this in all the press clips about Paulson? Not often. Not often enough.
..