The juxtaposition of poorly shaped humans and their beauty show dogs is something no one can fail to notice at a dog show.

Why are dog show people so often poor physical specimens?

The answer, I think, is that these are people who are self-selecting. They are people who are looking for a "sport" in which no physical exercise is required. In fact, it is a sport in which no knowledge is required. All you need is a small checkbook to buy the dog (even the best dog will be cheaper than a very bad used car) and then you brush out the dog and learn how to walk it around the ring and stack it. If you have enough money, you can even hire a professional handler to actually do that; that's how Bill Cosby and a thousand others do it.

Dog showing is also a hobby which attracts a lot of retirees or other people who do not work fulltime jobs. With age, often comes width.

The funniest juxtaposition in the world of dogs may be the fact that so many of the people attracted to "the fancy" are decidedly unfancy themselves. Often these are middle- to lower-middle class folks with very prosaic roots whose heritage is evident in their taste for double-knit pants suits and clip on ties. These are folks who toil in anonymous jobs and who have now gravitated to dogs as a way of deriving reflected social status. Yes, their own background may be as common as a turnip top, but did you know that Prince Tuckahoe of Heaven's Gate has seven champions in his pedigree! 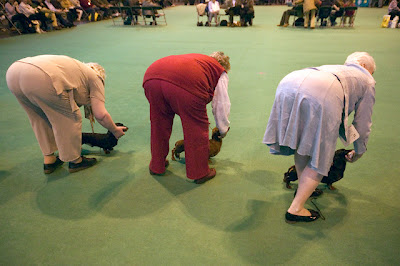 Crufts dachshunds in the ring, 2005 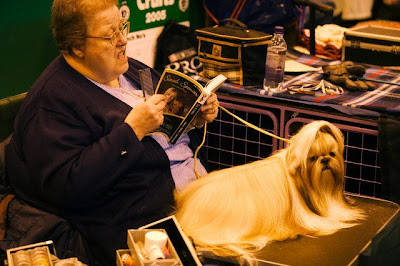 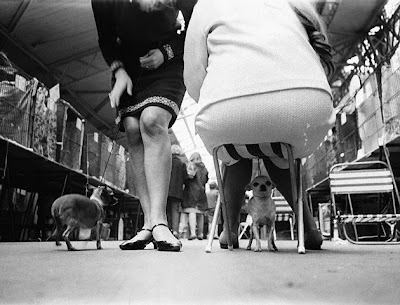 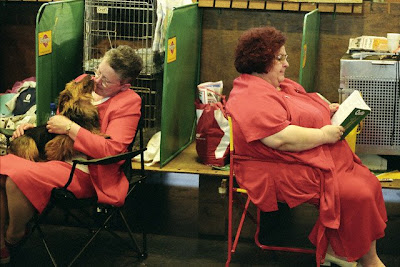 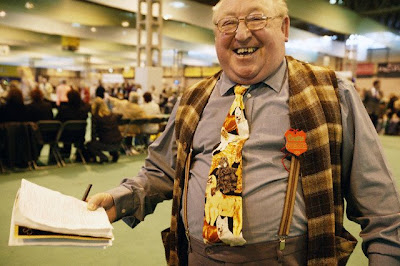 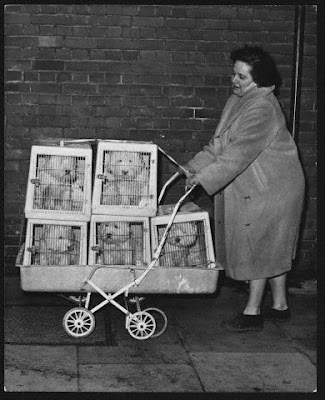 You have captured the spirit and feel of Crufts exactly Patrick. Can't wait for the 2009 yearbook.

this is classic. i confess that i like going to shows and showing my terriers. when i look in the mirror this piece suddenly comes to life, i am lean like a whippet, covered in scars and a few tattoos from my misspent youth, with a broken tooth for good measure, not to mention a speedily receding hairline. a bit like a well worked lurcher. i'll probably get a whack if i turn my ettention to the rest of my crowd now, but this was fun.

Conformation dog shows became popular in Victorian England when members of the lower and middle classes "discovered" them as an affordable way to participate in an upper class pastime. This very early tie of pedigreed dogs and dog shows to Victorian ideas equating human pedigree and breeding to the worth and nobility of a man also helps explain how kennel clubs started out with rigid ideas of eugenic purity.

What it doesn't do is explain why they still hold so firmely on to them. For that answer we'll need to look to cognitive science instead of history.

So you missed the fat MAN did you Suz? It turns out that most of the people at dog shows are women!!

Why is that, do you suppose? Sounds like "Best in Show" was overly gender balanced.

Best in Show got it about right, with a parade of broken people, many of them in dysfunctional relationships, and overtly working through "the issue" that so many dog show people have -- lack of children.

See this post, in which I use video clips from that movie (and one from the old Bravo TV show about dog shows), to discuss the cultural comedgy of dog shows >> http://terriermandotcom.blogspot.com/2006/12/comedy-of-dog-shows.html

I also find the idea of having "handlers" horrible. That you could care so little about your dog that you have it live with someone else most of the year. Yeah, that's what dog ownership is all about.

However, with the owners that have handlers, the dog is probably better off, and the handlers usually do care. So in an odd way, it works out, until the dog can't show anymore, then he's just a liability.

Having a handler is a sure way to miss out on all the ways dogs help the rest of us grow by getting to take care of the them in live with them day to day.

Someone sent me a priceless shot from Crufts, but I will not use it unless I really need to be mean to the folks of a certain terrier breed :: whistle :: Pluse, it might scare the horses. Please people, wear appropriate attire for bending over!