The Kennel Club: Paying for Both Trial and Verdict? 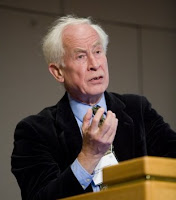 Sir Patrick Bateson, Emeritus Professor of Ethology at Cambridge University and president of the Zoological Society of London, has been tapped to review the registration and showing of dogs in the U.K.

Suffice it to say that this "review" is being set up and funded by the Kennel Club and Dogs Trust, but we are told that "it will operate independently of both organisations."

Might happen. Strange and unexpected things do occur! I once saw a man eat 22 ears of corn at a single sitting and wash it down with a gallon of beer.

But back to the facts. What's an Emeritus Professor of Ethology you ask?

Simple. The "emeritus" part simply means he is retired. Bateson was born in 1938, which makes him 71 or so.

An ethologist is simply a ten-dollar word for an animal behaviorist.

The science of ethology is based around four core issues and questions:

1. Function — How does behaviour impact survival and reproduction?

2. Causation — What makes the animal respond and learn?

3. Development — How does behaviour change with age?

4. Evolutionary history — What behaviors are common (and different) between related species, and why?

The good news is that Bateson clearly does not hold science in contempt as so many in the Kennel Club do. Apart from that, I will reserve judgement and hope for the best. Who knows? Maybe this is not a simple job of window dressing as public relations. You will pardon me, however, if I keep my expectations low. Does Bateson have a mandate to do something other than look busy? What is the goal? What does success look like? How will anyone know if it is ever achieved? No word on any of that.

I should note, in passing, that Bateson is a distant relation of geneticist William Bateson and anthropologist Gregory Bateson.

William Bateson was one of the earliest geneticists (he actually coined the term "genetics") and he was smart enough to shun the idea of eugenics -- the core idea upon which the Kennel Club has built its rickety theories of canine improvement through breeding within a closed registry system.

Does that mean anything?

Not a thing. Drift occurs in perspective and ideas, as well as genetics.

At age 71, we can only hope that Patrick Bateson is his own man, and that he will tap others who will put common sense and sound science front and center in order to improve the long-term health of dogs. Knock on wood. But keep your expectations low.