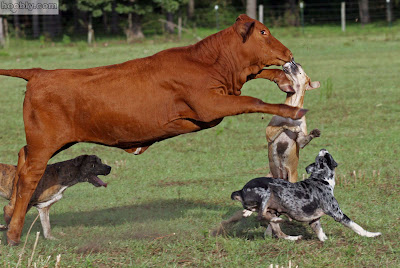 
Kenney Benoit writes of a lesson learned from his Grandfather:

Thank you ever so much for running a wonderful site. I am glad that someone has clearly stated what has been known for so long.

As a kid growing up I was around my Grandfather who raised Catahoula Cur dogs to work cattle on his farm. The dogs were used at least twice per week to bring cows from the woods to pens, for round ups to castrate calves, to pen cattle heading to the sale, to pen cows for worming and vaccination, and to hunt hogs that were turned loosed by a miss guided hunter. This was a tradition, a way of life passed down from his father. When he was younger and in his father's day they had no free range laws and the dogs were used to work cattle and hogs that were loose in the woods, free range animals. He admits that it was a lot more work for everyone involved, back then, including the dogs.

I inherited coon hunting and hounds from my father. As a result to compete in the events the dogs had to be registered with the Breed Club that you were hunting them in. So naturally I thought that the registered dogs were always better. Heck registered dogs cost more they must be better, look what they are worth.

As I aged I figured that I would provide my grandfather with a present. What better than a registered dog from the breed that he love, a Registered Louisiana Catahoula Cur. Boy I was proud of myself and just knew that Grandpa would love the present. I am glad that he loved and cared for me regardless of the gift. It turned out to be a disaster and a great learning experience.

The dog turned out to be a complete buffoon. My grandfather knew it from the day that I gave him the dog and actually castrated the dog as soon as the testicles descended. I couldn't understand it. No other dog that he owned was castrated why in the world would he castrate the "well breed registered dog" that I bought him. The reason was he didn't want the pure breed stock to screw up his mixed up mutts. I now know that he only kept the dog because it was a present and he didn't want to hurt my feelings. I had seen him knock better dogs in the head because he wasn't feeding an animal that couldn't do the job he kept them to do. As it turns out the dogs was almost deaf and really very unintelligent.

That is when Paw Paw began to school me on dogs.

You don't own a dog that doesn't have a purpose.

You don't keep a dog that can't perform the job he was bred to do.

Paper is for wiping your rear, not to show how good a dog is, that is proven (can't be shown on paper) when you put him to work.

Never buy a dog from someone who just raises and sells dogs.

. . . and much more than I couldn’t have learned else where

Then he began to tell me how the registered dogs had all kinds of problems. Most people that owned them didn't even use them except for decoration and a conversation piece. He said he didn't want dogs from people that didn't know what a dog was for. Then he went on talking about how people liked dogs with certain colors, glass eyes, and all kinds of features. He knew he wanted a dog that could work. He would breed his dogs to others dogs that really worked and it wasn't always a Catahoula Cur. Heck it didn't even have to be a "pretty dog". Some were fuzzy, funny colored, and could be considered ugly by someone who didn't know a damn thing about dogs. They might not have looked it to the untrained eye, but the dogs were healthy, structurally sound, weren't too big, could work in the heat for hours on end, and they were beautiful to anyone who needed to get the cows into the pen. They were the real deal. He wasn't in the business of raising and selling dogs. He raised cattle and used dogs as a tool.

He new something 30 years ago as common knowledge and he passed the information on to anyone who had an interest and capability to understand what he was speaking about.

Since then my dealing with dogs became allot more fun. I began to enjoy the dogs again. I found pleasure and happiness in mutts. Some of my best remembered hunts came behind a dog whose father was only known as “The neighbor’s sneaky damn cattle dog” (according to Grandpa). I gave up the high dollar hunting dog meets, and politics that go with it. Even then my dad wouldn't let us show the dogs in the beauty contest. He knew that didn't matter and in the words of a many a coon hunter "The bullshit stops when the tailgate drops".

I have now found a love for the terriers. They don't eat as much as those big old hounds. I ain't ever had to chase one all night to get him off a deer. They are easily accepted by others and don't look vicious. They do well with the family and live with us rather than in the kennel out back. They tree coons and possums, hunt squirrels, they can run a rabbit, they do it all, and most deer hunter don't mind me chasing critters where they deer hunt. With the walkers and blueticks they were always scarred that they were going to run the deer out of the country.

It goes on and on. I too have seen the ruin of many a breed of dog by the registering bodies. Just like people a dog can't be judged by who his daddy was.

I have enjoyed finding like minded people as you.

What a great story!

And a very sincere thank you for sharing it, Kenney. Your Grandfather would be very happy to know that you are "passing it on."
.
.

Let the boardmembers from the kennelclub read this!!

Thanks for sharing this great historic story.

The UKC pulled the Catahoula in back in 1995, and the AKC has the dog in their Foundation Stock Service, which is their "on ramp" to AKC recognition. Both registries often greenlight a breed with just a few dozen members, and scores and scores of of breeds have been admitted (and the registry closed) with less than 100 members. The Catahoula Cur is also knows as the Catahoula Leopard Dog or simply Catahoula.

(2) "Both registries often greenlight a breed with just a few dozen members, and scores and scores of of breeds have been admitted (and the registry closed) with less than 100 members." Is this information available somewhere online, or just based on your own research and knowledge? Thanks.

Lovely story. 'The bullshit stops when the tailgate drops'.

You know there is nothing like the old timers. I apprenticed under a variety of old school animal trainers and the bullshit does stop when the cage door opens (wild animal trainer' version).

I recently had the pleasure and agony of working with several Louisiana Leopard Dogs aka Catahoulas.

The breed potential is amazing but the poor mating choices and lack of socialization and lack of a jog (all dogs need jobs) made for a messy situation.

I'll save you the details but the toughest of the three had light blue eyes to go with his reddish coloring--striking but he couldn't see too well and startled at just about everything.

The guy worked on a dime but enter any variables or vary the routine (I am of the school that you need to be consistent not predictable.) and he fell apart.