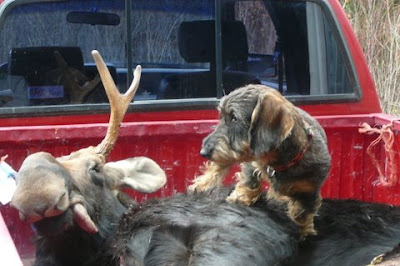 
What's the difference between a dachshund and a teckel? Mostly the owner in my opinion.

A dachshund owner probably bought the dog because it was cute and along the way he or she discovered that their dogs (a long time ago, and in a land far away) was once used for hunting badgers. Badgers? Oh my! How romantic!

A teckel owner, on other hand, actually has pictures of their dog in the field working groundhog, fox or badger, or blood tracking shot deer, elk or moose. A few shovels and a worn pair of boots and a locator collar are probably in the garage. There isn't a single pair of Manolo Blahnik's in the house.

There are, of course, some differences in the breeding of the dogs. American and British dachshunds tend to be wrecked genetic mutants with turned out feet and chests like pickle barrels. Most are far too big to go down any den hole, and some have bad temperaments and health problems to boot.

Teckels, on the other hand, are bred to the German system which emphasizes strict standards in terms of chest size, and where random breedings are sharply discouraged and standards of kennel upkeep and the quality of dogs is maintained by a "breed warden."

All of this is a small wind up to the fact that there is a nice article by Les Davenport in Deer and Deer Hunting magazine on the use of teckels for blood tracking shot deer, elk and moose.

Entitled "The Little King of Deer Recoveries," the article is well-written and gives a nice introduction to the use of teckels (working dachshunds) for blood tracking shot deer.

Another article on the same topic can be found here.

And for those who are looking to include a new blog on their blog roll, let me recommend Born-to-track News & Views -- a very nice addition to the blog-o-sphere!
.

Did you just call us "wrecked genetic mutants?" Us dachshunds take offense to that. :)
It would be great if a breed warden was mandated for all dog breeds, not just dachshunds.

Joey and Maggie
The Long and
Short of it All

I have to put in a plug for dachshunds as companions. One of our community gardeners is an autistic young woman and Cinnamon (a long-haired dachsund) has been a real blessing in her life. By caring for Cinnamon and taking him on lots of walks, she has a companion 24/7 and a "talking point" with the community when she's out walking him. Before Cinnmon, people tended to actively avoid her -- now, they can talk to her about her dog, pet him and tell them both how great they are.

Cinnmon, of course, is the dashund in this YouTube video of our community garden, taken last year when we were being judged for a PA Community Greening Award. Pepper (duh!) is the other dog and Rebecca is the young woman pulling carrots.

(And since everyone is a dog person here, yes, I KNOW Pepper is taking a dump in the background while my cousin waters his plants -- but NOBODY else notices -- especially the plant people, because they are all focused on what my cousin is watering. So, if you mention it, we'll all know what you really care about! ;-) Although, otherwise, feel free to leave comments as the gardener who put this together is a total YouTube fanatic and lives for hits! ;-))

I like dachshunds -- great pets for a lot of people, and a good working dog if bred right, with special strengths in terms of nose and voice. Sadly, hoever, British and American breeders have done all they can can wreck the standard dachsunds, breeding dogs that are far too heavy, with too big a chest, and with serious joint issues as well. Spinal disc injuries are so common in this breed that there is an entire industry devoted to making little wheel-racks for defective rear ends.

Pat,
Thank you for a nice plug for our blog. I certainly agree with your comment. BTW, I hate when people refer to dachshunds as weiner dogs, hot dogs or doxies. It trivializes the breed, which for some represents a very useful versatile hunting dog.

Those of us with small working dogs have to have a sense of humor ;) You have not lived until one U.S. Secret Service Agent introduces you to another as "a known terrier-ist." Of course, as I pointed out, the U.S. Secret Service is now forced to use imported dogs. Know why? Because protecting President Bush is a job no American dog will do! (*rimshot*)

By the way, as you no doubt know, one of the most popular eytmologes for the term "Hot Dog" (as American as apple pie and baseball) is that it was named after the dachshund, not the other way around. See http://www.hot-dog.org/ht/d/sp/i/38594/pid/38594

No, did not know the origin of the "hot dog" term. English is my second language. Anyway, I learned something new - thanks!