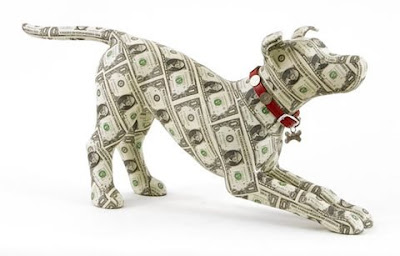 American Kennel Club Chairman Ron Menaker says the Kennel Club needs to register a lot more puppy mill dogs in order to avoid raising dog show entry fees a "staggering" $20 per dog (the price of a movie and popcorn at your local theatre).

The American Kennel Club faces enormous challenges in reversing the continuing decline in registrations. Today, we are losing market share at an alarming rate, especially in the retail sector. We are being challenged competitively and financially. The declining registrations and associated core revenues, if allowed to continue, will fundamentally change our organization going forward. Make no mistake, the very future of the AKC and our sport is at risk.

We can all remember some of the premier “name brands” and companies of the past, leaders in their field. The ones that we thought would be around forever. These giants, these household names, held the same standing as the AKC. Companies such as: Westinghouse, Pan American Airlines, Standard Oil Company, EF Hutton, Woolworth’s, Montgomery Ward, just to name a few.

Today, there are at least 30 All-Breed registries in addition to the AKC, whose combined registration numbers exceed that of the AKC. If this trend is allowed to continue, if we do not stop the hemorrhaging of declining registrations, we will no longer be the premier registry in the world, let alone in our country. Management has been directed by the Board to aggressively pursue all dogs eligible for AKC
registration. . . .

. . . . AKC used to dominate the marketplace. Even places like Macy’s and Gimbels sold AKC puppies. Many pet owners who bought these puppies, and I was one of them, tried their hand at showing and breeding. These owners who purchased their first purebred from a retail outlet, not only added to AKC’s registrations, but those who wanted to advance in the sport, then sought out fanciers to continue their
journey. . . .

. . . . If the current trend continues and dog registrations decline to 250,000 over the next several years, AKC will face an annual revenue shortfall of $40 million. To put this in perspective, if this scenario occurred, and we relied solely on raising the
event service fees to make up for this revenue shortfall, the fee would be a staggering $20 per entry.

Suffice it to say that in order to recoup the money lost from dog shows, the AKC needs to register 666,666 puppy mill dogs a year.

Ron Menaker sees nothing wrong with this.

In fact, he himself has bought dogs for sale in Department Store windows. Nothing wrong with it! Good practice! It might get a few people to come to a dog show. And that, of course is the very definition of Kennel Club success.

One of the dirty little secrets of the AKC is that the organization would go bankrupt without puppy mill registration dollars.

In the minutes of the September, 2006 AKC Board meeting (link to PDF file), Ron Menaker notes that the AKC has been registering puppy mill dogs "for the past 122 years" and "we have collected millions of dollars" as a result.

Nothing wrong with it! Good Practice! Or so he says.

Menaker goes on to further observe that "registering puppies that come from these puppy brokers or pet shops" "is not a new phenomenon."

In short, you should "get over it."

Now, Mr. Menaker has gone one step farther. His new message is not "get over it it," but "Get on with it."

Mr. Menaker's threat is that unless the AKC doubles down on puppy mill registrations (the dogs that go to pet stores and department stores), then the AKC might become an American "dinosaur" company that goes out of busines.

Apparently, changing the business model is out of the question. Change?! In Menaker's narrow mind that can never happen. For him and his kind, a closed registry system based on 19th Century eugenics theories is a religion. You do not abandon your religion because it is no longer popular do you? So why would you change Kennel Club practices that leave so many dogs deformed, diseased, and defective that no one respects "the brand" any more?

No, the solution is clearly not change! Better to crank up puppy mill production. Time to green-light more commercial breeding facilities. 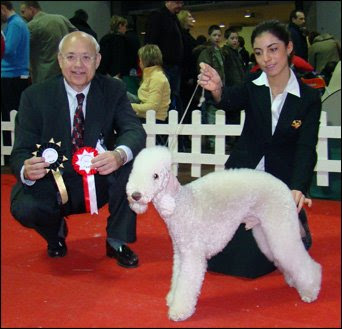 AKC Chairman Ron Menaker with a roach-backed, linty-coated, deep chested Bedlington Terrier -- a good example of what the Kennel Club has done to a dog that was once a working breed.
.

Just to clarify, Menaker is not talking about show entry fees. "To put this in perspective, if this scenario occurred, and we relied solely on raising the event service fees to make up for this revenue shortfall, the fee would be a staggering $20 per entry." He means the service fee per entry the AKC charges the club that gives the show. Shows already charge at least $20 entry fees.

Thanks Nightmare. But it's a pass-thru, right? This is the AKC's cut on the deal? In short, as I read it, because shows are operating at a LOSS, we need to either: 1) Register more dogs (and never mind the circumstances of those registrartions),or; 2) nick dog show owners another $20 a dog at the shows. The bottom line is that Menaker is arguing that puppy mill registrartions need to be increased in order to subsidize shows, right?

Hey I think it would be great if the AKC lost its choke-hold on all breed registries and dog shows. Perhaps then those of us with sexually intact non-AKC registered or registerable dogs would have more venues to compete in!

This is pathetic. It sounds like a corporate welfare whine. I remember a couple of businesses I thought would be around forever, we all do.

Due to mismanagement, poor vision, lack of principles and failure to change, they went out of business. That's why we call them dinosaurs.

Boo hoo. Based on this post alone, they deserve to go out of business.

We're fighting out here in the trenches, trying to get people to stop buying pups from unknown sources and they're not only promoting it but relying on it as their chief source of income? What happened to their holier-than-thou 'hobby' breeders? I guess there aren't enough of them to carry the ball, eh?

You're right, AKC does not make money with shows. Frankly, considering how wretched 'dog show culture' is, I think they ought to charge the twenty bucks and tell the clubs to suck it up. If shows are that important they'll pay the fee. It's more than just losing the commercial breeder registrations that's putting AKC in the hole, though. Many pet pups do not get registered at all. That's money they don't get. People who want a nice pet don't really care about registration papers except to tell them that the pup is purebred. They get a pedigree with their pup, they don't need to register it. AKC has a new program where they will register dogs that go back to AKC registered dogs, even if the dogs are from parents registered with another registry. This is a ploy to get breeders to register their whole litters themselves ($$$), to make sure that 'pet' pups sold without registration are not later registered by AKC. Another big issue is the shrinking fancy. New show people don't stick around for very long. They don't show for long and they don't breed all that much (no money from those registrations.) This is due to the nasty competitiveness of dog show culture. Newcomers don't feel welcome and as the old guard dies off it's not being replaced. AKC has a lot of problems, not just lack of registrations, though that particular problem leads directly to the money thing.

I don't know that you could say AKC wants those registrations to subsidize shows. The club that puts on the show pays all the costs involved like renting the venue, judges, etc., plus a fee to AKC. It doesn't actually cost AKC itself money because AKC doesn't hold shows, the clubs do; AKC just does some of the paperwork. I don't think they are actually realizg much profit from shows. Registrations finance those big salaries for the BoD and the fancy offices.

The AKC itself says it wants more puppy mill registrations to subsidize "events" which includes dog shows. See page 6 of the Sept. 2006 AKC Board report at >> http://www.akc.org/pdfs/about/delegates_meeting/sept06.pdf in which they note:

"At the last Delegates meeting, we
also reported to you some financial
data concerning events. We noted that this area lost approximately ten million dollars in 2005. This year there have been 8,500 events to date, which was up 12 and a half percent from 2005.

"The total number of entries in events so far this year has been 1.8 million, which is two and a half percent above last year.
Based on how the current year is
shaping up, we would anticipate that this year’s loss from events will be comparable to last year. This leaves a great deal to be desired, given the continued
erosion in our registration revenues."

When AKC types pointed and laughed at my working GSDs, took my money and then refused to let me play in their sandbox because I preferred a dog with true function to the abomination that the American GSD has become - I walked away. That was 20 years ago. I haven't missed them.

As far as I'm concerned AKC stands for "A K9 Commodity," nothing more.

AKC doesn't seem to understand that AKC registration doesn't mean very much any more except to show people. Pet people used to want "a dog with papers", but that doesn't matter so much these days, due in large part to show breeders putting out the message that only they have the right to breed purebreds.

Whenever the subject of dog health comes up, AKC says religiously "We are just a registry". The only real solution is for AKC registration to mean something.