Wolfhound and Mastiff Versus Black Bear 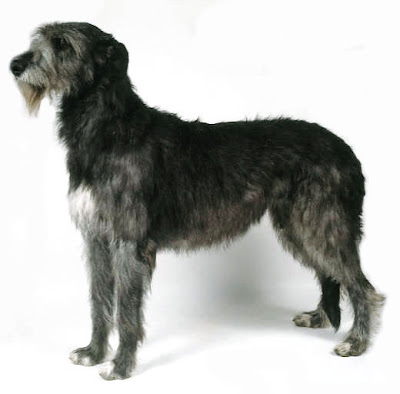 The owners of Irish Wolf Hounds like to drink deeply from the romantic notion that their massive breed was once used to course wolves.

Never mind that there is not a single documented case of that ever happening in Ireland, much less anywhere else on the planet that I can find.

And never mind that when people have needed to get rid of wolves the world over, they have almost never turned to dogs. Poisons, snares, leghold traps, and bullets are far more effective and efficient. That is true now, as it was then.

Is anyone using Irish Wolfhounds to hunt wolves in Alaska, Russia, Europe or the U.S. today? Has anyone ever done so at any time in the last 100 years?

So what happens when romance meets reality in the world of dogs? About what you would expect!

ABC News shows what happens when an Irish Wolfhound and an English Mastiff (together!) are called on to protect their owner from a small black bear.

"I could feel the blood ... the wetness. I could see it dripping, I could hear it wooshing. And the thing that is most vivid to me was watching that little bugger spit my teeth out."

The good news (::cough, cough::) is that the dogs seem to have come out of the ordeal without a scratch. They did nothing but bark and wag their tails!

So much for the power and bravery of the mighty warrior breeds called Irish Wolfhounds and English Mastiffs! No wonder you never find these breeds in lion- and bear-dog packs here in the U.S. It seems they cannot do the job!!
.

Email ThisBlogThis!Share to TwitterShare to FacebookShare to Pinterest
Labels: wolfhound

I don't think that's an English mastiff, though the other is surely an Irish wolfhound.

Dogue de Bordeaux? He seems to have a red nose. Or possibly a huge mixed breed.

The modern Irish wolfhound is a creation of the 19th century romantics. The original dog was extinct in Ireland. Breeders crossed Scottish deerhounds with other breeds to get something that *looked* like the wolfhounds in old tapestries.

For sure, this woman is tougher than her dogs. And there's nothing wrong with that, if that's the kind of dog that you want.

But "barked and created a distraction?"

I've got a 32 pound little farm collie who can do -- and has done -- more, and more effectively, when I've been threatened or attacked.

One wonders -- were they originally called 'wolfhounds' because they just looked like wolves, and not because they ever hunted them? That sounds more plausible to me.

Terriers are routinely used by bear hunters to bust bruins out of the brush. I seriously doubt these dogs are even barking in a threatening manner!

The history of the Wolfhound is very straightforward and not very thick.

The original dogs were overlarge greyhounds, and many did not have the shaggy coats you see today. In fact, the original wolfhound was really just an enormous greyhound lurcher.

Were these dogs ever used to hunt wolves in Ireland? Perhaps, but that was not their true purpose or market value. After all, there were only about 500 wolves in Ireland back in "the good old days," and the Irish killed off their wolves the same as we did ours in the U.S.: a combination of deforestation (mostly to make barrels for whiskey and beer), and traps (pit traps and leghold) and poison.

The job of the old Irish Wolfhound was not to hunt, so much as it was to be paraded. This was a "front of the estate" dog, just like you might have an ornamental longhorn as a "front pasture" bull on a rich man's estate today.

Ireland had a small business exporting these enormous dogs to Italy, England, France, Spain and Germany where they graced estates and wowed the local peasants. If you were trying to "get in" with a rich noble in order to do business or wage peace, no gift was finer or more impressive than a brace of giant Irish Wolfhounds!

Wolfhounds also had a small use in warfare and conquest, as they intimidated natives every bit as much as elephants and armor did. No matter how primitve or illiterate a man or woman, he or she can quickly grasp the maiming potential of a giant dog! Kill a native or two and feed them to the dogs in public, and the "great unwashed" would actually pee on themselves just to see a brace of these giant dogs coming down the road.

The old wolfhounds went extinct, of course. How did that happen?

All extra-large breed dogs are incredibly unhealthy, and the Irish wolfhound is just about the worst of the lot. A wolfhound is typically dead at age 6 or 7 due to heart problems, cancer, or gastric torsion. And that's if the dog survives puppyhood!

Factor in the reality that these large breeds are not to be mated until age 2, and stir in the expensive of ownership in a country in which most people were starving their children, and you can see the very narrow base of ownership. With so few dogs to start with, it did not take much more than a rash of distemper and a little infecundity within a line, to push the dogs over the edge into the abyss.

As said, the modern Irish wolfhound is a recreation (by a Scotsman!) who took bits and pieces of the remnant Scottish deerhound population and crossed it with Great Danes. The resulting modern Irish Wolfhound is, as a general rule, heavier than it should be, and a great deal slower than it needs to be to actually be useful on deer or wolf.

As far as I can make out, the term "wolfhound" has less do with their use in the field, and far more to do with a good way to sell dogs to the gullible. Here was an enormous dog. It LOOKED like it could "take a wolf" and so the dog peddlers named of Rome and Paris, Dublin and York suggested it. And did it work? Well enough!

Some comments on big versus little hunting dogs, from Martin Hunter's "Canadian Wilds" (1907):

"For all kinds of hunting I have found the small dog much preferable to the one of large size. A small dog can readily be put in one's game bag and carried up to the game one is to start. He is lighter and takes up less room in a canoe, the bones and scraps of the camp are sufficient for his support, he will run in and nip at the heels of a moose or deer and get out of the way and repeat his barking, while a big dog would be getting into trouble and endangering his life. . . "

"In hunting bear the small dog has the discretion to keep out of his reach and be contented with barking and running him around. Whereas the bigger dogs are fearless and run in on the quarry generally with fatal results to themselves, for there is no modern pugilist quicker with his fists than a bear with his paw, and let the bear get but one good whack at a dog and that dog is no better thereafter than a dead dog."

Seems the big dogs aren't what they used to be, and small is still beautiful.