In the past, we have featured Pamela Anderson, noting that "every facet of Ms. Anderson's career, body and future depends on animal testing and animal products -- the hair, the fake breasts, the clothes, the lipstick, even her pathetic love life."

We have also mentioned other faded peaches, such as Alicia Silverstone and Pink who seem to have tried to jump-start their sagging careers by "gettin-nekkid" for a cause (or just because).

But, of course, the internet being what it is, it turns out that keeping up with the hypocrisy of PETA spokes-idiots is actually a regular beat of a fun web site called Deceiver.com, where the motto is "Practice what you preach. Or else."

They note that Katherine Heigl, who has been seen running around Hollwyood in a PETA T-shirt, is apparently so clueless that she wore a "fake fur" coat to the Pedigree Adoption Drive in New York.

One possible problem however. It seems not all those high-end fake fur coats are actually fake-fur. Some are made of dog fur.

That's a picture of Heigl, the coat, and a puppy, below. You have to admit the dog on the right and the coat collar do look alarmingly interchangeable. 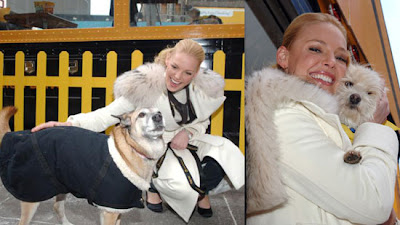 Either way, from a casual inspection I would guess her own body has been been injected with silicione and darted with botox, and then of course there is the rumored "vagino-plasty."

Yes, I thought that was a joke too, but maybe not. Boxers get their noses fixed, and God knows that Ms. Jameson's box has been pounded on more often than any boxer's nose! So who knows?

Ms. Skank-a-lot is whoring for PETA now? Is there no shame?

Considering Ms. Jameson's line of work (cough cough), is there any doubt that her very life depends on animal-tested vaccines and let-us-pray-for-the-cures?

There's more, of course. Much more: Lindsay Lohan sporting a "No Fur" button on her leather coat, and lots of pics of her wearing fur coats everywhere.

Then there is Russell Simon's ex-wife who is a PETA spokes-idiot, never mind her own line of "Baby Phat" clothes made of leather and fur.

Kim Cattrall has no problem lounging around naked in fur (aging stars will do that I am told), but she also claims to be a big PETA fan -- or at least a big fan of the tax write-offs that come when you donate paint-stained fur to PETA so they can claim they are "giving them away to the homeless."

And then, of course, there is PETA spokes-idiot Steve-O of the "Jackass" movie fame who would lecture us all about fur, never mind the video (see it right here) of him swallowing a live fish for fun and profit.

Jackass indeed. A perfect name for PETA, their legal counsel, and their entire leadership team.

That Jamieson person is one scary-looking primate - kind of how I imagine the Barbie doll if she were alive - which of course, based on anatomy, she couldn't be.

Keep it up, man, this is such fun!

We're all fed up with the cult fanatics at Peta (and their kin) - and the dumb-bunny B girls who are Useful Idiots for their agenda of death - er, total animal liberation.

Have you received a letter from PETA yet?
I want a cease and desist(linking) letter just for linking to Blogs that take on PETA.

Notice that 99% of the celebrity Petaphiles are B-listers? I guess they think hitching their wagon to Peta will give their sagging careers a boost.

Think again.
Or even just think, if that's possible.

That picture of Jenna Jameson is downright scary. Talk about an advertisement against the use of plastic surgery.