Obama and Clinton Tied in Texas and Ohio Narrows 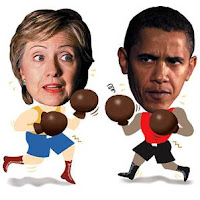 In the survey, released today, 50 percent of likely Democratic primary voters support Clinton as their choice for the party's nominee, with 48 percent supporting Obama. Since the poll has a sampling error of plus or minus 4 percent, the race is a virtual tie with Obama clearly gaining ground. Turnout will be everything.

On Ohio, Hillary had a 17 point lead a week ago, but that has narrowed to just nine points in the latest Survey USA poll.
.
.