Mass Wolf Kills on the Agenda in Idaho 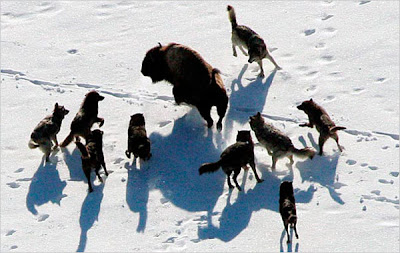 In 1900 there were only 800 bison left in all of the U.S. Today, however, captive bison are so numerous they are sold as supermarket food, and management of wild populations is required to keep herds stable and healthy.


Gray wolves have been listed as endangered since 1974, and a population of 66 animals were reintroduced to Yellowstone National Park and Central Idaho in 1995 and 1996. These animals have since reproduced to a population of 1,500, and as a consequence the Federal Goverment is now moving to delist wolves in three states -- Montana, Wyoming and Idaho.

The ironic thing (and the thing that reveals the politics behind the delisting initiative) is that Idaho, Wyoming and Montana do not have the largest wolf population in the U.S.; that would be Minnesota.

So what makes Idaho, Montana and Wyoming so special that these states get their very own wolf-killing pass?

These folks want the wolves shot, theorizing that wolves represent a threat to their industries.

Of course the real threat to the cattle industry is something else, as the recent recall of 143 million pounds of meat mixed with "downer" cattle reveals.

As for the elk herd populations, they are still larger than the U.S. Fish and Wildlife Service want on the land. Elk over-population remains Topic One when discussing herd management issues in Idaho, Wyoming and Montana.

Taking the wolf off the Endangered Species list does not necessarily mean that it is open season on wolves or that they can be legally hunted. What it does mean is that wolf abatement will be easier for ranchers, and that drunken rednecks who shoot wolves from their trucks will not longer face Federal charges. All three states will now have to develop, and submit, wolf management plans before any wolf killing-culling-hunting initiatives are begun.

Will the wolves manage to thrive anyway? That's the assessment of the U.S. Fish and Wildlife Service which notes that wolves are both smart and fecund.

The deer can't be hunted and they run out of the park and eat everyone's greenery, then go back into the park.

A nice wolf pack would give great tourist interest, make the deer healthier and give plants a fighting chance. Can't get the Feds interested, though. :-(

The problem isn't the lack of wolves, it's the presence of leash laws.

Humans moved into asia tens of thousands of years ago, but never moved out onto the plains of Siberia, because of the hyenas. We could hunt along the edge, but we couldn't settle, because we couldn't deal with the hyenas scavenging the camps at night. Adults were safe, but the kids would be picked off one at a time.

Then we tamed the dog. And immediately moved out onto the plains of siberia and succeeded. Because every human settlement was surrounded by a roving pack of semi-trained, half-wild dogs. They were little threat to the kids, and they kept the hyenas and other noxious scavengers away.

It'd been that way for tens of thousands of years, until very recently.


Now, we have leash laws. Thirty years ago we didn't have geese nesting in town, deer living in town, cougars hunting in town, because we had ten-year-old boys and their dogs exploring every patch of brush and woodlands that these animals could lay up in.

I don't have the stats on this, but you do hear/read about hunting dogs being killed by wolves. This is no doubt more of a problem in densely populated states like Wisconsin.

And, of course, people who leave their dogs outdoors in unfenced areas in wolf country probably have a screw loose.

Hmm ... this post seems unduly harsh on the cattle industry. Yes, sheep and cattle ranches want relief from wolves preying on our livestock, but the real truth is that the federal government requested 10 pairs of wolves in each of the three states in order to reach recovery levels. Of course, we are far past that number and have been for years. Reducing the wolf population is now a state wildlife management issue.
The guys really rearing to go at the wolf hunts are hunters, glad to go after another species for sport.

The push here is from the CATTLE folks.

Idaho hunters have a LOT of things to hunt and eat (including too many elk) and ALL the anti-wolf political power in that state comes from public-lands cattle men.

For the record, the cattle business in Idaho is to run the cattle (private property) on public land in order to make a private profit while demanding a public subsidy.

Now, for the record, I have no problem with shooting *individual* wolves on private property if they are a problem, and I have no problem shooting *individual* problem wolves on National Forest land if they are true stock killers, but the push in Idaho is for as-near-to-wolf-extermination as is possible. It's entirely irrational; it's killing wolves not matter where they are, and no matter what the reason. And it's nuts.

It's just that simple. A lot of folks ALREADY think it's time to end welfare ranching and welfare logging.

And they are not wrong, are they?

One does not have to be a radical to think now is as good a time as any to pry all those "independent free-range cowboys" off of the public tit for good.

And this wolf killing business is the thing that will do it, I assure you.

Cattles get access to public pasture at a cost of $1.35 per cow, per month -- far less than it takes to even manage grazing program, much to less repair the damage to riparian areas that cattle do.

Here are the real U.S. Government numbers and their source: Grazing on public lands brings in $21 million to Uncle Sam, but costs U.S. taxpayers $144 million a year. See >> http://www.gao.gov/new.items/05869.pdf if you want to review all the numbers at the source.

Bottom line: this is a losing business, and the American taxpayer needs to get out of it. Let's put the public back in public lands and tell the ranchers to go and kiss our grits.

Remember, just to break even on public lands, grazing fees would have to increase SEVEN FOLD.

But instead of talking about THAT, we are listening to the steady stream of bullshit shooting out of the mouth of a few dozen ranchers and Idaho Governor Butch Otter.

So let's end it all. Let's end the conflict by ending welfare ranching and welfare shooting outfits on public National Forest land. Want to turn a profit? Fine: pay Uncle Sam the going rate for the same thing on private land.

Quietly-- and I will say more later: the problem with "ending public land ranching" is that it delivers all "deeded land"- the anchor pieces, mostly riparian-- into the hands of developers, who immediately cut it into 50 acre fenced parcels that effectively kill it.

It is not a coincidence that the biggest developer and subdivider in southern Arizona gives money to the anti- public lands grazing Center for Biological Diversity.

I am all for public lands leases with incentives for good stewardship, but first let's charge the folks that want to graze the full market rents for grazing rights. Just to keep up with inflation, the rents would have to increase about four-fold from what they were in the 1980s. If we do that first, then we can pay some incentives in those areas that actually need incentives for riparian area fencing, etc. You do not have to end public land ranching to end WELFARE ranching. They are not necessarily the same thing, and there's nothing lefty about charging folks the market rates -- it's as free market as you can get.

That said paying "good stewardship" incentives for riparian protection, etc. will not change wolf policy in Idaho. The push to kill every wolf is not about science, sense or ranch economics; it's a visceral and irrational primal fear leading to hysteria.