The Missouri Puppy mill featured in the video clip, above, is considered a "Blue Ribbon Kennel," and is part of the Missouri Department of Agriculture's "Elite Puppy Program" which it runs in conjunction with the Missouri Pet Breeder's Association.

The American Kennel Club is a proud platinum member of the Missouri Pet Breeders Association.

This is the part of the AKC that the American Kennel Club does not want you to know about -- that they work hand in hand with the puppy mill industry.

And the AKC's relationship with the pupy mill industry is not a small thing either -- it is a vital part of the Americal Kennel Club's financial operation. It is where the money comes from.

Over at The Canine Chronicle, Gretchen Bernardi has written about her five years of working with the "High Volume Breeders Committee" of the American Kennel Club.

The High Volume Breeders Committee is the AKC's new name for what used to be called a puppy mill.

For those who have not followed the AKC's long involvement in the puppy mill business, here's a quick summary:

In her article, Gretchen Bernardi notes that since 2001, the AKC has not increased the inspection and investigation staff of high volume breeders, and has simply ignored eight of the nine committee members who sought to get the puppy millers to "raise the bar" and change their way of doing business.

Instead of trying to get the puppy mill world to change, the AKC has joined them. The American Kennel Club is now a platinum member of the Missouri Pet Breeders, the very organization which launched the boycott against it back in 2000.

In addition, notes Ms. Bernardi, the AKC has removed the “do not buy puppies from a pet shop” advice from its website.

Andrew Hunte, founder of the Hunte Corporation, the largest commercial puppy mill broker in the U.S. was invited to sit in the AKC box at Westminster.

Then, in 2005, the AKC entered into a contractual arrangement with Petland, the largest outlet for Hunte puppy mill dogs in the U.S.

And, of course, now there is a direct web link from the Hunte Corporation (supplier of pet store dogs) to the AKC's web site.

In August of 2007, the AKC unanimously passed a resolution “to direct management to aggressively pursue the registration of every AKC registerable dog and to actively welcome any breeder or owner who is willing to abide by all AKC rules, regulations, and policies.”

In short, do whatever it takes to make nice with the puppy millers. The AKC needs the money!

Related Posts on this blog:

4 The AKC Embraces the "Big Wink" of Misery Pups
4 Breed Clubs Do Not Run the AKC: Money Does
4 The AKC Signs Contract With Puppy Mill Distributor
4 Inbred Thinking 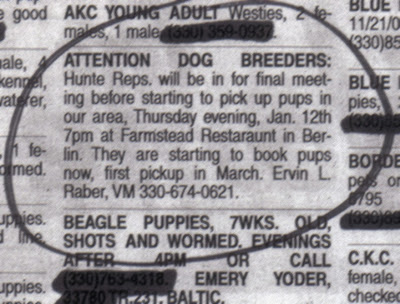 Ervin Raber, the fellow named in the ad above, runs the Buckeye Dog Auction at the Holmes County Amish Flea Market in Walnut Creek, Ohio.

To see where the Buckeye Dog Auction dogs come from, see these pictures of Holmes County dog breeders.

To find out when the next Buckeye Dog Auction is going to be, click here,

Since PUrina and many other pervayors of doggie items and food sponsor the Westminster why couldn't one of the nationaly known animal groups call a boycot of Purina till they stop sponsoring the Westminster dog show. It has really lost its meaning since I found out they are registering puppy mill dogs. The AKC papers are nothing more than bird cage liner

I lost all respect for the AKC after learning of their involvement with the Hunte Corp. Having AKC papers is meaningless. I have three pure breed dogs that I refused to register with them for this same reason.

Don't shop - adopt from a shelter and put the puppy mills out of business. As long as they make money, the animals will continue to suffer. The AKC people must have ice water in their veins!

Unfortunately, simply "adopting from the shelter" won't put a dent in the supply, as much as HSUS and PETA, et al, would like you to believe. Aside from big-scale commercial breeders like this, there are countless irresponsible breeders (see the commercial websites out there for puppies for sale - puppyfind.com, for instance) pumping out puppies for sale - no home check, no health testing, no quesions asked, nada. Stop the SUPPLY, not just clean up after them. Buy ONLY from a RESPONSIBLE breeder and do your research. Don't give your money to so-called "breeders" who produce merely to supply a market, no matter how friendly they are and how they claim to LOOOOVE their dogs....while making money off their backs.

Thank you for posting this. I recently bought a purebred (nonworking) dog, and have been researching everything involved with breeding and the show world. My eyes have really been opened to just how corrupt the entire AKC organization is. It's sad that a hobby that claims to care deeply about dogs is so rife with abuse and greed. I'll never look at it the same way again...

Thank you, thank you, thank you. If I knew where you were right now I'd run over and kiss ya all over!!! I have been saying this for YEARS. Dog World magazine many years ago wrote a series of articles regarding the AKC and none of them were very flattering. I will copy this and give copies to anyone who claims the AKC exists soley for the love of the dog.

Thank you for exposing AKC for what they are. They make people think they are God and the only registry out there thats worth a hoot.

My facility did boycot AKC several years ago along with hundreds of other breeders. Fact of the matter is there are several registries out there that are far better than AKC will ever be. Join the fight to Boycot AKC they support Puppy Mills!

Thank you for exposing AKC for what they are. They make people think they are God and the only registry out there thats worth a hoot.

My facility did boycot AKC several years ago along with hundreds of other breeders. Fact of the matter is there are several registries out there that are far better than AKC will ever be. Join the fight to Boycot AKC they support Puppy Mills!

Wow. wow wow wow. I had no idea that the AKC was so closely involved in the puppy mill trade, although I am not surprised at all. It saddens, angers, and confuses me when I see these puppy stores in the malls wither dogs that I am certain came from these terrible places. Thank you for posting this blog, I hope many people see it and realize what they are supporting when they are supporting the AKC.