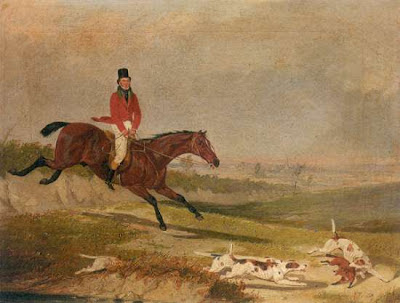 The picture, above, is by painter Sawrey Gilpin who was born in Cumbria in 1722, and died in 1803, some years before the Reverend John Russell ever acquired his famous first terrier, Trump. Gilpin was a painter that specialized in painting animals, particularly horses, cattle and dogs.

I bring this up, not only to show that riding hounds to fox was already being practiced, but to point out the little dog, to the right, that is featured in another Gilpin painting.

The dog in this picture is a terrier by the name of "Pitch," who was owned by Colonel Thornton.

The painting was done in 1790, and you will note that this is the very model of the (undocked) white fox-working terrier we know today as the Jack Russell Terrier, complete with spot above the tail end and split-head markings.

As I noted in a post written some time ago, white fox-working terriers predate the Reverend John Russell, who seemed to have no problem finding another one, of suitable type, to mate with Trump.

These dogs are quite a bit bigger than JRT's or Fox terriers, and they are undocked.

And they are run in small packs.

Where have I seen this before?

The larger size of the feist fits that definition. My neighbor had one that could pass for the dog in the lower photo, just she had black and tan markings (tricolor).

Feists superficially look like JRT's. The rat terrier is some relation to them, and like the rat terrier, they tend to get along with other dogs much better.

These dogs and rat terriers that are used for work vary greatly in appearance. I knew a small rat terrier that was UKC registered and worked as as squirrel dog that could have easily passed for a toy Manchester. She had the Italian greyhound build, and she had a whip-like undocked tail. And she even had the "candle-flame" ears!

Where I live it is very uncommon for feists and rat terriers to be docked. And when JRT's began showing up in regular numbers, people wondered why they cut the tails off their little feists.