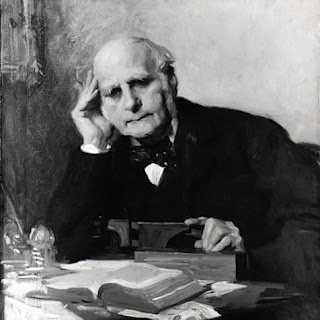 The work of Francis Galton was important to the development of the breeding theories that underpin the closed registry system of The U.K. Kennel Club and its U.S. analog, the American Kennel Club.

As a diversion, I looked up Francis Galton's 1865 essay on "Hereditary Talent and Character," in which he suggests that the dogs that people like best are are the stupid ones that most readily make themselves available to us as "slaves."

"So far as I am aware, no animals have ever been bred for general intelligence. Special aptitudes are thoroughly controlled by the breeder. He breeds dogs that point that retrieve, that fondle, or that bite; but no one has ever yet attempted to breed for high general intellect, irrespective of all other qualities. It would be a most interesting subject for an attempt. We hear constantly of prodigies of dogs, whose very intelligence makes them of little value as slaves. When they are wanted, they are apt to be absent on their own errands. They are too critical of their master's conduct. For instance, an intelligent dog shows marked contempt for an unsuccessful sportsman. He will follow nobody along a road that leads on a well-known tedious errand. He does not readily forgive a man who wounds his self-esteem. He is often a dexterous thief and a sad hypocrite. For these reasons an over-intelligent dog is not an object of particular desire, and therefore, I suppose, no one has ever thought of encouraging a breed of wise dogs. But it would be a most interesting occupation for a country philosopher to pick up the cleverest dogs he could hear of, and mate them together, generation after generation -- breeding purely for intellectual power, and disregarding shape, size, and every other quality."

It's not too hard to see how H.G. Wells could imagine the human race evolving into a race of "Eloi" and Morlocks" is it?

Of course, the idea of controlled breeding of both humans and animals predates Galton.

Plato, for example, said that "The best men must have intercourse with the best women as frequently as possible, and the opposite is true of the very inferior."

As I note in American Working Terriers, Robert Bakewell is the person who popularized the control of sires to improve farm stock.

It was Galton's eugenics thesis, however, that set the intelligentsia of Victorian England on fire.

What the Kennel Club proposed in 1873 was simply a logical extension of Galton's work: to remove natural selection from the table completely. What better place to begin with than the dog? Dog breeds, after all, are not a product of natural selection, but of unnatural selection. A "natural" dog is a mongrel. A working dog, however, is a dog that has been selected for certain attributes. Since some selection for defined characteristics had already begun with working dogs, why not start with those breeds and see how they would work out with further "refinement" in a closed registry?

For more on the not-entirely-successful theories of Francis Galton (and for the ironic story of what happened to the Galton/Darwin gene pool), see my earlier post on Inbred Thinking.