As Predicted: Fools Get Stung at Irish Honey Pot 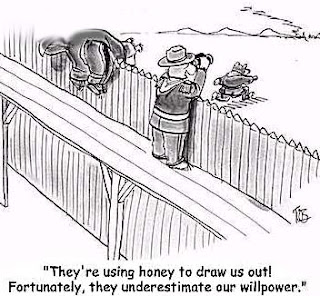 Six weeks back or so, I wrote a post called Honey Pots and Trolls in the Land of Eire, in which I wondered whether an Internet troll that had shown up on two working terrier boards in the U.K. was really nothing more than a "sock-puppet" for a police sting operation. I wondered why anyone else would show up and talk a bunch of sh*t about badger baiting trials that were outlawed in Ireland nearly 40 years ago? I wrote:

Well, it could be a simple matter of another Internet Troll on the boards. Such people are common enough, and I have written about them before.

But perhaps in this case it is something else. Think about it -- a person with an anonymous name shows up less than a year ago on a working terrier board, and now he wants to talk about badger baiting in a country where that practice is quite illegal?

Hmmmm. Sounds like a honey pot operation to me.

What's a honey pot? A honey pot is an old trick. You put down bait (preferably under cover of dark) and then stand back and shoot anything that comes in to feed on it.

I have written before about how these Internet bulletin boards might be a problem in this regard, and more people should probably be aware of how these honey pot schemes work if they want to stand clear of real trouble themselves, especially in the U.K.

I concluded that: "A word to the wise in this regard should be sufficient."

But of course, the wise are few and far between, aren't they?

In any case, it turns out that I was probably right. The BBC has just put out a big documentary-expose on dog fighting in Ireland, and apparently this thing has been in production for 17 months or so, with some bald-headed poseur showing up at the dog shows, and even trading dogs.

Hmmm. Could this be our Internet troll, or an associate of his? I would bet.

Now the working terrier boards in the U.K. are all a twitter. They still have not figured out where they went wrong. Read my originial post, however, and see what was predicted six weeks ago.

The spoor was obvious to me, and so too was the scent. When you see such things, just sit down and keep quiet -- the game will reveal itself in time.

The funny thing is that genuine digging folks know the score, and have nothing to fear. We aren't going out to bait animals, we are going out to hunt.

And we sure as hell aren't using turnspit dogs or fighting dogs to get the job done, are we?

We are using terriers, yes, but the terriers used in Ireland to hunt are the same as those used all over -- Jack Russells, Patterdales, Fells and (perhaps) a few Borders. There is no shame or artifice in the world of true working terriers who are being worked by folks who actually know what they are doing.

And the job being done is not complex, is it? It's to locate and terminate the quarry, as quickly and painlessly as possible, and to shepherd the safety of the terrier so it can be used again next week.

Personally, I am not saddened at all to see the fighting dog-crowd cleared out. Dog fighting has nothing to do with hunting -- a point I have made repeatedly. Of course if you are living a rich fantasy life on the Internet, perhaps it's all the same.
.

But of course, the wise are few and far between, aren't they?

We had to laugh. A husky looks a little like a German shepherd, but it's a sled dog, not a guard dog. Bella's not very strong and can't stand the cold.

She has some similarities to an English setter but not the white coat speckled with black or brown spots. And a Yorkie? Come on! They're tiny dogs with long hair, usually tan and black. Where did Bella's thick, black coat come from if not a Lab.
(...)

that bee baby picture really creeps me out. I know its only a doll but..... eeeek

i've been avoiding your blog because of it, how about a change?

But I did swap out the picture :)

The no-nothing trolls on the boards kill them. The fellow you mention has never sent you an email, has he? Never posted a picture of his own dogs working either so far as I can tell, but he throws shit with a JCB. Another fucking pretender. Keep up this site -- a breath of fresh air and a welcome relief. - David