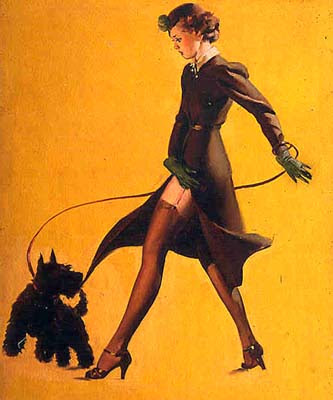 A blog repost from August 2007.
The Irish Setter is not the first working dog to go down the drain at the Kennel Club as its members pursue green cash and blue ribbons.

The Fox Terrier swirled down the pipe around the turn of the Twentieth Century, and the Kennel Club is happily skipping down that same road with the "Parson Russell Terrier" -- the largely nonworking version of the Jack Russell Terrier.

A similar track record can be found for the Bedlington Terrier, which was once found in the field, but can now best be described as "once rumored to work."

The Sealyham Terrier has been trundled down the road to oblivion as well, and the Border Terrier has three paws and its muzzle in the grave as far as honest field work is concerned.

What's interesting with both the setters and the terriers is that while these two types of dogs are very different from each other in both appearance and the nature of the work, the same Kennel Club forces are at work, and the impact is largely the same.

For example both working setters and working terriers are smaller than their show-ring pretenders. Why is that?

And why do both working terriers and working setters have shorter coats than their hot-house cousins?

The story, I suppose, is that since you cannot judge nose, gameness, or bidability in the ring, Kennel Club judges (who may have never worked a dog a day in their life) tend to gravitate towards the most obvious visual traits presented by a dog -- size and hair.

Never mind that these things have no relation to work or, in the case of terrier size, a certain inverse relationship.

Looks are all that are important in the Kennel Club.

In this sense, it's just like the Miss America Pageant. Miss Oklahoma may be a classical piano-playing, Stanford-educated PhD metallurgist for NASA who can fire a rifle, ride a horse, and quote Hemingway while drywalling the kitchen ceiling, but when push comes to shove she will lose to Miss Mississippi who has big tits, big teeth, and big piles of blond hair. Never mind this same woman has the IQ of a toaster oven.

But then, I'm missing it, aren't I? When these folks are looking for is not to hire a worker.

What they are looking for is a trophy.

They're looking for the canine equivalent of a trophy wife.

Who cares if she is a bimbo with the brains of a butterfly and the personality of a Harpy Eagle?

Who cares if she is expensive to maintain, does not work, and is a poor parent to boot?

Who cares if those over-filled silicone sacks are a cancer bomb waiting to go off? 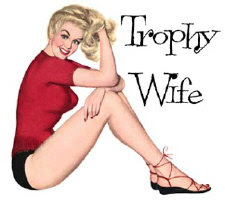 The job of the trophy wife is not long term; it's to look good parading at your side for a few years. If she gets sick, or becomes a bore or a chore, well she was always a "temp job" from the beginning, right?

A temp job. Just like all those show dogs that are available at "kennel reduction" sales after they have been milked for puppies and ribbons.

Kick 'em to the curb and let's get us another one. Yassuh!


And this time, let's get one with REALLY big tits, big teeth and really blond hair.

Oh my Goodness. That might possibly be the best analogy for show dogs I have ever heard.

I might not breed working dogs, but even I've become disillusioned with what's being prized in my breed's show ring. Dogs with obvious breathing issues and crippled movement win - over healthy dogs - because they have 'bigger' heads. Dogs with backs so short that they cannot free whelp.

I've come to the conclusion that, with the way things are going, I can breed healthier dogs, or I can breed show dogs - but I can't have both.

Not a tough call which one wins, really.

Spaniels, and terriers - how about the collies? They also seem to have gone through the same process.

As the JRT is to the Fox Terrier, is as the Border Collie to the Standard Collie.

And it's not just the working dogs that are being ruined. The extended kennel club campaign against "backyard breeders" is doing the same to the family pet.

Used to be, folks who wanted a pet would get one from the litter of a neighbor's pet. The bloodline may not have been scientifically researched, or pedigrees kept. But there was a selection in place, favoring the descendants of dogs who'd been successful pets.

We have very little of that, these days, in many areas of the country. The spay&neuter campaign has been too successful.

* Purebred show breed, which are likely to be high-maintenance, and not infrequently psychotic

* Working strain, usually too high-energy and high-drive to make a successful pet

* Rescues, which have already failed at least once as a pet

I really think the AKC is taking all breeds to hell in a hand basket. I'm thinking that soon the American cocker spaniel will look nothing like what it originated... heck I'm not even sure why it's still in the sporting group since I'm pretty sure nary a dog works in the field. They should truly be moved to nonsporting along with the other dogs that once had a purpose.

The AKC is such a rubbish organization.

Re Jedge's comment about rescues.
Not all failed as pets, many were abandoned by owners through no fault of the dog. The owners failed the dog.

Completely agree HTTRainer -- I have often said that people fail dogs FAR more often than dogs fail people. In fact, the failure often starts right at the begining, when the human thought it wanted a dog, when it really wanted a puppy, and what it needed was a cat.

There was a rich old bastard who knew that he didn't have long left to live. He summoned his three favorite girlfriends; a blond with a PhD in economics, a brunete with a masters in fine arts and a redheaded neurosurgeon. He told them the bad news, that he was not long for this world and then gave each of them $1 million in cash and told them to come back in a week and tell him what they did with the money. He would then determine wich one to marry.

A week later he summoned them up and when they stood before him he asked the blonde, "what do you have left of the money I gave you my darling"? "Well my dear, you would have been proud. I just went wild and bet it all on Zenyatta's 20th race." The Brunette stepped up and said "there was an amazing IPO upon which I risked it all and within the week had doubled its share price." The redhead said "I diversified the portfolio into stocks and bonds, still have 1% liquidity, and bought some rental properties in Miami."

Well my little pretties. You have indeed made me proud and I must make a decision based on the important human factors which will perpetuate the species."


Which girl do you think he married?

The one with the biggest tits.

A lot of show breeders will say that their dogs aren't just pretty--they also breed for temperament and health, AND their dogs "can still do what they were bred to do." LOL