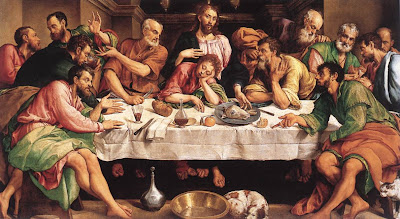 The centerpiece to this table is not tofu.


A hat tip to Steve Bodio who alerted me to the fact that the self-aggrandizing lunatics at PETA have put models of Jesus, Paul McCartney (as Sergeant Pepper), Ghandi and others in a cage in the side of an Airstream trailer that has been made up to look like a diner (a reference to the Last Supper I suppose). The story is up at Maine Hunting Today.

All this does is prove that the folks at PETA have not only never read the Bible, they really did ride the short bus to get to school.

Say what you want about Jesus, but he was a Jew, and as such was raised in a world in which the Torah -- the most sacred book of God -- was not only made of animal skin, but wrapped in animal skins as well. His was a world of sheep and goats, camels and donkeys, horses, and mules. Sheep and goats were routinely sacrificed and eaten, just as they are today. Larger pack animals were used to the very edge of their miserable existence, and then they were killed and skinned for water bags, saddles, drums, shoes, bags, and cord -- just as they are today. In much of the Middle East, little has changed in 2,000 years, and I assure you that there is no notion of Animal Rights at all.

In both the Old and New Testaments, animals do not have rights, and in fact on at least one day every year -- during the Passover sacrifice -- practicing Jews always had to eat meat as it was part of the traditional meal. In fact, while the Bible is not quite a recipe book, it does have instructions. In Deuteronomy 14 we are told:

"These are the animals you may eat: the ox, the sheep, the goat, the red deer, the gazelle, the roe deer, the ibex, the addax, the oryx, and the mountain sheep. Any animal that has hoofs you may eat, provided it is cloven-footed and chews the cud.... "Of the various creatures that live in the water, whatever has both fins and scales you may eat...You may eat all clean birds. "

Jesus was born in a manger -- a place where beasts of burden and service are housed.

The story in the New Testament is not of loaves and Tofu, but of loaves and fishes, and it was fish -- a living thing -- that was killed and which Jesus fed to his followers.

In Mark 7:19 Jesus says all meat is now OK to eat (a major legal difference between the Old and New Testaments), and in Luke 22:8-15, Jesus intructs his followers to prepare lamb for the Last Supper.

Add to this the story in Samuel where the fox's tail is set on fire to help torch the fields of the Philistines (made famous in the Rudyard Kipling poem, "The Fox Meditates"), the Old Testament tales of frogs falling from the sky (not a good day for the frogs, I suspect), and the wholesale drowning of animals (see the Great Flood in Genesis and the un-parting of the Red Sea in Exodus), and it's clear that God is not a PETA member.

We have more direct evidence, of course.

If God made man in his own image, as the Bible says, then God has canine teeth.

Try to reconcile that with vegetarianism.

God did not make man alone, of course. He also made spiders which bind up living things, inject them with poison, and then eat them eat them alive, one piece at a time.

God made the hawk which will rip the head off a fluttering sparrow still grasped in its claw.

God made the fox which will chew the hind legs off a living mouse so that the flapping rodent can serve as a toy for its kits.

In short, God made nature, red in tooth and claw, and I assure you it is not all a mistake.

I love today's blog! You are SO right! Here is MY favorite Bible quote:
"The righteous man hath regard for the life of his beast; But the tender mercies of the wicked are cruel", Proverbs, 12:10.
I like this one because it says that we may own beasts, and it describes the proper attitude of an owner towards "his" beast, namely, that we have regard for the life and well-being of what is ours. However, it points out that the "wicked" show their "tender mercies" in a way which is indeed cruel. This describes PeTA, sending it's workers out on "mercy missions" to seek out animal victims to TAKE their lives, needlessly, and without regard to the right of that animal to live a full life. Yes, I believe that they are wicked, whereas most animal owners have concern for their animals and show their righteousness in God's eyes by how they treat the "dumb" (voiceless) creatures. In the old days that I remember, someone who did not care for their animals was despised. There was no law against neglecting an animal, in many cases, but the man or woman who neglected his / her animals was a social pariah. That proved to be enough to keep most people on the straight and narrow. But then, most people wanted to keep animals out of decent, traditional interests. That was enough for us, back then. I remember that Roy Rogers taught the kids to observe "the cowboy way". That was to feed your animals before you sat down to eat your own supper. I'd sure rather listen to Roy Rogers' advice than some tofu-eating punk! I miss the old days.

For a comprehensive look at PETA's twisted views on religions, see "Holy Cows" -- a report by the Center for Consumer Freedom. It can be downloaded, free of charge, at http://www.consumerfreedom.com/downloads/pro/docs/050801_PetaReligion.pdf

Jesus said "Look at the birds of the air; they do not sow or reap or store away in barns, and yet your heavenly Father feeds them. Are you not much more valuable than they?" (Matt 6).

And Luke 12 records: “Whatever I tell you in the dark, speak in the light; and what you hear in the ear, preach on the housetops. And do not fear those who kill the body but cannot kill the soul. But rather fear Him who is able to destroy both soul and body in hell. Are not two sparrows sold for a copper coin? And not one of them falls to the ground apart from your Father’s will. But the very hairs of your head are all numbered. Do not fear therefore; you are of more value than many sparrows."