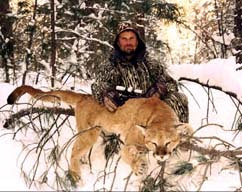 Today, across the United States, the black bear population approaches 500,000, while the cougar (mountain lion) population is over 30,000.

Coyotes are now found everywhere -- from the suburbs of Los Angeles to the South Bronx.

Alligators are so common in Florida and many other southern states that it is hard to imagine they were teetering on the edge of extinction just 40 years ago.

While Wyoming, Montana and Idaho are estimated to have had only 1 wolf between them in 1980, imports from Canada helped that number climb to 33 in 1990. By 2000, the three states counted 437 wolves between them, and by 2005, that number had climbed to 1,020. The wolf population of Minnesota, Wisconsin and Michigan is now estimated at about 4,000 animals, with about 2,600 of this population in Minnesota. In Arizona and New Mexico, the Mexican Gray Wolf has been reintroduced from captivity, and the total population in those two states now numbers between 30 and 50 inviduals.

The New York Times reports that the grizzly bear population of the Yellowstone Basin is now about 600 animals -- the most it can hold -- and that the population of these enormous bears is growing at about 5 percent a year -- a doubling time of about 12 years. While there are a few grizzlies in the Yaak, most of Idaho remains griizzly-free for now, but it is only a matter of time before that changes as Idaho's National Forest system offers plenty of excellent habitat to absorb expanding populations.

The growth of large predators means that in the not-very-distant future man is going to have to re-examine its relationship with its wild competition. While black bears are fairly docile herbivores, and coyotes are small enough that they pose no serious problem to an animal larger than a cat or a terrier, cougars, wolves and grizzly bears are top-end predators, and they live on prey quite a bit larger than mice and cats.

Should we kill a cougar, wolf or grizzly because it kills a sheep or cow grazing on national forest land? Not in my book, but I am willing to debate the issue and discuss the competing values and costs. I am confident that in such a debate the cow and sheep will lose, and the lion, wolf and grizzly will win. Am I willing to shoot a mountain lion to protect populations of seriously endangered desert bighorn sheep? Perhaps, but shooting may not be the only option in an era in which we have modern and safe leghold snares, traps and dart guns which give us the option of relocating animals to areas of true wilderness. I am not (yet) of the opinion that we have a longage of mountain lions or grizzly bears.

When push comes to shove, however, we are going to get to a place in the next 20 years or so when conservation and preservation of predator species is going to be less of a concern than sensible management.

This will be a good thing, beause it will mean that we have a viable top-end predator population in the United States again. Unlike Europe, our wild will not be an emasculated place, but a countyside with gradients of wild, wilder and wilderness. Or, as one movie hero remarked, "The closer you get to Canada, the more things'll eat your horse."

I bring this up the wake of a recent cougar attack on two elderly walkers in California. The good news is that both Jim and Nell Hamm survived. The day after the attack, trackers with hounds shot and killed a female and a male mountain lion within a quarter mile of where the attack had occured.

I am not second-guessing the removal of those mountain lions; no sensible person would. That said, it does take you down the path to risk analysis and response. A 70-year old man, like Mr. Hamm, is far more likely to die from cholesterol-choking cheese, a car accident, or alcohol poisoning than from a cougar attack, and yet we do not ban these products -- we heavily promote them.

Cougar, wolf and grizzly bears are inherently dangerous animals -- they will attack and kill you under certain circumstances. That said, those circumstances are sufficiently rare that it is very clear that it does not take too much effort to tip the scale to the point that the lion, bear or wolf thinks better of the arrangement. You can do things to reduce attack, and you can take precautions. At at some point, I think, we need to talk about human responsibility and assumed risk.

The point is that similar steps can dramatically reduce your risk in cougar, bear and wolf country, and those steps are not particularly onerous. Carry a walking stick and wear a hat and know the value and use of both. Do not engage in long-distance running or biking on brushy slopes in cougar country, and pack your food and pans away from your tents, and up a tree, in bear country.

Above all, however, realize that the chance of attack is extremely remote and that your odds of attack can be reduced to near-zero by taking a few common-sense precautions.

You cannot teach a wolf or cougar to be a vegetarian, but you can teach humans a few common sense tips that dramatically reduce the risk of attack.

Finally, remmeber this: When you are in the woods, you are far more likely to be killed by a swarm of bees, a falling tree, or a lightning bolt than you are by a bear, lion or wolf. If you want to live in fear, live in fear of bees.