You Gotta Break Some Eggs to Build a Movement 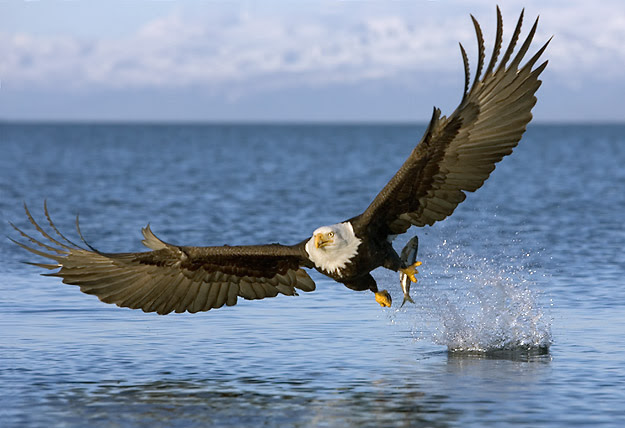 As we approach Christmas, I'm reminded that it's also time for the National Audubon Society's "Christmas Bird Count," which Audubon describes as "the oldest and largest citizen science event in the world."

What's fascinating about the Christmas bird count is that Audubon's own "citizen science" data does not support one of Audubon's core stories: that a decline in Bald Eagles and Oprey populations in the U.S. was due to DDT.

In fact, DDT did not kill off the Bald Eagle -- lead poisoning did, in the form of bullets shot from rifles.

The short story here is a common one in American wildlife: as guns became more accurate, cheaper and more powerful between 1850 and 1900, game laws did not keep up.

The result was a true wildlife massacre. We not only shot out all of the buffalo that once grazed on the East Coast, we also shot out all the passenger pigeons, Canada geese, beaver, elk, wolves, deer, mountain lions and -- yes -- eagles, osprey and large numbers of hawks as well.

Eagles, osprey and hawks were also decimated by the use of pole traps -- leghold traps set on the top of poles placed around fishing nets and barn yards. Nothing kills hawks and eagles faster, or more efficiently, than a pole trap.

Native Americans did their fair share of shooting of eagles too. It takes a lot of feathers to make a "war bonnet" for the tourist trade, and there was no shortage of demand for such things by museums, collectors, and wealthy tourist patrons. 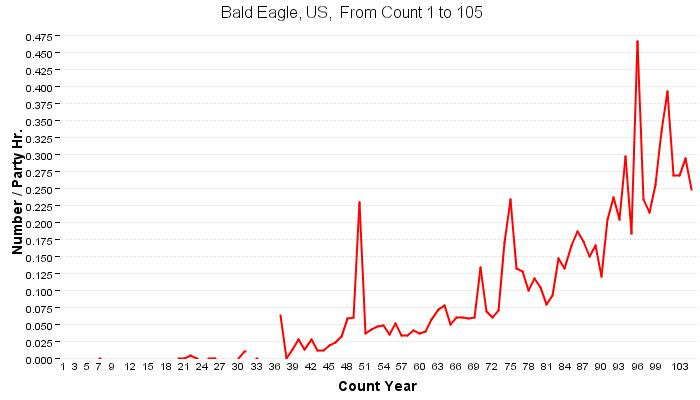 The graph above (click here to see full-sized graph) shows Bald Eagle populations as tracked by the National Audubon Society's Christmas Bird Count, which has tracked bird populations in the U.S. since 1900.

As you can see, by 1900 -- more than 40 years before DDT was invented -- Bald Eagle populations were vanishingly low. The same story is true for the Osprey -- another bird unlikely to be misidentified by a dedicated bird watcher participating in the National Audubon Society's Christmas Bird Count. As with Bald Eagles, Osprey were hammered by guns and pole traps, but large numbers were also killed when they collided with pound nets set in coastal fishing areas such as the Chesapeake Bay.

Ironically, Bald Eagle populations climbed between 1940 and 1970, when DDT was in full use in the U.S. The reason for this is fairly simple: the Bald Eagle Protection Act of 1940 made it illegal to shoot Bald Eagles. This protection was further expanded when the Endangered Species Act was passed in 1973.

Left to their own devices, and protected from unregulated shooting and trapping, Bald Eagle populations took flight and have now soared. Today, there are about about 8,00 nesting pairs of Bald Eagles in the Lower Forty-Eight, and the Bald Eagle is now now a candidate for de-listing from the Endangered Species Act.

Another American success story. Add that to the rostrum of success we have achieved through a marriage between hunters and conservationists: the return of the white tail deer, moose, elk, cougar, beaver, Canadian geese, wood ducks, and wolves.

For the record, and to be clear, I am NOT saying DDT did no harm to bird populations. Nor am I saying that DDT should be legalized. A ban on DDT was a good thing, and helped many bird populations rebound.

Is their evil intent here? Is it all a big conspiracy? Not exactly.

What happened was that the push to ban DDT in the late 1960s and early 1970s happened to coincide with the rise of computerized direct mail lists. Direct mail requires organizations to have recent victories, and the ban on DDT was a convenient example that could be trotted out by executives across the environmental movement. What was doubly delicious for direct mail copy writers was the opportunity to link the salvation of an icon -- the Bald Eagle -- with the organization's recent political success.

And it worked. In 1969, the National Audubon Society claimed a membership of 88,000, but just 10 years later its membership had risen to over 330,000, due in no small part to victories touted in a massive direct mail campaign.

Did Audubon and the Sierra Club do anything wrong by growing their membership using truncated and not--quite-complete stories? Not really.

Let's face it, you cannot squeeze all of the truth in this great world into a four page direct mail letter. And without that letter, not only would people not join movements, they would not become activated or motivated to learn more. The natural state of man, I am afraid to say, is prone before a television set.

The totality of what has come out of those direct mail campaigns is a true wonder -- massive amounts of land protection, cleaner air, cleaner water, the return of endangered species, and decreases in such once-common toxins as PCBs and lead.

When my grandfather was born, almost all the wildlife had been shot out, the air was black, and the rivers were dead.

Things were not too much better in 1970. It always shocks people when I tell them that we imported deer into parts of Virginia as late as 1965. Today, the "deer problem," in this state is that we have too many of them.

I am not a fan of the too-simple truths of direct mail, but I am not so naive that I do not think they have their place. So when people tell me that DDT wiped out the Bald Eagle, I tend to smile and nod.

Sometimes a simple fable is more powerful than a complicated truth.
____________

For anyone that wants to play with Christmas Bird Count data, see >> http://audubon2.org/birds/cbc/hr/table.html