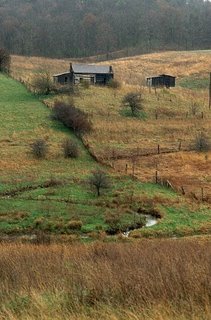 The Fauquier Times Democrat (Virginia) has a piece on the huntsman for the Piedmont Foxhounds who compares Fauquier County, Virginia to Shropshire in the English Midlands on the Welsh border.

One of the most famous terriermen of all times was from Shropshire of course -- the late great Bert Gripton.

The Masters of Foxhounds Association of America is located in Millwood, Virginia.

UPPERVILLE - Richard Roberts steps atop a low flat rock at the center of the grassy pasture. A perfect perch. Relaxing in the warm September sun, he lets the long leather thong of his hunt whip flop casually: curled around his right fist that lightly holds a sturdy hunt crop, the whip beats a rhythm: "flap, flap, flap" against one thigh as he gazes at the three dozen cavorting foxhounds below. They gambol about the meadow, bowling each other over in their enthusiasm, occasionally stopping to lift their eyes to Roberts for approval - and their legs on the fenceposts - before pawing in the lush grass, others flopping in a nearby puddle for a morning splash.

"C'mon-n-n-n-n, boy-y-y-y-s-s-s-s." Roberts draws out both words, pitch rising at the end, thick English accent tucked deftly under the universal language of the dog. "C'me along. C'mon-n-n-n-n." Flap, flap. Roberts taps his thigh to get everybody's attention as he turns to walk up the hill. The pulsing group of hounds bounds ahead. Roberts smiles.

Though he's been in America barely two years, 33-year-old Roberts says he feels strangely at home in Virginia's Piedmont. He says he felt it from the start.

"It's a lot like home," Roberts said, comparing his native Shropshire in the English Midlands on the Welsh border. Growing up hunting the rural, rolling farmland gave him a taste for open country and sport with horse and hound. As new huntsman for the Piedmont Foxhounds, Roberts says he finds Virginia's hunt country - in particular Piedmont's of northern Fauquier and southwest Loudoun - much like England.

"Look, over there. See that hedgerow?" He waves toward a honeysuckle-covered fencerow - probably a rusted American wire to pped with sagging barbed wire holding up the tangle of weedy growth - lining the field where the hounds frolic "at walk," Roberts' term for morning exercise. "I call that 'Piedmont hedge.' All bramble and briar. Just like at home. Those type hedges are all over."

Roberts takes the reins from outgoing Piedmont huntsman Butch Gray, who he whipped in to last season. "The hounds had to get used to me not being a whip," Roberts said, explaining that a pack of highly trained hunting hounds looks to the whip, or assistant to the huntsman, for guidance and direction when out hunting, but that they see the huntsman as their true master. "They had to learn to look at me as huntsman. But the transition was pretty seamless."

New Piedmont whipper-in Spencer Allen feels that Roberts' voice has a lot to do with the easy switch. "Hunting behind Richard has shown me a lot of the particulars and finesse" of handling a forward thrusting, highly tuned pack of hounds. Allen filled the vac ant whip's position left open when Roberts stepped into Gray's shoes for the 2006-'07 season. "I love working in an 'English-run' kennels. I want to be a huntsman someday, and I really like learning from Richard. The hounds respect him. You can see he knows their language."

Roberts learned the language of hounds and hunting growing up on the family farm in rural Shropshire, England. When not following hounds, he, along with four sisters (three older, one younger) helped their father tend the family's cattle and sheep and "a bit of arable" cropland. In addition to farming, the senior Roberts trained a few hunter 'chasers and occasionally whipped in to the local South Shropshire Hunt.

"All I wanted to do was go hunting," Roberts said, smiling as he recalled his youth. "I remember being a little squat of a kid, doting on (South Shropshire huntsman) Michael Rowson when he'd come into our house after a day's hunting. He was a grand old chara cter, with an old-fashioned huntsman's voice. A booming voice. He always promoted kids' hunting, though, and he sometimes invited me to come up front with him.

"I remember one day he sent me to the far side of a covert to holler if the fox went away. Dammit if Charlie didn't pop out right there! Well, I pushed the fox back in (accidentally) and of course Michael wasn't very happy and gave me a dressing down. I was meant to let the fox go on. That was my first telling off by a huntsman. Oh, golly, I still remember it."

Steeplechasing evolved as another of Roberts' passions. Even when his father died when he was just 15 and they sold the family farm, Roberts continued to pursue a life in racing.

He earned an equine degree from Walford College of Agriculture in Shropshire, and exercised jumpers, hoping to make race riding a career.

"I had a schoolmaster," Roberts said, recalling the talented and experienced hunter 'chaser he point-to-pointed. "But it was al ways a struggle with weight." Featherweights assigned to young or inexperienced horses beginning jockeys are often assigned to ride did not suit Roberts' 5 foot, 8 inch frame. Reluctantly, he gave up the jockey dream.

After a brief stint in forestry, Roberts found his way back into horses via the bloodstock industry, prepping yearlings for the blue-blooded Doncaster and Newmarket sales while learning from fellow foxhunter and bloodstock agent Robert Purcellville.

"He told me that was the road I should take," selling bloodstock, Roberts said.

Breeding sales were over for the year, 1996, and one day Roberts was casually flipping through "Horse and Hound" - a weekly magazine that is the English standard for equestrian news. "I saw an ad for kennelman-second whip for a hunt in Cheshire."

And, just like that, he was off and running.

"I loved it," Roberts said of the open, galloping terrain of the Berkeley. There, small farm holdings were criss-crossed with hedgerows much like established Piedmont farmland. "It was lovely grass country."

After five years, Roberts said he was ready to move on, but his wanderlust collided with the "hunting with hounds" ban in Britain. Parliament outlawed all hunting with hounds, including, naturally, foxhunting, in 2004; the ban took effect in February, 2005.

"I was at the point that I wanted to move up to huntsman, but I wanted to fox hunt, not drag hunt," one of few forms of hunting - one without live quarry -- that remained legal under the new code.

"People had said 'what about the U.S.?" Roberts said. "So I rang up a few people and was on a plane to Virgi nia" to take an open slot as first whip to the Piedmont.

Roberts hunted behind Gray last season, fall 2005 through spring 2006, taking over the huntsman's position when Gray decided to retire from hunt service to work with show hunters.

"Butch built a nice pack of hounds" at Piedmont, one of Virginia's oldest packs, Roberts said. "I hope I can carry it on."

"There's a ton of tradition here," Roberts said. "It's a lot like hunting at home, but with an American flavor. At home in England we catch more foxes, but the countryside and the sport is the same. Even the hounds are the same." Piedmont hunts a primarily Crossbred pack, with a few pure English hounds mixed in. "I've got to adapt to the American way, but hones tly, we provide the same sport."

Part of the English way Roberts has brought to Piedmont is the distinctive use of voice when cheering his hounds. Many huntsman rely more on the small, brass hunting horn to communicate to the hounds; others use primarily voice. Others combine the two.

"It's different hunting with an English huntsman," said whipper-in Spencer Allen, who previously worked for American-born Greg Schwartz and Billy Frederick at Bull Run. "Richard brings a lot of the English formality with him. It's all in his voice."

For his part, Roberts does not claim ownership of the low-toned, drawn-out voice he uses to direct his hounds, words and commands that to the human ear sound muddled and sing-song but to a hunting hound are clear.

"Even today hunting I remember (South Shropshire huntsman) Michael Rowson's voice," Roberts said, again flapping his hunt whip on his thigh, peering through time as he gazes across the foreign yet familiar Virginia hil ls. Across decades, he said, "I can still hear him. It gives me a tingle to just talk about it."
_ _ _ _ _ _ _

More on the Piedmont