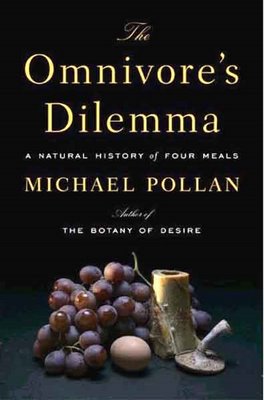 My father used to subscribe to a publication called Organic Gardening put out by Rodale press, and he also had this huge book on composting.

This may not seem like such an odd thing in this day and age, but in 1969 it was an almost subversive thing to subscribe to this kind of publication. It meant, at some level, that you were either a hippie, a free thinker or a bit strange.

What was particularly odd about it is that I have never once seen my father with a hoe in his hand (or even a paint brush), and we were living in North Africa at the time. Whatever organic gardening was about, it did not seem to have too much to do with turning over the soil. It seemed to have something to do with thought -- a way of looking at the world.

As for a 400-page book on compost, that was clearly either madness or a mistake.

At age 10 I did not quite get it, but by age 20 I did. By then I was a pretty good mushroom collector. I even took a course in fungus in college, and once served wild mushroom omelets (clitocybe nuda) with apple sauce (made from found apples) to 100 folks at an eating co-op on campus. No one got sick, the omelets and applesauce were proclaimed excellent, and the total cost was $20 bucks.

A few folks gave me strange looks when they later found out I had collected the mushrooms from a leaf mulch pile near where I had constructed a dog run for my terrier, but what could they say? The food was good and they were very much alive.

Bob Marley died, the hippies disappeared, eating co-ops vanished into the sucking tide of individuality, and I got a job that required a suit, a tie and wingtips.

One day in the 1990s I looked up and it seemed every independent store in America had fallen under the rip tide of corporate America, with Bed, Bath and Beyonds, Starbucks and Best Buy stores shoe-horned into every strip mall. Nothing was "mom and pop" anymore -- it was all Big Corporate.

Meanwhile, something weird was happening to the food. It was subtle. At first it was the ever-expanding sodas and bags of popcorn at the local movie theatre. The cups were now so large they would not fit in the holders.

Hamburgers, which had been discrete human-sized items wrapped in paper, were now so large they were served in Styrofoam boxes. A "Whopper" -- once one of the biggest hamburgers imaginable -- was replaced by the Double Whopper. McDonald's came out with the Big Mac and the Quarter Pounder.

Meanwhile, the grocery store produce section no longer seemed to have seasons. You could get grapes year round, and oranges too. New varieties of fruits and vegetables started showing up. What the hell was Bok Choy and Star Fruit?

On trips across America, I would see fewer and fewer cows and horses. I almost never saw a pig.

Sometime in the 1990s tobacco disappeared in Maryland and Virginia and North Carolina. Only two crops seemed to be grown now: corn and soy. A great deal of land in the Baltimore-Washington corridor, and all along I-95 South seemed to be lying fallow. Old pastures of thick grass reverted to weeds and small bushes.

Flying down the road you could not help but notice that a lot of land was being colonized by dense stands of Virginia cedar.

I would never have thought all this was connected, but after reading Michael Pollan's excellent new book Omnivore's Dilemma, I can see that it is.

When I first heard about this book, I was not all that interested. It was clearly a book written by a “foodie,” and I am pretty much done with food-fadists who think bread is evil, and so too are beef, eggs, milk, and …. My God are you eating an apple? They have Alar on them!

But Fate intervened when I came across the book at a local book store. Reading the back of the book, I realized Pollan was the same fellow who had written "The Botany of Desire" -- a book I found quite well written and entertaining. I flipped through his newest book and saw a section on mushroom hunting. I was in.

My money was well spent. The Omnivore's Dilemma is a terrific book. Roughly structured around four meals, Pollan attempts to trace the food back to its origins. How was this stuff grown? What are the ecological, economic, health, and social trade-offs to eating conventional food from the local grocery store versus "Fresh Fields" (industrial organic), versus artisan foods (local organic) and even hunting and foraging?

The book starts with a chapter on corn, which is so astounding that it alone is worth the price of the book.

And let me hasten to say that while Pollan is squeamish (and almost vegetarian), he went on his first hunt (for pig) while writing this book, and his conclusions are pleasantly surprising. There is only one “perfect” meal in this book, and it does not come from Whole Foods.

The power of Pollan's book is that he connects a lot of disparate pieces into a greater whole.

One small fact-filled mosaic after another is slipped into the frame until at last you have a larger picture of what is happening, not only on America's farms, but also in politics, economics and kitchens.

I had seen bits and pieces of this story myself, but only after reading this book did I understand the big picture of what has been going on all around me my whole life. Good stuff. Not just good writing, but good thinking.

Pollan is not a polemicist, and he does not tie it all up with a "this is what you need to do" kind of ending (thank God!)

In fact, he does not need to. If you read this book, you will get the point and you may actually change what you buy. Grass-fed beef may show up in your cart as well as locally grown vegetables. You may discover the joys of returning to seasonal food selection.

Pollan does not seem to think everyone has to eat the same way, and he does not begrudge those who want to continue to eat as they are eating now.

He suspects, however, that if people knew more about the economics and ecology of corn, and the fakery behind much of the "organic" food being hawked to us today, more people would eat locally, seasonally and healthier (even if not entirely organic).

Suffice it to say, that he made a believer out of me, and I was not a likely convert.

And, for the record, he confirmed what I already knew: My Old Man is a pretty smart cookie and more than a little bit ahead of the curve.