The AKC Embraces the "Big Wink" of Misery Pups 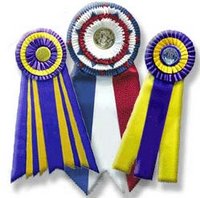 On Thursday the AKC sent out the following notice to AKC Breed Clubs representatives:

"In the past few weeks we have received many comments about this [Petland] agreement, both positive and negative. We have listened to the concerns and because this issue has become so divisive, we believe it is in the best interest of our sport and the American Kennel Club not to go forward with this initiative.
-- Ron Menaker, Chairman of the Board
-- Dennis B. Sprung, President and CEO

They received many positive comments? Really? From whom? Or is this just the flourish of the pen you do before you Eat Crow?

Ironically, the fact that the AKC has decided to scuttle their contract with Petland changes nothing.

As the minutes of the September board meeting of the AKC make clear, the AKC has happily and purposefully derived millions of dollars every year from registering puppy mill dogs, and the Club depends on puppy mill registrations to pay the rent on its rather elaborate offices on Madison Avenue in New York City.

To the AKC's credit, it was -- at last -- putting this in the front window for everyone to see.

Now that brief shining moment of honesty is over -- it's back to the "Big Wink" again.

You see, what the membership of the AKC has NOT done is change the conduct of the AKC. The AKC will continue to knowingly register puppy mill puppies from the Hunte Corporation and from far worse commercial breeders.

The board members of the AKC and the breed club representatives to the AKC have always known that the AKC finances itself through puppy mill registrations of this type.

This information has NOT been closely held information among AKC breed club representatives.

What is being protested by the breed clubs is not the ACTION of the AKC as it relates to puppy mill registrations, but the fact that this action was being made public.

The reason the AKC feels it has to increase the number of AKC puppy mill registrations is that "events" are not paying for themselves. With rare exception, these "events" are dog shows. The net loss due to "events" is now $10 million a year, and to recover this loss the AKC will have to register 666,666 pet shop "Misery Puppies" a year at $15 each.

In short, with every AKC rosette comes a little bundle of puppy mill misery.

Now here's a question: Is it unthinkable to ask AKC event participants to simply pay their own way rather than rely on puppy mill and pet shop registrations?

The "per event" registration cost would have to be raised by $7 per dog just for the current show-ring deficit to be erased.

And remember, if that were done the AKC would still be giving the "Big Wink" to current levels of AKC pet shop and puppy mill registrations. My guess is that the AKC per-event fee would have to rise by an additional $15 per dog for the AKC to be able to afford to drop their endorsement (through routine registration) of puppy mill and pet shop puppies.

Gregg Barrow, a trainer of hounds, Giant Schnauzers and schutzhund dogs (among other things), sent me an email this evening asking why so many folks in the AKC have been willing to look the other way for so long.

Good question. I have spent a lot of time pondering that issue.

I am not sure I have a complete answer, but this is what I shot back to Gregg before I scurried away from the computer for the evening:

I think there are a lot of bits and pieces that have to be disaggregated in the world of dogs and hunting.

Or, to put it another way, there are a number of severable issues.

An ugly dog can hunt, but life is too short to have an ugly dog. Uglyness does not improve a dog's working ability. That said, a dog does not have to conform to a narrow set of arbitrary standards to be a pretty dog. And, ironically, a lot of pretty show ring standards (soft coats and an over-large size in terriers) are actually antithetical to work.

For a lot of people, showing dogs and hunting with dogs has nothing to do with the dogs at all.

I have come to realize that for most people, shows and hunting are a social experience. I hunt alone, but not too many people do. A fellow that hunts alone is unusual to the point of being odd.

For most folks, the dog shows are also not about the dogs -- they are a way of socializing without getting too deeply into anyone's "stuff". When you go to a dog show, notice how many people have crated their dogs or left them in the truck while they spend hours gossiping under the tents. This is about dogs? I don't think so. At the same time, it is not about a deep personal relationship with people. Most of these folks only see each other a few times a year, and are happy to keep their relationships at that level and no deeper.

And, of course, dog shows are also a way of working out a competitive edge and achieving a pecking order. Humans are, after all, pack animals, and we have pecking orders just like dog packs and chicken flocks. Every time people "pack up" at a dog show, they have the hope of achieving a higher ranking this time around.

So a lot of stuff is wrapped up in dog shows, and asking people to give that up by rejecting the nonsense espoused by the AKC is asking them to give up a lot that they have developed over the years -- their community, their identity, their hobby, and their area of expertise. They have painted themselves into an emotional corner.

For AKC breeders and dog shows folks it's hard to face all this. It's much easier to give the "Big Wink" to puppy mills and pet shops than it is to pay more money or walk away from the AKC.

Instead of listening to what is being said about the role of the AKC in keeping the puppy mill business afloat, AKC breeders and show dog enthusiasts prefer to do what little kids do: Put their fingers in their ears and begin chanting or singing until the ugly noise goes away. I cannot hear you!

To read about two breed clubs that have done it differently, and yet still manage to hold a lot of "events" and have publications that are closely read (dream on AKC Gazette) >> Read here

Puppy mills want a monopoly and want your pets pure breed pets spayed or neutered. They like high prices a no competition.

Thank you for advocating for the poor dogs that are put through that. I won't support the AKC, the hunting breed I work with, the good ones aren't to AKC standard's and most of the AKC bred and papered dogs are the but cases that drove their owners crazy in the dog training classes I helped run. I gave up, too depressing to watch people with unreasonable expectations and not want to put the work in blame the dog. The dogs were smarter than the people, true completely wild but smart as a whip.