Shitzhund Work at the AKC 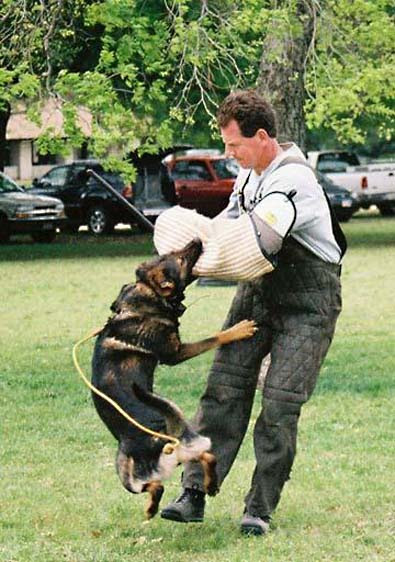 A properly built dog has real drive and power.


In May the AKC decided there was money to be made in Schutzhund, and so they launched a program they are calling "Working Dog Sport."

Without a hint of irony or self-reflection, the AKC writes:

"In keeping with its long standing tradition and history AKC is now proposing the establishment of a 'Working Dog Sport' designed to demonstrate the development and advancement of the skills instincts and teamwork so necessary for use in defending the country and in reacting to threats and attacks against it."

Defending the country? If this country needs AKC dogs for protection, we might as well raise the white flag.

In fact, the Secret Service has abandoned American-bred German Shepherds entirely, moving to import Belgian Malinois from Holland, as the supply of American-bred dogs has been deemed too poor and inconsistent to stomach.

The Dog Scoop Blog thinks it knows why the AKC has moved to embrace Schutzhund work:

"Now, AKC's mutant versions of Dobermans and GSD's can get bite work titles too, in a comfortable, non-competitive environment, to prove the crippled softies really are solid, sound and all-around superior specimens."

If those sound like strong words, then you may be unaware of what the AKC show ring has done to the German Shepherd.

A pictorial history of the German Shepherd in America tells a powerful story in few words: 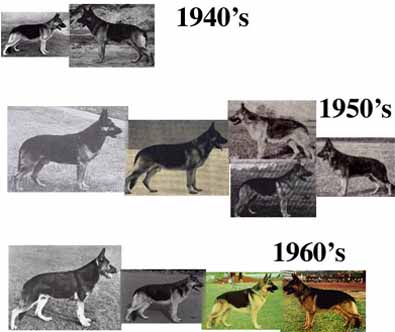 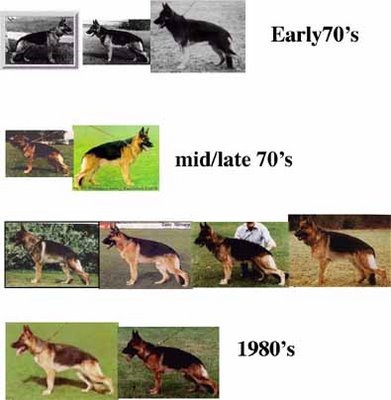 A core problem is that the AKC will register any dog regardless of health or working ability. German registration requires the sire and dam to have their hips x-rayed. and working titles are noted on the registration papers. Only German Shepherds that have passed a Schutzhund test or a herding test are allowed to have their pups registered.

Even in Germany, however, the division street between working dog and show dogs is wide, and I am told that true working German Shepherds are rarely crossed over show stock, no matter that the show dog has a Schutzhund title.

That is not surprising to me. You will almost never see a racing Greyhound, pulling dog or working border collie crossed with an AKC dog, and the same is true in the world of working terriers.

A core problem in the AKC is that the breed clubs are populated by people that have no idea of what their dogs are supposed to do.

That is not been changed by the weak performance trials that the AKC has cobbled together. These trials serve as little more than window dressing to help preserve the fantasy that a show dog can actually "do the job" if given a chance.

In fact, most of them cannot do the job, which is why the AKC has cobbled together "dumbed down" performance tests.

True working retrievers and pointers are being hunted for birds, not ribbons. True working terriers are going to earth in tight natural earths on live quarry that bites back, not sliding down smooth-sided wooden tunnels after caged rats.

"If you want to know if you have a working dog," notes one of my friends with battered boots, "you don't go to an earthdog trial, you go to a hedgerow. It's just not that hard to do."

No, it's not. But unfortunately, the dog cannot drive itself, and not every dog will do. 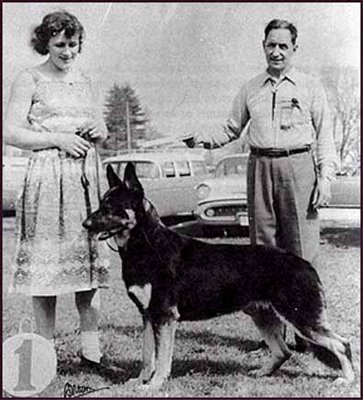 This is what a German Shepherd looked like in 1959, the year I was born. Note the straight back and relatively strong rear end. 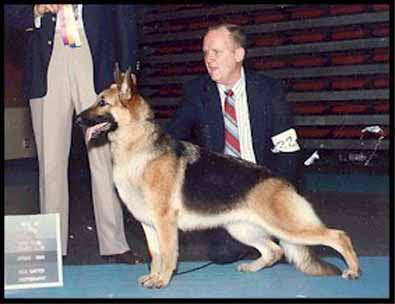 This is a German Shepherd today. Note the roached back and the weak rear end devoid of true drive power.

I did. Besides being a raw feeder's paradise, you never see show-bred GSDs, hideous bully-style APBTs, or other unfortunate canine mutants.

Patrick, I must have missed this post the first go-round.

I believe the pictorial history you've posted shows the degeneration of GERMAN show GSDs over the decades. Its original link-back is broken, so I can't see larger photos or check the source.

The American dogs started looking weird decades earlier. Instead of the "banana back" they have a straighter back and an even more extreme "angulation" in the rear. They tend to be lighter pigmented, have snipier heads, and be weedier than the massive, unbalanced, roached, red-and-black "high-line" dogs from Germany.

I think what you've got there is a timeline of Sieger show winners, not American show GSDs.

I take your word for it. I cannot find the original source, though I did find this nice summary history of the GSD at >> http://www.nsgsdc.com/breedhistory.shtml

From what I can tell the direction and velocity of show GSDs in Germany and the U.S. are slightly different, but both are DOWNWARD in terms of basic structure. Dogs that wobble when they walk is a sign of very bad choices!!

I have a 10 pound Jack Russell Terrier bitch that I know from experience is "properly built". I have had to pull her off of a few unfortunate bigger dogs that got in her face and I cannot describe how much raw power is contained in this tiny terrier. I am 200 pounds and it takes all of my effort to back her down. There is too much evidence now coming into view about kennel club breeding to not reinforce my belief in the " working terrier" as the right way to do things.