Fox in the Hen Harrier House 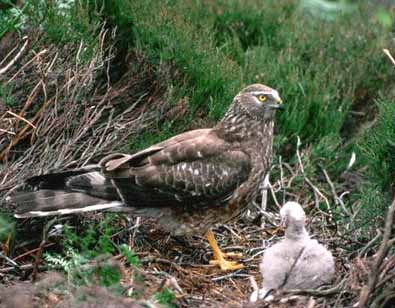 A hen harrier and chick nesting on the moor.


From the Renfrewshire Paisely Daily Express of August 1, 2006:

AS ONE whose work as a countryside ranger involved guarding rare birds of prey at their nests, I was disappointed to read that a family of hen harriers were wiped out by a killer fox at Muirshiel country park.

It’s the second consecutive year that a savage fox has caused carnage among hen harrier chicks at moorland nests among the heather.

Altogether, seven out of eight chicks perished - five mauled and the other two frozen to death when their mothers fled from the fanged forager.

I have happy memories of fast-flying peregrine falcons incubating their eggs on cliff-ledge nests on rocky crags at Muirshiel.

But watching hen harriers at their moorland breeding grounds was the highlights of an ornithological odyssey.

The slate-grey male flew high among the clouds and summoned the female, which is chocolate-brown in colour, with a harsh, chattering cry.

As she flew upwards from the nest, the male dropped a morsel of food – usually a mouse, vole, shrew or lizard – and she caught it in mid-air in her sharp talons.

This bird-bonding act – the celebrated ‘food pass’ of the sky-dancing hen harrier – is one of the most amazing spectacles in the natural world, especially when seen from the Misty Law as the sun rose at dawn above the heather-gilded north-eastern horizon.

There are only about 550 breeding pairs of hen harriers in Britain, including the Muirshiel family.

Persecution by gamekeepers on grouse moors – and the loss of their heather habitats to forestry plantations and sheep-farming – resulted in a massive population decrease during the last century.

Now, because of the killer fox which returned on three successive nights to raid the nest, Renfrewshire's hen harrier breeding population – already at a low level – has been further depleted but the night-time vulpine slaughter.
A few years ago the local foxhounds could have been called out to deal with the killer fox. But urban-based MSPs, who know little about the countryside, banned hunting with hounds.

Now, unless conservationists install anti-fox measures like repellent chemicals, electric wire, netting or strategically-placed lanterns around the nests, the blood-thirsty fox will return to kill hen harrier chicks next year – and the years after that.