A Rare Photo of Laika 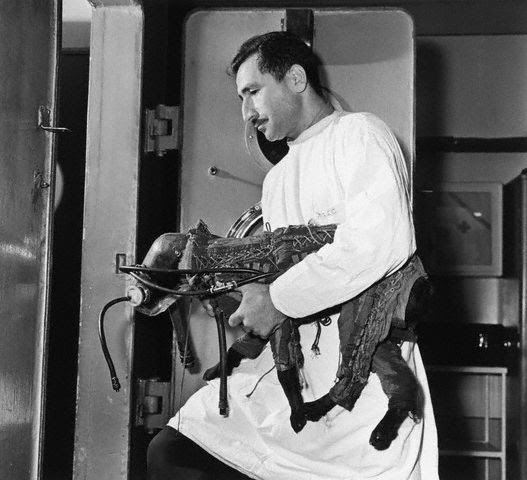 A recycled post from this blog, circa this day in 2005

The above photo is a rare picture of the space-dog, Laika, in her space suit. Though often described as a "husky," Laika was, in fact, a 13-pound, smooth female fox terrier mix which had been a stray on the streets of Moscow. Females were chosen because they did not have to stand and lift their leg to urinate. Astronaut dogs were trained to stay very still for long periods of time (they spent 15-20 days at a time in small boxes) and to wear a pressurized suit and helmet.

"Laika" was launched into space in Sputnik 2 on November 3, 1957. Laika, whose real name was Kudryavka (Little Curly), was dubbed "Muttnik" by American newspapers.

Laika was the first living creature ever to be launched into earth orbit, and it was known that she would die in space, as there was no recovery method for true orbital flight in those days.

At the World Space Congress in Houston in November of 2003, Dimitri Malashenkov of the Institute for Biological problems in Moscow finally revealed that immediately after launch Laika's capsule reached speeds of nearly 18,000 miles per hour. As the pressure in the capsule increased, Laika's pulse rate increased to three times its normal level. Five to seven hours into the flight, no life signs were evident, and it is believed Laika died of over-heating, stress, and pressure. Sputnik 2 fell back to earth on April 14, 1958 -- four and a half months after leaving earth -- and burned up on re-entry.
.

A laika is a husky-type dog, usually used for hunting. That dog clearly was no laika.

The Siberian husky is derived from a strain of East Siberian laika that were used for hauling.

These dogs were kept by the Chukchi people of the Anadyr Valley.

Nick Abadzis wrote/drew a very moving graphic novel about Laika. It's not so much about the dog (Abadzis pulls no Disney-fied punches with her) as it is about the people who came into contact with her during her short life (and the questions that all people who work with lab animals must ask themselves). It's really well-done.

In the book mentioned above, Oleg Georgivitch Gazenko says "We did not learn enough from the mission to justify the death of the dog."

may Laika dance with the stars.

This dog is NOT Laika...it is a dog being placed into a hyperbolic chamber circa 1954 (much earlier than Laika). Laika was mostly white and this dog has black fur. Dogs like this, in the earliest stages of Soviet research, made Laika's flight possible on Nov 3, 1957.