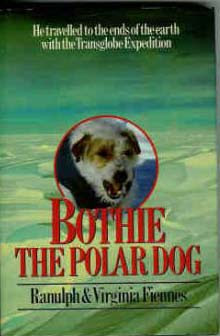 Bothie, the Jack Russell Terrier, went round the world with the Transglobe Expedition and is the only dog to have ever left his paw prints on both North and South Poles.

Bothie's owners, Ranulph and Virginia Fiennes, took a three-year expedition around the world via the poles, and took Bothie along for the polar ends of the ride (he skipped Africa, as it was too hot).

The trip started in 1979 when Bothie was two years old. The dog had been found in 1977 as a four-week old pup, running loose in a Hampshire village, and was given to the Fiennes as a present. They named it Bothie -- a colloquial term for an outhouse.

While on board ship Bothie wore a harness safety, like everyone else, and he was smart enough to make special friends with the cook. Bothie had a special polar suit and boots made for him (complete with Baclava) to keep him warm in Antarctica.

Bothie was not much of a hunter -- his response to his first Antarctic penguin was retreat at full speed.

After the Antarctic, Bothie's next stop (some time later) was the Yukon where he made friends with a large black dog that was a cross between a Newfoundland and Husky X Labrador. The two dogs became inseparable.

In 1982, after coming back to the UK from his trans-polar expedition, Bothie was voted "Pet of the Year" and the Chairman of the Kennel Club invited Bothie to do a "circuit of honour" and present a prize at the 1983 Crufts Dog Show.