There's a history of working coyotes with lurchers and long dogs in the American west. The top five pictures in this post were taken in Montana between 1910-1920, and some of the other photos were taken in Nebraska and Colorado. Several have an unknown origin (I keep these things pretty randomly on my hard drive as I come across them).

Lurchers and long dogs still run coyote in the American West, along with jack rabbits, which are actually a kind of hare. The American dogs are mostly greyhound and staghound crosses, and tend to be a little bigger than their UK counterparts.

While a red fox anywhere in the world, averages 12-15 pounds, a western coyote weighs an average of 35-45 pounds, and the eastern variant runs even larger (45-55 pounds).

Two running dogs are generally required to take down a coyote and avoid injury to the lurcher or long dog. Even absent a run-in with barbed wire, the potential of getting a dog wrecked working coyote is enough to give most people pause.

A coyote is a serious animal -- it is not a big fox. 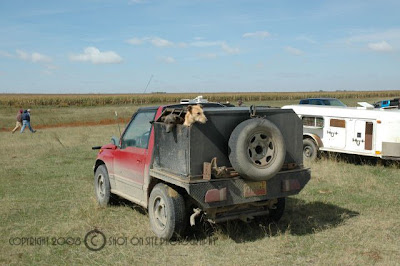 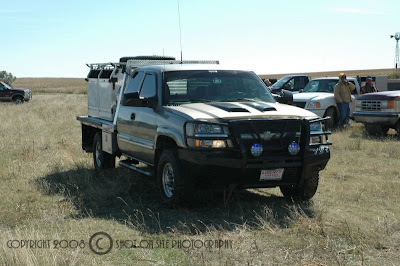 The pictures, above, shows a pair of modern American coyote trucks -- a Geo Tracker on top, and a larger Chevy truck on the bottom. The dogs are loaded in the back and released with the pull of a string when a coyote is spotted in the basin-and-range country of the American west. These pictures are from Dan Gauss, whose Shot on Site blog is in the blogroll on right, and there are more pictures here. All these shots were taken at the annual coyote hound swap meet and races held in Loomis, Nebraska on the first Friday-Saturday of October by Dan.

The land here in the U.S. is so vast here that most people in Europe cannot fathom it. To put it in perspective, the U.S. is more than 66 times bigger than England, and 38 times bigger than all of the UK. All of the UK, with a population of over 60 million, is smaller than Oregon, which has a population of over 3.5 million . . . and Oregon is crowded when compared to states like Wyoming, Montana, South Dakota, North Dakota, and Idaho.

The pictures below are from the Badlands Tradewinds Kennel in South Dakota, and show modern U.S. coyote-lurchers. As you can see, not much has changed from 100 years ago.

Coyotes now reside in every state of the Union except Hawaii, and some states will actually pay you to kill them (my home state of Virginia has a bounty on them, for example). That said, despite the fact that 500,000 coyotes a year are taken in the U.S. (mostly by gun and trap), the numbers keep going up.

Teddy Roosevelt devotes chapter III (Wolf-Coursing) to the traditional longdog culture in the American West, which was already well established by the time he wrote about it.

"Outdoor Pastimes of an American Hunter" contains several good pictures of staghounds and greyhounds at work between mounted ranch hands. I've seen a hundred "Westerns" from Hollywood and not one with a staghound in it. What a shame!

To Matt M. I'm sorry to have to tell you this,but I did see on a Western movie a DEERHOUND running ahead of a group of cowboys,the SORRY is I didn't get the name of the movie,I have tried my best to run it down,but no luck. I saw it on TCM a while back,you might want to follow thru and see if you could find it. The scene was were a (posse) was chasing someone or going somewhere in a hurry,when all of a sudden a (Stag) looking dog appeared in front of the riders,it was short but enough for me to jump up and take notice.In the next camera take the dog was gone? I'm still looking for the movie.If you find it before I do Email me PLEASE It was a good shot of the dog but short.