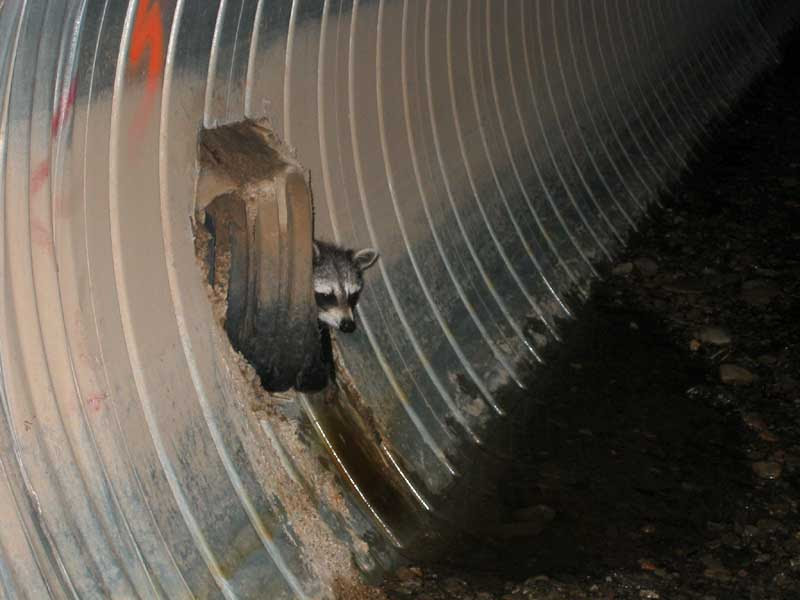 It's been over a year since I've dug on a raccoon on one of my farms -- I'm not sure what the deal is, but I suspect it's distemper sweeping through the countryside as it does every four or five years -- or perhaps it is rabies, though reports are that those numbers are down to aerial baiting.

Who knows? All I can report for sure is that while I have found some dead raccoons in the hedgerows, live ones living in groundhog holes seem to be in short supply on the farms I hunt. I am not seeing many dead on the roads either, come to think of it.

We have some urban raccoons near my house down by the river, however - they live in a few sections of the rock cliffs that rise 80 feet from the Potomac River flood plain. Nobody knows the den holes are there because you have to climb up a steep dirt and tallus slope to find them, and even then most people do not know what they are looking for -- or what they are looking at if they reach them. The holes were probably dug by groundhogs -- a few seem to be in more-or-less permanent residence on the flood plain.

The raccoons have a neat little way of getting up into the neighborhoods from the river -- they travel the storm sewer culverts which are warm in winter and cool in summer. No doubt these culverts provide their own food sources -- worms, crickets, mice, old chicken bones, etc.

If the storm pipes happen to be short on food for some reason, there are always the trash cans of suburbia and the odd dog bowl as well -- just keep going up the pipe and roll out of the storm drain right next to a trash can.

Though raccoons may not have formal calendars with the days of the week on them, I suspect they are smart enough to figure out a weekly trash schedule that never varies from one year to the next.

I have worked the raccoons down by the river a few times, but it's a risky business since the stone is quite solid and cannot be easily broken and there is not much room to stand to swing a tool. No quarry is worth risking a dog over, and I now give the river-rock-dwellers a free pass even though they are within walking distance.