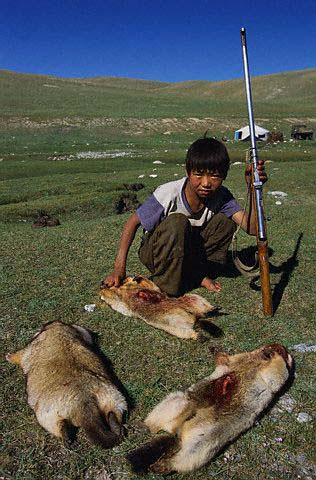 A young Mongolian sharpshooter with Tarvags bound for the pot.

Two thousand years ago Herodotus told a tale of large furry ants that enriched the Persian empire by burrowing for gold.

According to Herodotus, the "ants were bigger than foxes, but smaller than dogs".

Herodotus's story inspired generations of treasure hunters and explorers going all the way back back to Alexander the Great.

Classical scholars assumed Herodotus was either a liar or a very gullible believer of fables. In fact, Herodotus was right -- it was the translators that were wrong.

It turns out that the "golden ants," were actually marmots that burrow into a gold-bearing stratum of sandy soil that lies just a few feet underground in much of Central Asia. The ancient Persian word for marmot, translates into "mountain ant".

The "Mountain Ant" of Pakistan is a close relative of the the North American Groundhog (Marmota Monax) and the Tarvag (Marmota sibirica).

The Tarvag and other Central Asia Marmots are hunted for food and for their fur, which -- if it is not used locally for fur coats -- is sheared, dyed and exported as "imitation marten."

It was fleas on the shipped hides of Mongolian Tarvag that first brought the Black Plague to Europe. The Tarvag is the natural home of Yersinia pestis -- the bacterium that inhabits the Xenopsylla cheopsis flea that thrives on Tarvag.

When dead Tarvag hides were shipped to Europe, Xenopsylla fleas leaped off the dead hides and reproduced on the Black Rat (Ratus ratus) which it found to be a suitable host.

The Bubonic Plague swept through Europe with the Black Rat until the Black Rat itself was driven out of Europe by another import -- the Norwegian Rat (Ratus norvegicus), which probably originated in the Middle East.

With the arrival of the larger and more aggressive Norwegian Rat, the smaller and more docile Black Rat was pushed out of Europe, and the era of Bubonic Plague infestations in Europe ended.

The Black Rat and the Xenopsylla flea rode the train into the deserts of the American Southwest shortly after arriving in the U.S., and today the Bubonic Plague is a permanent feature of Prairie Dog towns and, to a lesser extent, Richardson's Ground Squirrel colonies, in the American West.

Could the Plague come East to take up residence on the common Groundhogs? For some reason this has not yet happened. It's hard to know what the barrier is, but the Xenopsylla flea may not find the Groundhog a suitable host -- fleas and lice are often host-species specific, and most will live on only one or two kinds of animals and no others.

Another problem may be that it is simply too wet and cold for the Xenopsylla flea to thrive in an eastern North American hedgerow. The Plague bacillus and its host flea generally thrive in desert or near-desert conditions.

Though Europe is as cold and wet as the Eastern U.S, the Black Rats of the Europeam Middle Ages tended to live under warm and dry roofs. The Xenopsylla flea apparently found this habitat quite suitable, while a wet and frozen hedgerow is the exact opposite of what the flea is looking for.

Another bit of good news is that today the Bubonic Plague to treatable with massive amounts of antibiotics, provided patients seek medical attention and doctors properly diagnose the problem.
This is a repost from January 15, 2005.
..