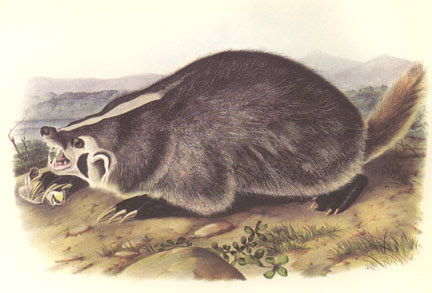 In a December 29, 200 article in the Idaho Falls Post Register, Charlene Kaserman compares the British badger with its American counterpart:

"Comparing the American badger to its British cousin (Meles meles), sometimes called a brock, is rather like comparing a high-speed blender to a swizzle stick. The Mr. Badger, of 'Wind in the Willows,' is far milder and much more gregarious than his American counterpart. The brock's face is white with black stripes on either side, and the face and body are slender, more weasel-like. The brock lives in a more or less permanent system of burrows and shares its quarters with others. The American badger is solitary, always on the move, traveling perhaps five to eight miles a night and digging a new burrow each morning to hole up in through the day. Some British householders hand-feed their resident brocks. Anyone taking a notion to hand-feed an American badger would probably be better served by putting his hand directly into a buzz saw."

I see that this blog is 12 years old but in the time since this post, the nature of the American Badger has proven to be much more friendly and social than previously thought, especially towards humans. In fact, they have been shown to even become pet-like in the frontier when humans take pains to interact with them peacefully. That said, they are, of course, wild animals and should be treated as such, with caution and respect. But they are creatures that should not be harrassed nor killed as they are a valuable part of the ecosystem that includes rodent reduction and they reduce the snake population, yes rattlesnakes as well. If you need evidence, there is a youtube clip of a badger that came unsolicited to a family in the American West an befriended them and even their dog for almost a year before it left as mysteriously as it came. Enjoy!