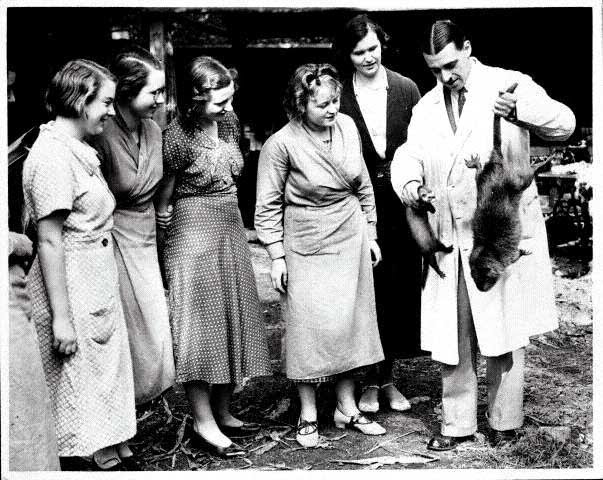 The Nutria or Coypu (Myocastor coypus) was first brought to the United States from South America by the McIlheny family, of Tabasco Sauce fame. Their idea was to start a fur farm on Avery Island, Louisiana. Unfortunately, in 1941 a hurricane blew in and wrecked the cages, releasing about 150 nutria into the local marshes.

Nutria are considered a serious pest. Wherever they have gone, there has been a steep decline in muskrat populations, with whom they directly compete. In addition, nutria are voracious eaters of vegetation and are capable of cutting huge holes in marshes, leading to increased soil loss, shell-fish deaths, lost fish spawning grounds, and lost song and game bird habitat. Not for nothing are they sometimes called "that rat that ate Louisiana".

On the up side, there is little doubt that the introduction of the nutria has had a very beneficial impact on the American alligator, whose numbers were pushed perilously close to the edge in the 1960s, but which are now in superabundance thank to better game management laws and a steady supply of nutria (as well as cats, possums, small dogs, raccoons, turtles and fish).

Efforts are underway to wipe out the nutria in Maryland, where populations have been destroying the Blackwater Wildlife Refuge. In the American South (Louisiana, Florida, Mississippi, Texas, Georgia) it is probably impossible to turn the tide, no matter how many conibear traps are set out.

Nutria were introduced to England sometime prior to 1944, when a few escaped from a Sussex fur farm, but they were exterminated by 1988 thanks to a concerted trapping campaign.

The nutria is not considered much of game animal by those that have worked other terrier quarry. Despite the fact that the Jack Russell Terrier Club of America is headquartered about 45 minutes away from very large and thriving nutria colonies where a very aggressive trapping regime is now underway, the JRTCA does not list them as a species they will give a working certification for. I am told that this is because the dens they inhabit are generally so shallow and large that working them is not really earth work. The American Working Terrier Association also does not give a working certification for nutria.

In The Working Terrier, Brian Plummer notes that nutria make a great deal of noise chattering their teeth, but that this largely bluff.

“Coypu are not particularly exciting animals to hunt. Their burrows are large and not especially deep, so there is little chance of a dog getting trapped while hunting them. Furthermore, the coypu is reluctant to fight and much prefers to bolt if it encounters a terrier. Bites from coypu are never really serious, though pieces of the incisor sometimes break off and remain in wounds, causing sepsis. Wounds are rarely more than skin deep, for, in spite of its rat-like appearance, the coypu is unable to mete out the savage wounds of which the brown rat is capable. . . . the coypu can scarcely be called a sporting animal.”

Others, of course, disagree. That's what makes the world go 'round. If they ever stop setting conibear traps at Blackwater Wildlife Refuge, maybe I could find out for myself. Until then, it strictly dry land for the dogs.

A few years back, Calvin Trillin wrote a long piece for The New Yorker about the State of Louisiana's attempt to interest the chefs of New Orleans into finding creative ways to cook nutria.

Perhaps it was in that article or some other where they said we exported something like 2 million nutria a year, and not all for pelts? My memory is blurry, but I think they said they froze them and sent them to China where they were eaten? Anyone have a source for that, or am I just remembering this wrong? What they said would happend to me in the 1970s has finally happened. :)

I recall articles in Texas Parks and Wildlife Magazine back in the 70's which contained recipes for nutria and encouraged their harvest. I think I recall similar articles about sharks, too.

Thanks for a great article. We have one rogue Nutria at the park that's been charging people and dogs. I've been giving him wide bearth with my 2 two Rat Terriers because those front teeth look a little scary. Unfortunately everyone avoiding him seems to be making him braver.

My female RT has killed squirrels in the backyard and really, REALLY wants to have it out with this renegade, but I've held her back and walked around him. Maybe I'll let her have a go at him next time.