Getting From There to Here 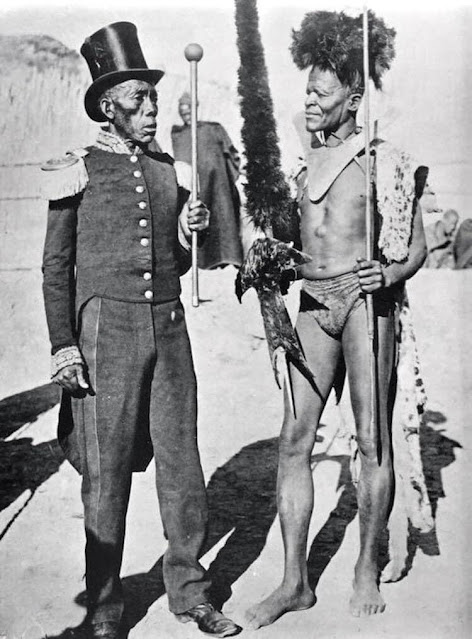 The picture is of Chief David Mashupha of Basutoland (Lesotho), at left, with one of his generals in 1900.
I was born 59 years later and not too far away (by Africa standards).
Colin Turbull once observed that there was a loneliness in the heart of the African of his era (1962) in that they knew their past was in leather shields but that their future was in Cray computers.
How could they possibly get from one to the other?
Today, I hop in a taxicab driven by a Nigerian, and I make a joke that  Lagos’ “go slow” is better named than our “rush hour.”
He laughs, and is amazed I know.
I make another joke: We  are the same age.  We know things. For example when we get a spam email saying a bank official in Ghana has just discovered someone without any relatives has died and there’s $20 million for us to pick up if we will just send $500 for taxes, we are quite thrilled.  Not because we are going to be millionaires, but because we have visible proof that West Africa is running riot with computers! Amazing!
Almost every country in Africa has lower birth rates than Al Gore’s wife, and the infant mortality rate is generally lower than when I was born.
The average person in Rwanda has a much better internet connection than folks in North Dakota or Highland County, Virginia.
Another taxicab and another New American from Africa. He’s from Sierra Leone.
I tell him I remember when an African election was overturned and the candidate with less votes was put in power with the help of his governor brother and his former president father who used to be in charge of the Secret Police and who nominated the court that swung the election for his son.
Oh, did I say Africa?  I meant the United States in 2000, when George W. Bush was put in office with the help of his brother Jeb Bush, governor of Florida, and his former president CIA director father, who helped put 4 people on the Supreme Court that moved to moot an election in Bush v Gore.
He laughs. I laugh. Better to laugh than to cry, I suppose.  We are brothers after all.