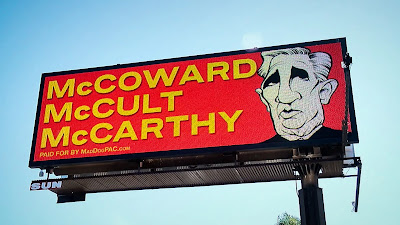 Congressman Kevin McCarthy wants to be Majority Leader of the US House of Representatives, but there’s just one problem:  he’s not a leader.
McCarthy wants to negotiate his way to leadership.
He’s trying to compromise, shade, fold, and wheedle his way into the Top Dog position.
It’s not going well.
To be fair, Kevin McCarthy suffers from a common foible.  The notion of "leadership" runs riot in a lot of people's heads.
In the modern world, too many people eschew leadership. They want everyone to be equals, and they want every little thing to be talked out and negotiated.
What does that mean for children or the infantile Republican caucus?
It means if you tell your teenager they need to be home by 10 pm, but move the hour to 11 pm after a half hour of argument, you are teaching your child that arguing works -- and you are sure to get a lot more of it!
The same goes for QAnon crazies.
Kevin McCarthy has folded to lunatic minority demands and is perplexed that he has *lost* ground and not gained it.
But think about it:  he’s been *rewarding* bad behavior.
He’s “click and treated* every chaos agent, attention-whore, and fuck-wit in his party.
Of course he’s getting more blow back, hand biting, and leash reactivity.
Consider this: your refrigerator door is probably a better dog trainer than you are, and certainly a better Majority Leader than Kevin McCarthy.
For your dog, the refrigerator door should be the most important door in your house. Behind it lies every type of food your dog has ever dreamed of.
And yet, your dog never barks at the refrigerator door, and *always* barks at the back door to be let back in.
What’s the difference between these two doors?
Simple: your dog knows the refrigerator door will *never* open no matter how long it is barked at.
The back door?  You’ve taught the dog the key is to bark somewhere between 1 and 500 times to get that door to open.  If the dog barks long enough, that door will *always* open.
When your refrigerator says NO, it means NO.
When your back door says NO, it means “just bark a little longer.”
In some people's minds, absolutism (commandments rather than suggestions) smacks of "authoritarianism." They think there should be some give and take with the dog.
Here we come to the root of so many problems: Vacillating people who are unable to send consistent signals on the front end, and who are unable to deliver consistent consequences on the back end.
That’s Kevin McCarthy.
Let's think about kids again.
Your teenager borrows the car and does not come home at 11 pm, as agreed, but sneaks in the back door at 3 am.
Best to ignore it, right?
If you do, see if you do not get more of it!
Self-rewarding behavior can only be stopped with consistent punishment.
And so it is with dogs and lunatic members of Congress.
Slip a simple chain slip collar on a dog, and give a decent jerk every time the dog pulls at the end of the lead, and your dog will straighten up and be walking at your side in no time.
Reward it with a small piece of hot dog, or a scratch on the head when it walks slightly behind you on a loose lead, and he will get the message even faster.
But Kevin McCarthy is not doing any of that.
He’s trying to negotiate with biting dogs, tossing them a bit of kibble every time they bite him a little less hard.
A Republican member of Congress has lied his way into his Long Island congressional seat?  Silence.
Another Republican member of Congress pays teenage girls to have sex with him?  Silence.
Kevin McCarthy just ignores the behavior — and is surprised when he gets more of it.
And so we come back to it:  Kevin McCarthy is no leader. He’s a spineless appeaser who is going to killed and eaten by a feral pack of Republican chihuahuas.