The Cry Baby and His Complicit Collaborators 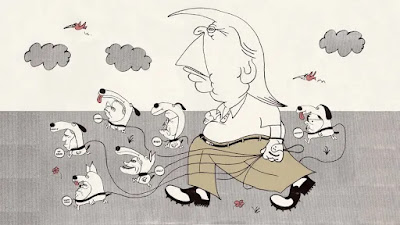 From The Atlantic comes this profile by Mark Leibovich of America's weakest men:

Trump said and did obviously awful and dangerous things—racist and cruel and achingly dumb and downright evil things. But on top of that, he is a uniquely tiresome individual, easily the sorest loser, the most prodigious liar, and the most interminable victim ever to occupy the White House. He is, quite possibly, the biggest crybaby ever to toddle across history’s stage, from his inaugural-crowd hemorrhage on day one right down to his bitter, ketchup-flinging end. Seriously, what public figure in the history of the world comes close? I’m genuinely asking.

Better objects of our scrutiny — and far more compelling to me — are the slavishly devoted Republicans whom Trump drew to his side. It’s been said before, but can never be emphasized enough: Without the complicity of the Republican Party, Donald Trump would be just a glorified geriatric Fox-watching golfer. I’ve interviewed scores of these collaborators, trying to understand why they did what they did and how they could live with it. These were the McCarthys and the Grahams and all the other busy parasitic suck-ups who made the Trump era work for them, who humored and indulged him all the way down to the last, exhausted strains of American democracy.