A Few Words About Comments and Time Wasters 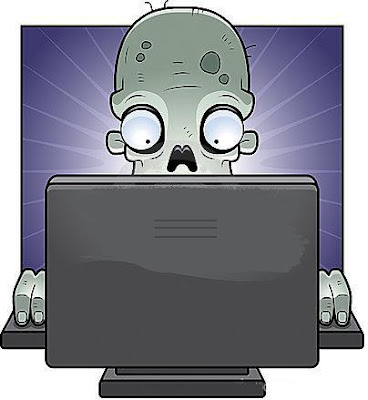 This blog has a "no zombies" and "please use the Google" policy that is rather emphatically stated, and if people do not read it and do not honor it, I do not waste one second on them.

Over at Stonekettle Station they have a very nice succinct version which can be summarized as: "don't be a dick."

Over at Patheos, the deletion of a comment launched a small meditation, which seems to end with "go fuck yourself and start your own damn blog."

Over at Gene Expression on the Discovery magazine blog, however, they explain the mathematics behind the sensible and experienced blogger's rudeness:  there are simply far more prattling idiots than there are hours in the day, and we bloggers are in an asymetrical war with the time-wasters:

Over the 10 years of running my own blog(s) I’ve shifted in my own perspective and outlook. In the beginning I was rather laissez faire. But it became rather obvious that most people were either stupid or ignorant, or, they took advantage of the anonymity of the internet to waste other peoples’ time. The biggest issue which I think some readers don’t seem to internalize well is that not only am I engaging comments, I’m also writing. This means that I’m spread rather thin, so the situation of me interacting with a given commenter is never symmetrical. So, to give a non-hypothetical, if I ask you for some citations and you spend 10 seconds, I’m going to get rather ticked off. I spend hours writing, and then responding to commenters who are clear and sincere. In contrast, other commenters do step up and add value when I ask pointed questions.

In real life most people are not worth deep engagement because they’re dull or incurious, or, our interests do not overlap (i.e., I’m incurious about their topics of passion). It’s no different on the internet. Sitemeter says thousands of people read the content on this weblog per day. The vast majority do not leave comments, obviously. I’m glad for that.

Please do not take this as a stick in the eye.  I am always happy to hear sensible things, to get additional information, to hear about errors of fact with citations to reputable sources, or to be told I am smart, have lost weight, and put on an amazing tie this morning.  But please do not waste my time because you are bored and want to argue, or are too lazy to use the Google.  Time is more precious than gold, and I will not have mine stolen by fools.

And might I say that I hope you will embrace a similar world view in your own daily endeavors?

Try to get something done! Build foward, steer around the obstacles thrown in the road, and leave a few good words to those who show up early, stay late, and work hard in between, especially if those people happen to be at the bottom of the economic ladder.

Eschew the crazy, hazy and lazy, and the nattering nabobs of negativism that seem to be all around us all too often.  Help someone out, and do a little service.  Lean forward.